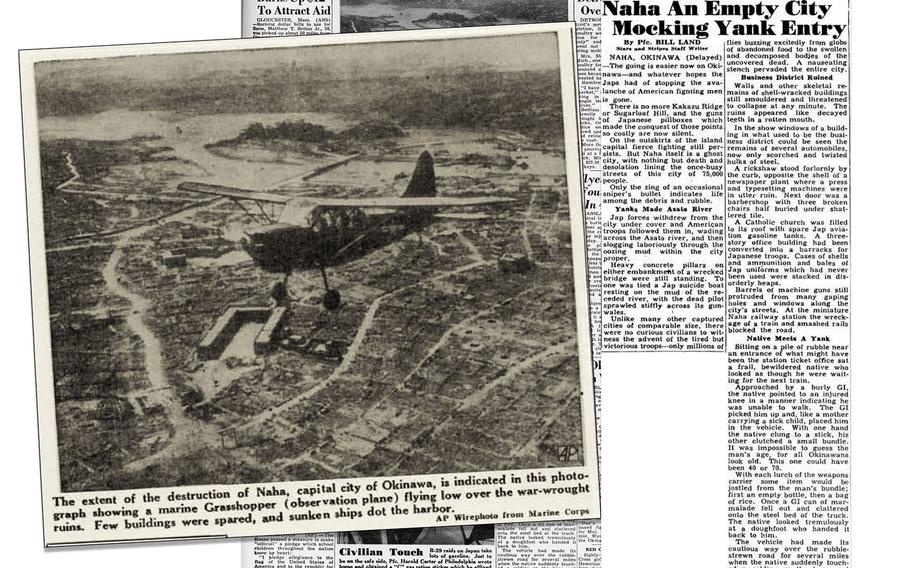 NAHA, OKINAWA (Delayed) – The going is easier now on Okinawa – and whatever hopes the Japs had of stopping the avalanche of American fighting men is gone.

There is no more Kakazu Ridge or Sugarloaf Hill, and the guns of Japanese pillboxes which made the conquest of those points so costly are now silent.

On the outskirts of the island capital fierce fighting still persists. But Naha itself is a ghost city, with nothing but death and desolation lining the once-busy streets of this city of 75,000 people.

Only the zing of an occasional sniper’s bullet indicates life among the debris and rubble.

Yanks Made Asato RiverJap forces withdrew from the city under cover and American troops followed them in, wading across the Asato river, and then slogging laboriously through the oozing mud within the city proper.

Heavy concrete pillars on either embankment of a wrecked bridge were still standing. To one was tied a Jap suicide boat resting on the mud of the receded river, with the dead pilot sprawled stiffly across its gunwales.

Unlike many other captured cities of comparable size, there were no curious civilians to witness the advent of the tired but victorious troops – only millions of flies buzzing excitedly from the globs of abandoned food to the swollen and decomposed bodies of the uncovered dead. A nauseating stench pervaded the entire city.

Business District RuinedWalls and other skeletal remains of the shell-wracked buildings still smoldered and threatened to collapse at any minute. The ruins appeared like decayed teeth in a rotten mouth.

In the show windows of buildings in what used to be the business district could be seen the remains of several automobiles, now only scored and twisted hulks of steel.

A rickshaw stood forlornly by the curb, opposite the shell of a newspaper plant where a press and typesetting machines were in utter ruin. Next door was a barbershop with three broken chairs half buried under shattered tile.

A Catholic church was filled to its roof with spare Jap aviation gasoline tanks. A three-story office building had been converted into barracks for Japanese troops. Cases of shells and ammunition and bales of Jap uniforms which had never been used were stacked in disorderly heaps.

Barrels of machine guns still protruded from many gaping holes and windows along the city’s streets. At the miniature Naha railway station the wreckage of a train and smashed rails blocked the road.

Native Meets A YankSitting on a pile of rubble near an entrance of what might have been the station ticket office a frail, bewildered native who looked as though he were waiting for the next train.

Approached by a burly GI, the native pointed to an injured knee in a manner indicated he was unable to walk. The GI picked him up and, like a mother carrying a sick child, placed him in the vehicle. With one hand the native clung to a stick, his other clutched a small bundle. It was impossible to guess the man’s age, for all Okinawans look old. This one could have been 40 or 70.

With each lurch of the weapons carrier some item would be jostled from the man’s bundle; first an empty bottle, then a bag of rice. Once a GI can of marmalade fell out and clattered onto the stell bed of the truck. The native looked tremulously at a doughfoot who handed it back to him.

The vehicle had made its cautious way over the rubblestrewn road for several miles when a native suddenly touched a soldier on the knee and pointed to a littered pile of lumber and masonry with an excited flow of gibberish.

Later an interpreter said the native was pointed out his home.