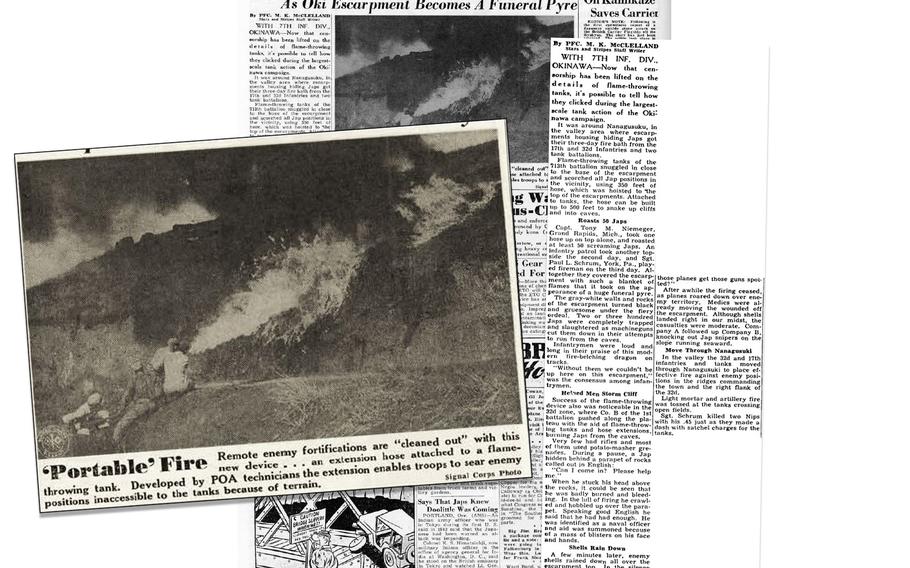 WITH 7TH INF. DIV., OKINAWA – Now that censorship has been lifted on the details of flame-throwing tanks, it’s possible to tell how they clicked during the largest-scale tank action of the Okinawa campaign.

It was around Nanagusuku, in the valley area where escarpments housing hiding Japs got their three-day fire bath from the 17th and 32d Infantries and two tank battalions.

Flame-throwing tanks of the 713th battalion snuggled in close to the base of the escarpment and scorched all Jap positions in the vicinity, using 350 feet of hose, which was hoisted to the top of the escarpments. Attached to tanks, the hose can be built up to 500 feet to snake up cliffs and into caves.

Roasts 50 JapsCapt. Tony M. Niemeger, Grand Rapids, Mich., took one hose up on top alone, and roasted at least 50 screaming Japs. An infantry patrol took another topside the second day, and Sgt. Paul L. Schrum, York, Pa., played fireman on the third day. Altogether they covered the escarpment with such a blanket of flames that it took on the appearance of a huge funeral pyre.

The gray-white walls and rocks of the escarpment turned black and gruesome under the fiery ordeal. Two or three hundred Japs were completely trapped and slaughtered as machineguns cut them down in their attempts to run from the caves.

Infantrymen were loud and long in their praise of this modern fire-belching dragon on tracks.

“Without them we’d couldn’t be up here on this escarpment,” was the consensus among infantrymen.

Men Storm CliffSuccess of the flame-throwing device also was noticeable in the 32d zone, where Co. B ofo the 1st battalion pushed along the plateau with the aid of flame-throwing tanks and hose extensions, burning Japs from the caves.

Very few had rifles and most of them used potato-masher grenades. During a pause, a Jap hidden behind a parapet of rocks called out in English:

When he stuck his head above the rocks, it could be seen that he was badly burned and bleeding. In the lull of firing he crawled and hobbled over to the parapet. Speaking good English he said that he had had enough. He was identified as a naval officer and aid was summoned because of a mass of blisters on his face and hands.

Shells Rain DownA few minutes later, enemy shells rained down all over the escarpment top. In the silence between screaming shells a man nearby kept repeating aloud “The dirty so-and-sos. Why don’t those planes get those guns spotted?”

After awhile the firing ceased, as planes roared down over enemy territory. Medics were already moving the wounded off the escarpment. Although shells landed right in our midst, the casualties were moderate. Company A followed up Company B, knocking out Jap snipers on the slope running seaward.

Move Through NanagusukiIn the valley the 32d and 17th infantries and tanks moved through Nanagusuki to place effective fire against enemy position in the ridges commanding the town and the right flank of the 32d.

Light mortar and artillery fire was tossed at the tanks crossing open fields.

Sgt. Schrum killed two Nips with this .45 just as they made a dash with the satchel charges for the tanks.