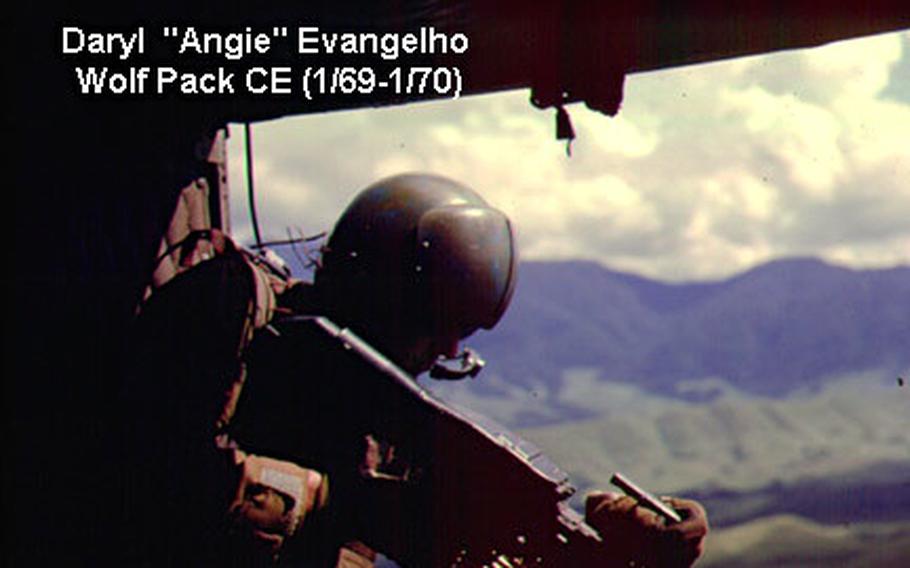 Editor's note: Daryl Evangelho originally shared this story with Legion.org, which is unaffiliated with this project.

“Death on call” was the motto of the Wolfpack gunship platoon of the 281st Assault Helicopter Company. The company arrived in Vietnam in June 1966 and departed in December 1970.

In the fall of 1969, the North Vietnamese army held a large-scale operation northwest of Ban Me Thuot in central Vietnam. So pervasive was the operation that no U.S. army helicopters were allowed to fly in the area. That included medivac and supply missions. The only U.S. helicopters permitted to operate were gunships. It was all “top secret.”

Capt. Jim Brown (now deceased), our gunship platoon leader, and us were tasked with providing aerial support to the isolated outposts manned by U.S. personnel that were in imminent danger of being overrun. I asked Capt. Brown how long we were going to be out on this mission and he replied, “If we make it for three days, then we will be relieved by another crew.”

I vividly remember the trepidation and fear I felt, unlike any other mission I flew in Vietnam. If we got into trouble, we knew there would be no chance of rescue from medivac or any UH-1 helicopters in the area.

We made it to Bu Prang in the early hours of Thanksgiving Day 1969. While Duane Brudvig (now deceased), our gunner, and I were refueling our helicopter, another gunship (who we were relieving) was refueling next to us. While talking to their crew chief, he raised his shirt up to show us a bruise on his chest the size of a watermelon. He had taken a round earlier that day, and his chest protector saved his life.

The outpost on top of a small volcano-like hill was manned by U.S. personnel who had been under intense attack from the North Vietnamese occupying the surrounding hilltops only a few hundred yards from their position. They were being attacked by mortars, rockets, etc. So intense was our engagement with the enemy that we had to return to Ban Me Thuot twice to rearm and refuel. Those personnel on the hill called in gunships and F4 phantom jets to suppress the enemy.

After the F4 phantom jets left, we headed into the volcano-like area at treetop level and all hell broke loose. Rounds were bursting up through the floor of the helicopter between my legs. I immediately returned fire, listening to Ken Miller (our pilot) say, “May day, May day, we are going down.” Glancing at the control panel, the lights were blinking red, indicating that we were crashing.

After crash landing, we jumped out, taking as much ammunition as we could carry. We took up defensive positions around the helicopter and were now surrounded by an enemy force that we had been fighting most of the day. We were within hand-grenade range of numerous spider holes occupied by the North Vietnamese army. An intense ground battle ensued for at least half an hour. We eliminated the enemy in the spider holes, but we were still receiving fire from the tree line and surrounding enemy positions. Duane and I left our defensive positions many times to return to the helicopter to get more ammunition, since we had full mini gun trays sitting in the aircraft to use in our M-60 machine guns.

Robert George (now deceased), pilot; Larry Elam, crew chief; Jackie Keele, pilot; and Red Vandervene, gunner, were flying over us to protect us while waiting to be rescued, but no one was coming. George’s mini guns were shot out and he was running out of fuel. Realizing that no one was coming to rescue us, George landed a few yards away from us, just as the enemy was getting closer to our defensive positions. The four of us ran and jumped into his helicopter. So close was the enemy, the skid of the aircraft hit an enemy soldier in the chest when we took off. For our heroics that day, Bob George received a Silver Star, and the rest of us received a Bronze Star with a V device for valor.

Thirty-five years later, we found out that the U.S. outpost we had been defending that day, was overrun and all personnel were killed.

There is not a Thanksgiving Day that each of us still living does not think of that day that we were shot down, surrounded, and made it back to our post to eat our Thanksgiving dinner out of a can. We had everything to be thankful for!