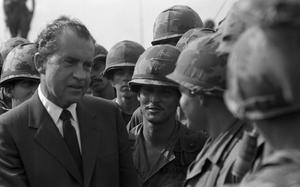 Nixon struggles to achieve ‘peace with honor’ and end unpopular Vietnam War
Vietnam had been Lyndon Johnson’s war, and it destroyed his presidency. Richard Nixon entered the White House on Jan. 20, 1969, anxious to avoid Johnson’s fate. 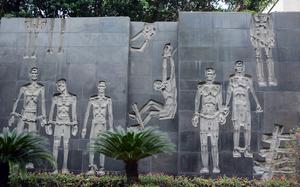 'The torture stopped': 1969 brought temporary changes to infamous Hanoi Hilton
American prisoners of war locked up for years in North Vietnam knew the drill. Bow to their captors or take a beating. But in October 1969, the rules changed.

Patriotism or protest? Army vet Jimi Hendrix had the 'most electrifying moment' at Woodstock

Documentarians peel back decades of pain in 'The Vietnam War'

US, Communists locked in a bloody stalemate, each looking for an edge

War stories: Vietnam War journalists share examples of courage
Vietnam-era war correspondents wore uniforms, ate field rations and shared many of the deprivations and dangers of ordinary fighting men. Five decades later, their ranks are thinning but those who remain are still telling stories about “the last good war” for combat journalists.

Love, protest, music and ‘madness’
1967 was a time of change and hard questions, a coming of age for a generation with bipolar views about the war.

Charlie Company, 1967: an unlikely friendship
From massive moments of traditional warfare like Operation Junction City, to battles in defense of exposed and vulnerable Marine bases along the Demilitarized Zone like Con Thien, to stealthy long-range reconnaissance patrols – American forces across the length and breadth of South Vietnam sought to bring overwhelming firepower to bear on their North Vietnamese and Viet Cong foes.

Vietnam and Hollywood: The realism quotient
As far as authenticity is concerned, Hollywood’s Vietnam War films have run the gamut from uncannily realistic to cartoonishly foolish.

The sparks that kindled the flames of war
Viewed through the prism of time, the years after World War II can seem like an idyllic era, with U.S. power supreme, the middle class thriving and families living stable “Ozzie and Harriet” lives after decades of war and economic depression.

High school with highest death rate in Vietnam embraces its legacy
It took 50 years for Louis Viscusi to overcome the mental obstacles that kept him from the blighted neighborhood in North Philadelphia that he always meant to visit.

Vietnam at 50: 1966
It was the year of the reality check. In 1966, Americans began to grasp what they faced in Vietnam. Back home the U.S. administration struggled to sell the war as a necessary sacrifice to stop global communism and save a backward people from an evil aggressor seeking to enslave them.

John Astle and Roger Hunt: Friends survived combat as CH-46 pilots
John “Ace” Astle, 73: Enlisted in the Marine Corps Reserves out of high school, Marshall University in West Virginia and Platoon Leaders Course, 1962-66, Navy Flight School in Pensacola, Fla., 1967-68. Flew CH-46 helicopter in Vietnam 1968-69, served as a pilot on Marine One, retired from the Marine Corps as a colonel after 30 years. Spent several years as a police pilot, and since 1982, has been an elected official in the Maryland legislature – first in the House, then in the Senate.
More Vietnam Stories news