The sparks that kindled the flames of war 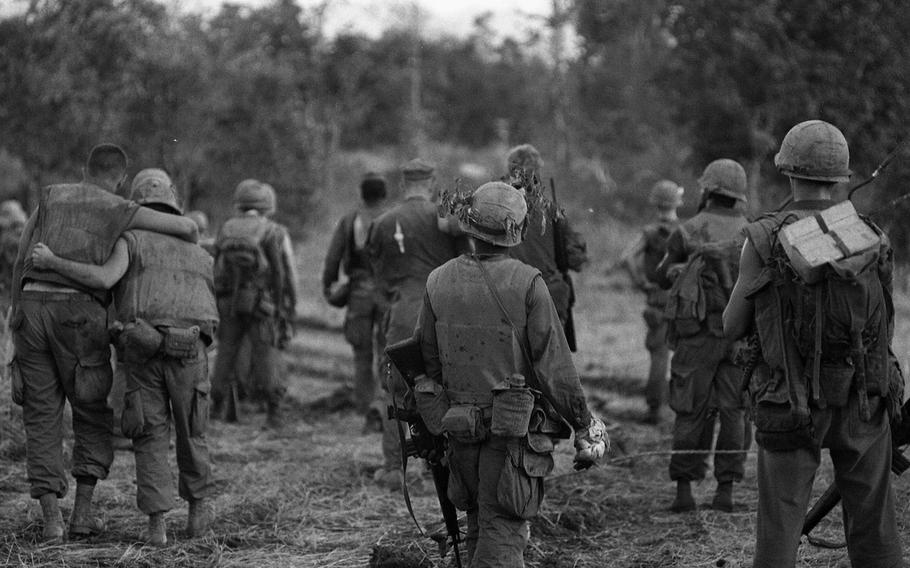 Buy Photo
The Marines launched another phase of Operation Prairie IV on May 13, 1967. On May 16, Company A of the 1st Battalion, 9th Marine Regiment moved out on a platoon-sized sweep, supported by tanks. After fighting back the NVA, wounded Marines — supported by their battle buddies — march to the command post. Some men were blinded in the ambush and had to be carried. The regiment became the legendary “Walking Dead.” (Tom Dreiling/Stars and Stripes)

WASHINGTON — Viewed through the prism of time, the years after World War II can seem like an idyllic era, with U.S. power supreme, the middle class thriving and families living stable “Ozzie and Harriet” lives after decades of war and economic depression.

In reality, those years were also a time of legal racial discrimination, marginalization of women and an ever-present fear of nuclear annihilation at the hands of the Soviet Union.

Pressure to display national unity in face of “world Communism” produced crushing social conformity on issues from the length of boys’ hair and girls’ skirts to America’s role in the world.

Behind the image of stability, American society was simmering. The Vietnam War would bring it to a boil.

The African-American struggle for equal rights accelerated after the Supreme Court in 1954 declared school segregation unconstitutional. Every passing year brought more protests — and more violence throughout the South and the big cities of the North.

In the broader society, avant-garde poets and writers of the Beat Generation promoted ideas and lifestyles that by 1967 morphed into the hippy counterculture.

At the same time, brushes with nuclear war in Berlin in 1961 and the Cuban Missile Crisis a year later prompted many Americans to question whether U.S. foreign policy was too important to be left to the generals and their hardline Ivy League elite allies.

Many Americans wondered whether the 1963 assassination of President John F. Kennedy was blowback from secret CIA campaign against leftist regimes in Cuba and elsewhere in the developing world.

By the mid-1960s, opposition strands began to come together. In 1962, white university student activists issued a manifesto, the Port Huron Statement, condemning what they considered the failures of American democracy — including pervasive racism.

How could America claim moral superiority in the struggle against Communism, they asked, when it deprived millions of citizens of their rightful place in a society that preached that “All men are created equal”?

“The American political system is not the democratic model of which its glorifiers speak. In actuality it frustrates democracy by confusing the individual citizen, paralyzing policy discussion, and consolidating the irresponsible power of military and business interests,” the statement said.

At the time, those words were repugnant to millions of Americans, who saw the students as pampered, unpatriotic, or at worst agents of the Soviet Union. With different words, however, figures on the political right were also warning that America’s democratic experiment was heading off the rails.

Republican Sen. Barry Goldwater, who was defeated for the presidency by Lyndon Johnson in 1964, said Americans were losing control of their lives to “to the bureaucrat” in distant Washington and elites of “the distant (government) agency” — words that resonate today.

The Vietnam War brought all these issues into sharp relief. As more young Americans died, more and more Americans were asking difficult questions.

Was the war necessary to stop the spread of Communism or a terrible mistake by the foreign policy, business and political elites?

Why were poor blacks and whites being sent to fight the war while the sons of the elite laid low in college protected by student deferments? Was it fair to send African-Americans to defend democracy in faraway Vietnam when they were denied their rights at home?

The issues were incendiary. All they needed was a spark that was to come.