The violence has waned, but the fear remains 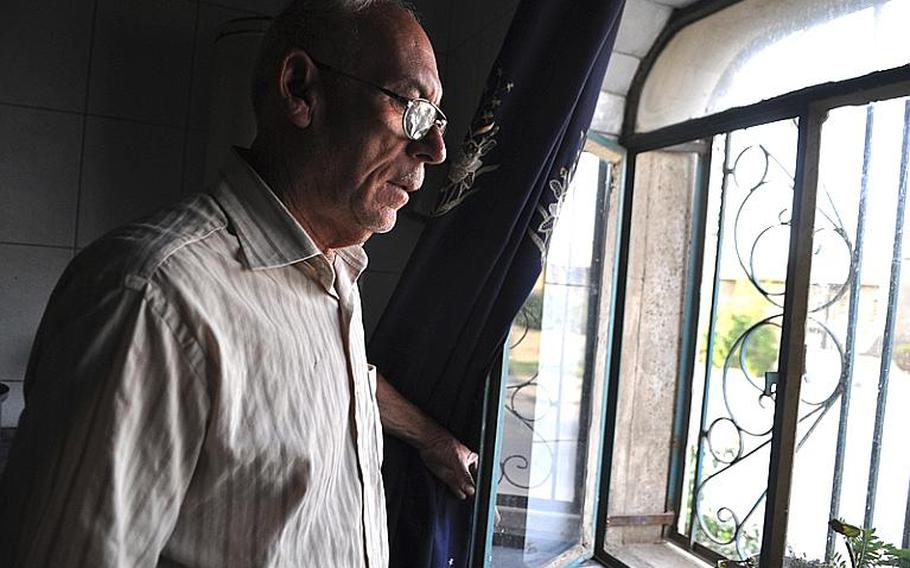 "Omar," a Sunni living in the heavily Shiite Baghdad neighborhood of Akhari, peeks out his apartment window to the street where he saw many of his neighbors marched away for execution during Iraq&#39;s sectarian civil war. "Omar," who did not want to use his real name for fear of retribution, was kidnapped by Shiite gunmen and still lives in fear. (Heath Druzin/Stars and Stripes)

BAGHDAD &mdash; On a stifling summer day, Omar, a 66-year-old retired police officer, peeks out a dingy window from the dark apartment that has become his prison.

Outside, the garbage-strewn streets of the Akhari neighborhood are patrolled by SUVs with tinted windows, the favored ride of the Mahdi Army, a Shiite militia whose members once bundled Omar, a Sunni, into the trunk of a car and beat him so savagely he was blinded in one eye.

From this apartment, Omar watched Mahdi Army militiamen march worshippers from a nearby Sunni mosque to be executed.

&ldquo;Every night, when I go to sleep, I remember what happened to me,&rdquo; Omar said. &ldquo;I can&rsquo;t be a normal man and enjoy myself &hellip; I wish I had died before witnessing that.&rdquo;

Omar believes he and his family are the only Sunnis on the block who survived. He asked to be identified by a pseudonym because he fears for his safety.

Violence in Akhari has waned significantly in the last two years, as it has across most of Iraq. But the fear, anger and mistrust felt by Omar and countless other Iraqis who find themselves stranded in the &ldquo;wrong&rdquo; neighborhoods is not so easily vanquished.

As the last American combat troops left Iraq on Thursday, the fractured nation is grappling with the consequences of a sectarian civil war unleashed after the U.S. invasion and the fall of Saddam Hussein.

Many Iraqis fled their homes in the middle of the night, returning to find squatters had taken over. Even hospitals became battlegrounds, and in some neighborhoods families were too frightened to pick up their loved ones&rsquo; bodies from the morgue.

Violence started to drop in 2008, as the U.S. paid off former Sunni militants to turn against al-Qaida and sent additional troops to Iraq&rsquo;s hot spots. But many Iraqis have not returned to their homes and much of the capital appears to be permanently divided by religion.

Meanwhile, sectarianism has become entrenched in politics, where the same leaders who make glowing speeches about Iraqi unity run in parties defined by their religious affiliation. Some have armed wings that stand accused of some of the civil war&rsquo;s worst atrocities.

Cautious Iraqis don&rsquo;t speak of an end of the civil war, but rather a halt. They worry that another round of bloodshed could erupt after U.S. troops leave, or even before.

Like many Baghdad neighborhoods, Akhari was a place without a strong religious identity before the war in Iraq. Old men, regardless of religion or ethnicity, would set up chairs and tables outside in the evening to drink tea and play dominoes. Residents often didn&rsquo;t know their neighbors&rsquo; religious affiliations. They never thought to ask.

After the fall of Saddam and the initial hope that Omar shared with many Iraqis, signs of growing religious separatism began to appear in his neighborhood. His neighbors adorned their houses with flags bearing the likeness of Ali Hussein, a martyr revered by Shiites, and Shiite imams began denouncing their Sunni counterparts from minaret loudspeakers. Women on his block, once comfortable in Western clothes, started covering up in black abayas.

The shooting started soon after insurgents bombed the golden dome of the al-Askari Mosque, a revered Shiite holy site in Samarra. SUVs blocked off both sides of Omar&rsquo;s street and masked gunmen began firing at buildings where Sunnis lived. As bullets shattered his windows and his terrified family cowered inside, Omar said he ran into the street, hoping to distract the gunmen and keep his family safe.

He was blindfolded, bound and bundled into the trunk of a car.

After a long, winding drive, the car stopped and Omar said he was dragged into a building, where his captors kicked him in the head until he could no longer see out of one eye.

They left him lying on the ground, he said, while he heard gunshots and screams that he assumed came from Sunnis being executed.

He prayed and waited his turn.

A militia member took pity on him and spirited him out of the detention center in the middle of the night, freeing him in a neighborhood close to his home, Omar said. He stumbled through the darkness until someone offered to let him call his family to pick him up. They had fled to a relative&rsquo;s house in a mostly Sunni neighborhood.

After two weeks, Omar mustered the courage to return to his home in Akhari to see what was left.

&ldquo;When I went back, there was another family living there,&rdquo; he said. &ldquo;They were even eating our food.&rdquo;

The Office of the United Nations High Commissioner for Refugees estimates that more than 1.5 million Iraqis were displaced within the country &mdash; that is, they fled their homes, but did not leave Iraq.

Some, like Omar, have returned, but an estimated 500,000 are living in teeming squatter camps. The camps are often filthy, overrun with wild dogs, lacking electricity or running water and fouled by raw sewage coursing through rutted dirt roads.

Outbreaks of violence make providing aid to these internal refugees difficult. And with U.S. troops pulling out, the situation is likely to get even trickier, said Andrew Harper, head of the Iraq Support Unit of the United Nations refugee agency.

Without help, Harper said, the desperate plight of the refugees leaves them vulnerable to insurgent recruiting.

&ldquo;We have to figure out how to provide them with a future,&rdquo; Harper said. &ldquo;No one can afford to have these camps remain places of destitution and targets for extremists.&rdquo;

Yet the response from Iraqi leaders has been tepid, and the government is downplaying the internal refugee crisis Iraq now faces.

That leaves only 15 percent who wish to return to their neighborhoods and haven&rsquo;t, and Sultan attributes that to families overestimating the danger of coming back.

&ldquo;It is a small problem,&rdquo; he said.

But displaced Iraqis tell a different story. Some say they were sold out by their neighbors, and many of the neighborhoods torn apart by sectarian fighting still crawl with militia members.

After finding the squatters in his home and being warned by a Shiite neighbor not to return, Omar and his wife fled to Syria, where they were granted refugee status.

For eight months, they lived in Damascus, surviving on a meager United Nations handout of $100 per month. When Omar briefly returned to Baghdad to collect his police pension, he was stripped of his refugee status and kicked out of Syria. With nothing more than his modest pension, he couldn&rsquo;t afford any place other than his old apartment, which he was able to take back with the assistance of the government ministry in charge of displaced Iraqis.

It was a joyless homecoming.

Omar is a deeply religious man and used to visit his neighborhood mosque daily. Now he prays at home. His mosque was set ablaze during the civil war, taken over by Shiite clerics.

Once a middle-class neighborhood, Akhari is now dominated by dilapidated, bullet-pocked buildings. Billboards feature the scowling face of Muqtada al-Sadr, a radical Shiite cleric to whom the Mahdi Army is loyal and who many hold responsible for much of the ethnic violence during Iraq&rsquo;s civil war.

Pointing at the countless bullet holes in his building, Omar shakes his head sadly. He is desperate to leave again, this time for good.