She survived the Tulsa Race Massacre. Now, at 107, she's become a queen mother. 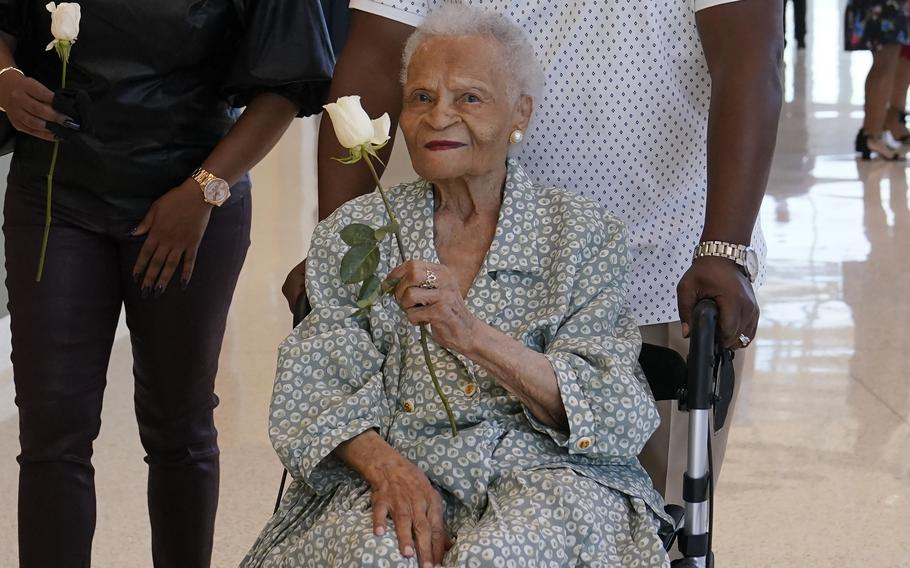 Viola Fletcher, the oldest living survivor of the Tulsa race massacre, holds a rose she received as she arrives for a luncheon honoring survivors on May 29, 2021, in Tulsa, Okla. According to reports on Saturday, Sept. 4, Fletcher and her brother Hughes Van Ellis were invited to Ghana where they were greeted by royalty. (Sue Ogrocki/AP)

So Viola Fletcher, who is 107, and her brother, Hughes Van Ellis, who is 100, boarded a plane in August and flew 6,300 miles from Oklahoma to Ghana.

It isn't just their ages and the distance they traveled that made the trip remarkable. It's who they are: two of the three oldest known survivors of the 1921 Tulsa Race Massacre who are still alive.

They'd been invited to Ghana to be recognized for what they endured a century ago and to celebrate the African roots of their resilience.

The siblings were greeted by royalty and met with the nation's president, Nana Akufo-Addo, who granted them Ghanaian citizenship and gave Fletcher a plot of land in the capital city, Accra.

"Medaase," Fletcher said, using a Ghanaian dialect for "thank you," during a meeting with the president, "We accept it with great joy, and we thank the president for this great honor."

Several ceremonies yielded a bounty of honors: At one, she was crowned a queen mother. In another, dressed in white, she received a new name, "Naa Lamiley," which in another Ghanaian dialect means, "Somebody who is strong. Somebody who stands the test of time."

She received a red, bejeweled crown displaying another of her new names, "Ebube Ndi Igbo." From the Ga Kingdom in Ghana, she received the name "Naa Yaoteley" Fletcher, which means "the first female child in a family or bloodline."

Ellis, also known as "Uncle Redd," received honors of his own. He was made a chief and presented by the Palace of Eze Ndi Igbo Ghana with the new name of "Ike Ohe Ndi Igbo," meaning "Strength of the Igbo." Ellis also received the name "Nii Lante," by the Osu Traditional Council, meaning "Loves helping other people because he has a kind heart."

Ghana's president has invited African descendants in the diaspora to Ghana to mark the "Year of Return," which commemorated 400 years since the first Africans arrived in the colony now known as Virginia. "This country is your country, and anyone who wants to come to reestablish, connect with us here, is welcome," Akufo-Addo said. "We are all part and parcel of this great African family, and the sooner all of us recognize it and work toward the strength of this family, the better for each one of us."

Akufo-Addo recognized the resilience of Fletcher and Ellis, who survived the Tulsa Race Massacre, one of the worst incidents of racial terror committed against Black people in America.

"They lived to tell the story," Akufo-Addo told reporters.

Fletcher called the trip a journey of a lifetime. "It was wonderful," she said. "Seems like they knew us. If I was younger, I would go back."

Ellis described it as "going back home. The peace and the quiet. It was overwhelming. I felt like a king. It made me so proud to be there."

The other known living massacre survivor, Lessie Benningfield Randle, 106, decided not to make the trip to Africa. Her wish is to go to see a Broadway show in New York.

The trip entitled "Coming Home: The Journey of a Lifetime," was co-sponsored by the nonprofit Our Black Truth, a Virginia-based social media platform, and the Diaspora African Forum, an African Union-sanctioned embassy in Accra established to create a bridge between the global African diaspora and their native lands. It was organized with the help of Ambassador Erieka Bennett, who is the chief of mission at the embassy, and Our Black Truth's Toni Luck.

Fletcher and Ellis boarded a plane in mid-August, more than two months after the country marked the 100th anniversary of the Tulsa Race Massacre and three months after the siblings testified on Capitol Hill, calling for justice and reparations for survivors of the massacre and their descendants.

They were children when a White mob descended on the all-Black neighborhood of Greenwood on May 31, 1921, destroying one of the country's most prosperous African American communities. Historians say that, by the time the massacre ended the following day, as many as 300 Black people were killed and 10,000 were left homeless.

"They used to speak of Greenwood as 'Little Africa,'" said Oklahoma state Rep. Regina Goodwin, D-Tulsa, whose district includes Greenwood. "Some White folks thought they were being disparaging when they called Greenwood 'Little Africa.' Yet, that was a great compliment. Africa is the cradle of civilization and a continent of intellect and soul. There is a connection. These survivors were able to see Africa."

Goodwin, who helped raise donations for the survivors, introduced Fletcher and Ellis to Randle during an April 27 meeting. It was at that meeting when Fletcher said she wanted to travel to Africa.

"Mrs. Fletcher kept saying, 'I want to see Africa,'" Goodwin said. "It's one thing to say it. It's a blessing they were able to speak the trip into existence, see Africa and return home safely. Absolutely remarkable at 107 and 100 years old, they were fearless. They were determined."

In the weeks following the commemoration events in Tulsa, Our Black Truth, which was founded by brothers Michael Thompson and Eric Thompson, offered them, their children and grandchildren an all-expenses paid trip to Ghana.

The survivors attended more than 19 events during eight days, according to Tony Regusters, international spokesperson for Our Black Truth. They met with Ghanaian tribal chiefs and placed the names of deceased family members on the Sankofa Wall. The wall is a memorial, which is inscribed with the names of hundreds of people from the African diaspora, at the Diaspora African Forum on the campus of the W.E.B. DuBois Cultural Center. They visited the dungeon at Osu Castle, which is part of a 17th-century UNESCO World Heritage Site on the coast of Ghana, where thousands of Africans were held captive before boarding ships and forcibly transported in the "Ma'afa" of the trans-Atlantic slave trade.

At Kotoka International Airport in Accra, they were greeted with the word, "Akwaaba," which means "welcome" in Fante, a language spoken in Ghana. Major television networks in Ghana waited to interview them.

"I was so proud to see my people waiting for me," Ellis said.

Nadia Adongo Musah, an official with Ghana's department of Diaspora Affairs, called the visit by Fletcher and Ellis, "one of the biggest historic" events in which "Africans in the diaspora have come back to us."

Throughout the trip, they rode in a presidential motorcade, with a police escort. When they arrived at the La Palm Royal Beach Hotel, which sat on the Atlantic coast of Ghana, drummers, singers and dancers greeted them. That night, they had dinner on the beach while listening to crashing waves of the ocean, along the same shores from which many African ancestors were taken.

"We had a chance to decompress," said Fletcher's grandson Ike Howard, "and think, 'Wow, we actually made it to Africa, to Ghana."