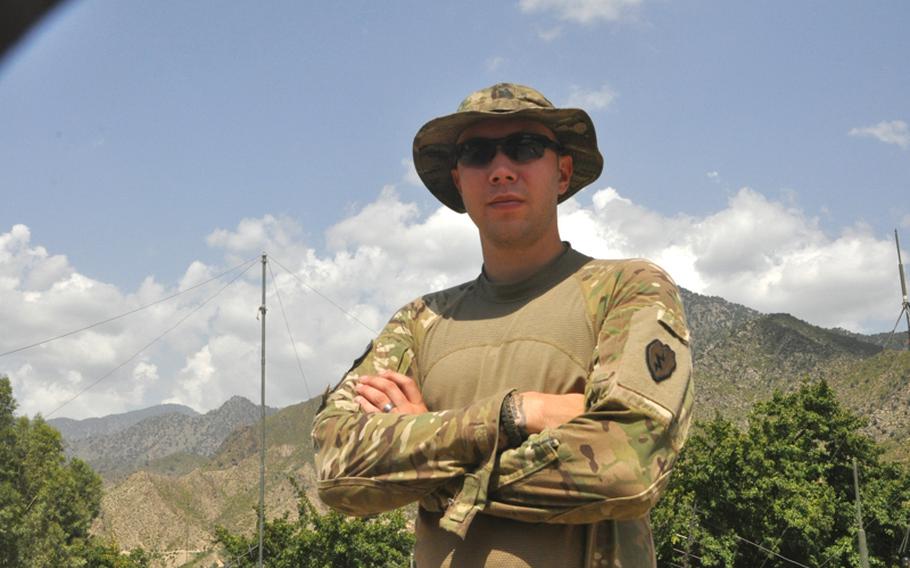 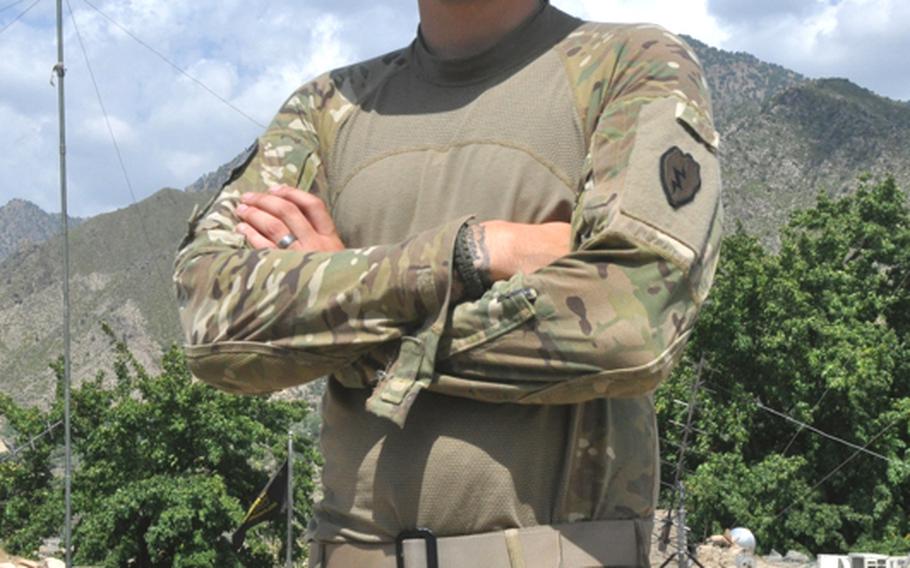 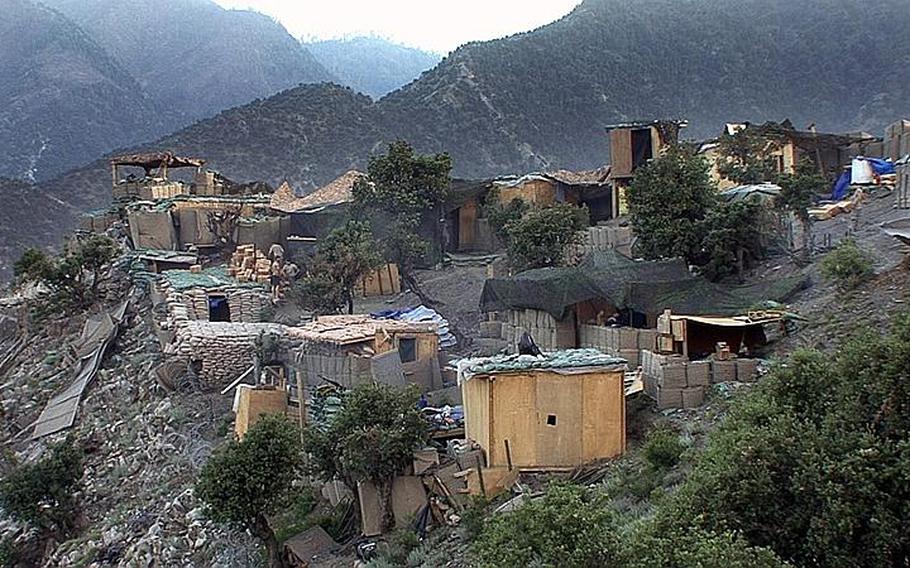 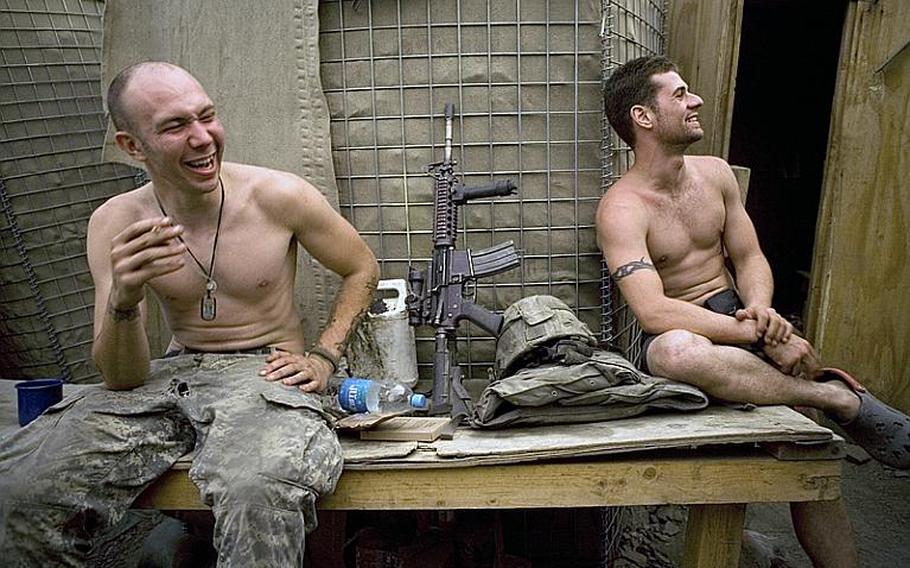 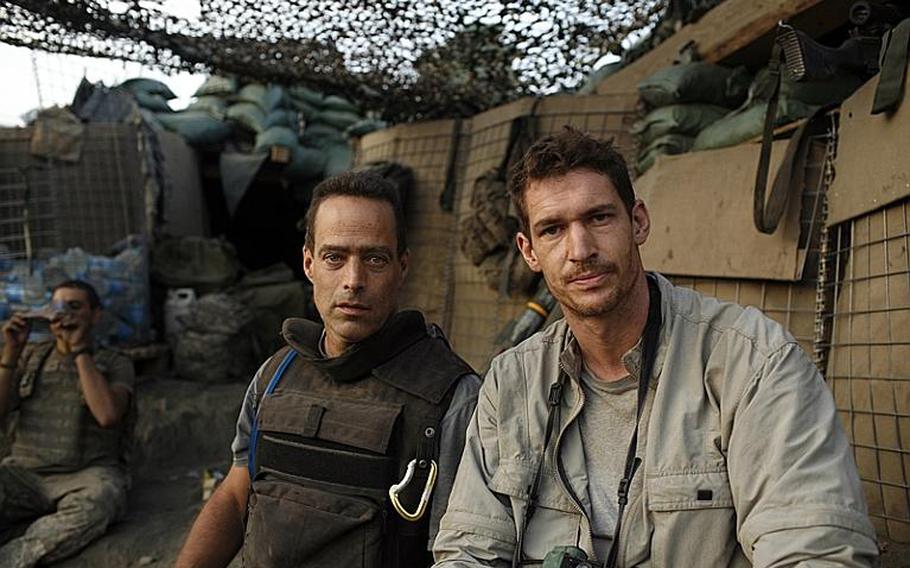 ASMAR, Afghanistan -- Sebastian Junger&rsquo;s best-selling book &ldquo;War&rdquo; reconstructs in visceral detail a day in 2007 when Taliban insurgents ambushed a U.S. platoon in the Korengal Valley of eastern Afghanistan. In one scene, then-Pvt. Misha Pemble-Belkin runs through sheets of gunfire to aid Spc. Carl Vandenberge, who is bleeding out after a bullet has severed the brachial artery in his left arm.

&ldquo;You could see it in his face that he&rsquo;s slowly dying,&rdquo; Pemble-Belkin said.

Pemble-Belkin&rsquo;s actions saved Vandenberge&rsquo;s life. More than once during the platoon's 15-month tour in Kunar province, however, death poached his comrades.

The first was Pfc. Juan Restrepo, 20. His surname supplied the title of last year&rsquo;s Oscar-nominated documentary, co-directed by Junger, that parallels &ldquo;War&rdquo; in recounting the unit&rsquo;s Sisyphean slog up and down the walls of the Korengal.

&ldquo;Restrepo&rdquo; balances footage of firefights and post-deployment interviews with the soldiers, who named an observation post for their fallen friend, a medic. Describing the privations of war, Pemble-Belkin, his sleepy brown eyes holding steady on the camera and his voice a gentle whir, emerges as the film&rsquo;s conscience.

Audiences might have assumed he forever exiled himself from Afghanistan&rsquo;s untamed borderlands after his tour ended in 2008. Instead, as one year away turned into a second, time pried open his desire to return.

&ldquo;I wanted to come back to Kunar,&rdquo; he said as the last orange embers in the July evening sky darkened above Combat Outpost Monti in Asmar. &ldquo;I know the terrain, I know how the enemy fights, I know how to react to them. I know how to survive.&rdquo;

Asmar huddles beside the Kunar River less than 10 miles from Pakistan in a narrow valley trapped by the Hindu Kush mountains. Granite peaks topping 6,000 feet surround the base like enormous shark fins.

Pemble-Belkin, 25, arrived here in April as a sergeant and team leader with the 3rd Brigade Combat Team of the 25th Infantry Division. His rank and role have changed since he left the Korengal, 30 miles to the southwest, as a private and radio operator with 2nd Battalion, 503rd Infantry Regiment of the 173rd Airborne Brigade.

At 6-foot-1, with scythe-long arms and a shaved, marble-round head, Pemble-Belkin appears taller in person than on-screen, and his scarecrow frame of three years ago has thickened with muscle across his chest and shoulders.

Likewise, from his perspective, the country to which he deployed again looks different.

&ldquo;It feels like the war is being won,&rdquo; he said. &ldquo;All they show on the news back home are people dying. Yes, people are still dying, but at the same time, the fighting has died down.&rdquo;

His belief that progress has occurred helps explain his support for the ongoing withdrawal of U.S. troops from Afghanistan. As he put it, &ldquo;I think this country is ready to deal with its own [expletive].&rdquo;

His reaction to the Army's exit from the Korengal last year hews to a similar logic.

"Some guys were upset about it; I wasn't," Pemble-Belkin said. "We could have lost more guys there if we didn't pull out."

The amount and intensity of combat his unit endured over 15 months in the Korengal might be unequaled in the annals of the Afghanistan war.

Three years later, while enemy contact in the Kunar River Valley is less sustained by comparison, the Taliban-led insurgency continues to roil the province. More than 10 soldiers in Pemble-Belkin&rsquo;s Company B platoon have been wounded over the first third of its tour, though none on his team.

&ldquo;It isn&rsquo;t like it was last time with firefights &mdash; the attacks here are usually from farther out,&rdquo; he said. &ldquo;But there are a lot of mortars and rockets, so you&rsquo;ve got to be ready.&rdquo;

No small number of troops in Kunar and across eastern Afghanistan revere &ldquo;Restrepo&rdquo; and &ldquo;War&rdquo; as totems of their own experience. Pemble-Belkin&rsquo;s team has learned the benefits of being led by a man who appeared in the film and book.

&ldquo;He can tell you exactly what to expect before a mission because he knows this area so well,&rdquo; said Spc. Steven Schwigert, 24, of Detroit. &ldquo;He&rsquo;s always teaching us something &mdash; about the terrain, how (insurgents) maneuver.&rdquo;

Schwigert and Pfc. Kevin Amick first met Pemble-Belkin last year at Schofield Barracks in Hawaii, the company&rsquo;s U.S. base. &ldquo;I was like, &lsquo;Hey, is that the guy from &lsquo;Restrepo?&rsquo;&thinsp;&rdquo; said Amick, 21, of Baltimore.

&ldquo;I didn&rsquo;t know what to expect, but he&rsquo;s the same as in the movie &mdash; cool, calm and collected,&rdquo; Amick added. &ldquo;Even when we&rsquo;re getting shot at, he doesn&rsquo;t flip out.&rdquo;

Those attributes were manifest to Junger during the eight months he spent reporting and filming in Kunar.

&ldquo;He was very calm, competent and never complained,&rdquo; Junger said in an email. &ldquo;He is completely un-macho but also very brave and a very good soldier. Other soldiers like him for the same reasons that civilians do.&rdquo;

After his first tour, Pemble-Belkin went home to Hillsboro, Ore., outside Portland, where his parents moved from Detroit when he was a toddler.

He had re-enlisted in Afghanistan and planned to stay with his friends in the 173rd Airborne. But with about half the unit leaving the Army after the punishing hitch in Kunar, he moved to Fort Polk, La., to join the 509th Airborne to train soldiers heading to Afghanistan.

In spring 2009, he packed a duffel bag and rode his motorcycle 2,400 miles from Oregon to Louisiana. He shivered through the Sierra Nevada in Northern California before thawing in the neon oasis of Las Vegas, then burned across the high desert of Arizona and New Mexico and the scrubland of Texas. The country&rsquo;s vastness offered an antidote to the captivity of the Korengal.

&ldquo;We had limited computer access, we had limited telephone access,&rdquo; Pemble-Belkin said. &ldquo;You got to the point where you thought the valley was the only thing in the world.&rdquo;

In a sense, he hauled that rugged, restive gulch with him to Fort Polk, playing the part of Taliban insurgent while leading training exercises. After more than a year of simulating scenarios of a war in which he had fought, he craved a second tour.

&ldquo;I got tired of seeing units come through and then deploying. I felt like I wasn&rsquo;t doing anything anymore,&rdquo; he said. &ldquo;I&rsquo;d rather be back here, where the fight is, instead of sitting back there.&rdquo;

Pemble-Belkin received permission to join a company deploying to Kunar. He wound up with the 25th Infantry Division in Hawaii early last year, not long after &ldquo;Restrepo&rdquo; won the best documentary award at the Sundance Film Festival.

As buzz for the movie amplified, he attended promotional screenings with co-directors Junger and Tim Hetherington. Sharing his experiences with audiences proved cathartic.

Memories of friends claimed by the Korengal had trailed him home, triggering sporadic &ldquo;night terrors&rdquo; that jarred him awake. On other occasions, his wife, Amanda DeVos, found him sleeping under a makeshift fighting position he built from furniture and blankets in the middle of the night.

&ldquo;Seeing the movie and talking about it actually helped me,&rdquo; Pemble-Belkin said. &ldquo;It kind of gave me a chance to work through things.&rdquo;

If &ldquo;Restrepo&rdquo; has raised his visibility within the military, he passes mostly unrecognized through the civilian world &mdash; except in Hollywood, as he discovered in February when he accompanied Junger and Hetherington to the Oscars.

At the Vanity Fair after-party &mdash; &ldquo;Restrepo&rdquo; lost to &ldquo;Inside Job&rdquo; &mdash; the likes of Justin Timberlake, Josh Brolin and Kevin Spacey sought out Pemble-Belkin to discuss the film. Tom Hanks knifed through a crowd to reach him.

The two men had talked for several minutes when the actor remarked on the soldier&rsquo;s composure. &ldquo;You don&rsquo;t seem nervous at all,&rdquo; Hanks said.

&ldquo;Why would I be?&rdquo; Pemble-Belkin replied. &ldquo;You&rsquo;re just a person like me. I&rsquo;m about to deploy to Afghanistan two months from now. I&rsquo;m a little more nervous about that.&rdquo;

The thrill of walking the red carpet at the Oscars gave way to mourning only weeks later when Hetherington, a veteran war photojournalist, was killed while covering the revolution in Libya. &ldquo;It was shocking,&rdquo; Pemble-Belkin said. &ldquo;But the one thing you can say is that he died doing what he loved.&rdquo;

His decision to sign up for a second tour, as much as Hetherington&rsquo;s willingness to travel again and again to violent corners of the world, might baffle those unexposed to war. Junger, for one, is unsurprised.

&ldquo;I think he returned because he missed the urgency and sense of importance of being in a combat environment,&rdquo; said Junger, who remains in contact with Pemble-Belkin. &ldquo;I think you can miss those things and still have a &lsquo;sensitive&rsquo; side.&rdquo;

So the erstwhile private known to his platoon mates in the Korengal as Butters &mdash; short for Peanut Butter, a nickname derived from the initials of his last name &mdash; is back in Afghanistan as Sgt. Pemble-Belkin.

&ldquo;He provides confidence to his guys because he knows how to survive,&rdquo; said Capt. Michael Kolton, 28, of Fairfax Station, Va., who commands Company B out of Combat Outpost Monti. &ldquo;Not just physically, but emotionally, spiritually, mentally. I think he saves lives in that platoon.&rdquo;

Other soldiers sometimes tease Pemble-Belkin about his big-screen fame, calling him a &ldquo;war hero,&rdquo; a term strangers have used in earnest when they meet him. He resists the praise. For him, the legacy of &ldquo;Restrepo&rdquo; belongs to the soldier whose name inspired its title, his friend stolen by the Korengal.

&ldquo;What matters about the movie is that he&rsquo;ll never be forgotten,&rdquo; Pemble-Belkin said. &ldquo;I wish it could be that way for every single soldier who&rsquo;s been lost.&rdquo;

CorrectionThe 173rd Airborne Brigade was incorrectly identified in an earlier version of this article.