The Ketchum family lived together for six years on the MV Anastasis as they did relief work in Africa. The ship was docked in the port of Freeport, Sierra Leone, from 2003 to 2004. (Courtesy of Mercy Ships)

The Ketchum family lived together for six years on the MV Anastasis as they did relief work in Africa. The ship was docked in the port of Freeport, Sierra Leone, from 2003 to 2004. (Courtesy of Mercy Ships) 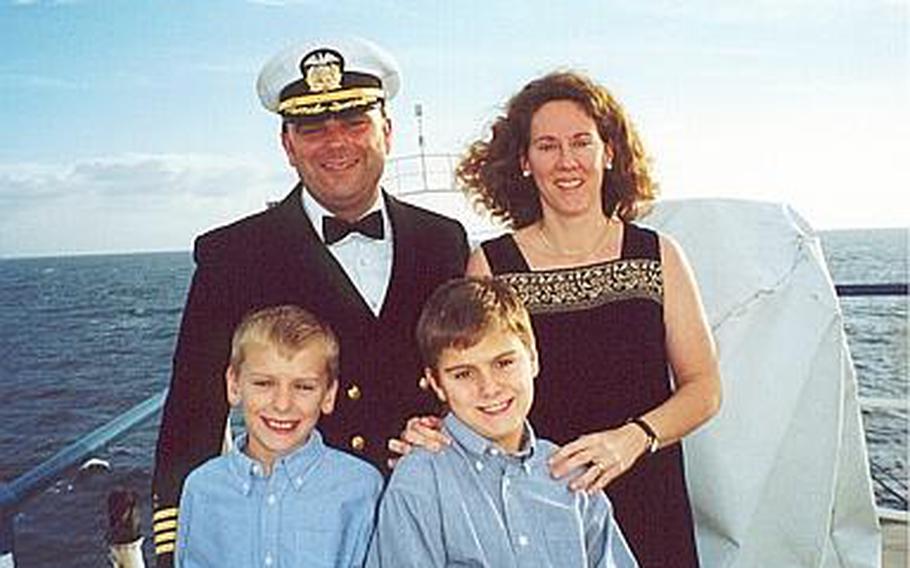 The entire Ketchum family, seen here at a formal event aboard the MV Anastasis in October 2001, is now on active duty in the U.S. military. Brothers Will and Benjamin Ketchum, front row, are now cadets at the U.S. Military Academy. Clement Ketchum, who was then the ship's captain, is now an active-duty Army lieutenant colonel, and Jennifer Ketchum is a Coast Guard commander on active duty in Liberia. (Courtesy of Clement Ketchum) Will Ketchum, a cadet in the class of 2014 at West Point. The entire Ketchum family is now serving on active duty in the U.S. military. () 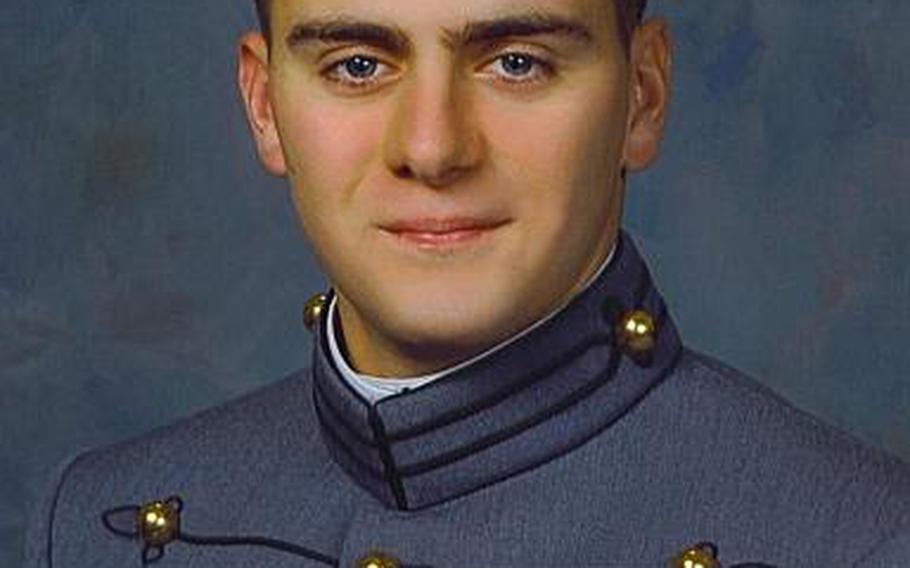 Benjamin Ketchum, a cadet in the class of 2013 at West Point. The entire Ketchum family is now serving on active duty in the U.S. military. (Courtesy of Clement Ketchum) 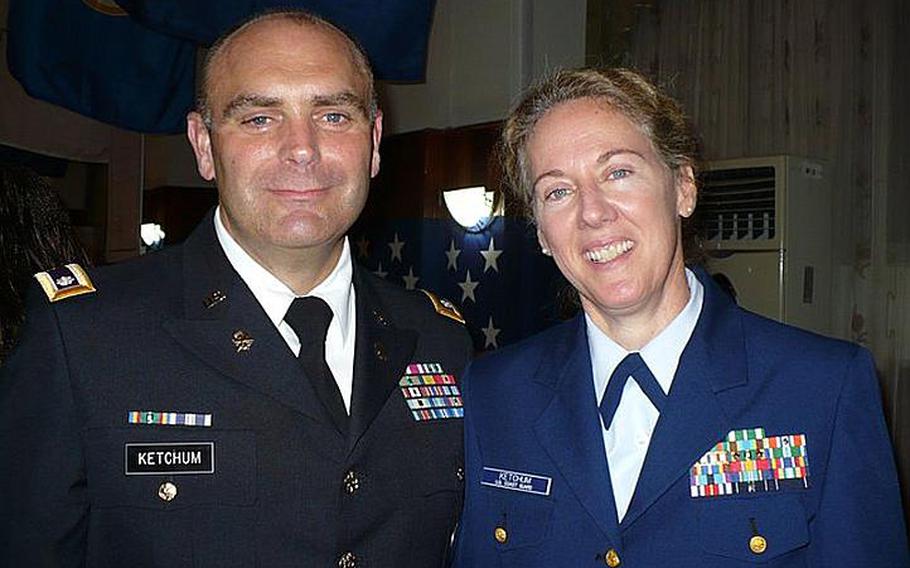 Army Lt. Col. Clement Ketchum and his wife, Coast Guard Cmdr. Jennifer Ketchum, are both serving on active duty in Liberia. With the entry of their two sons, Benjamin and Will, at West Point, the entire Ketchum family is now wearing the uniform of the U.S. military. (Courtesy of Clement Ketchum) The MV Anastasis, a 12,000-ton hospital ship operated by a Christian relief group called Mercy Ships, was loading supplies in Germany on Sept. 11, 2001, in preparation for a mission in Sierra Leone. The ship&rsquo;s captain, Clement Ketchum and his wife, Jennifer, were U.S. Coast Guard veterans who&rsquo;d been doing relief work in Africa for six years. Their two sons, Will and Benjamin, then 9 and 10, had basically grown up aboard.

Now, on the 10th anniversary of that tragic day, the entire Ketchum family &mdash; parents and both sons &mdash; are all in uniform in the U.S. military.

Jennifer Ketchum is a Coast Guard commander in Monrovia, Liberia, advising the new Liberian National Coast Guard. Clement is now an Army lieutenant colonel working as a foreign area officer specializing in Africa. Both Ketchum sons, Will and Benjamin, are cadets at West Point.

Were it not for 9/11, the Ketchums said, it&rsquo;s unlikely any of them would be wearing a uniform full-time. Along the way family members have served in Afghanistan, Sweden and the U.S., as well as in Africa.

In the weeks and months after 9/11, the U.S. Coast Guard started mobilizing reservists, and Jennifer Ketchum learned she would likely be called up. She decided to volunteer for an assignment she thought she&rsquo;d really enjoy &mdash; teaching as the Coast Guard&rsquo;s contribution to the faculty of a United Nations maritime school in Sweden.

The Ketchum family left the Anastasia after she landed the job.

The whole time, however, Jennifer said she could see her husband wanted to be involved himself.

&ldquo;He really wanted to go, wanted to contribute, but he was always looking to fit it in with where the family was now,&rdquo; she recalled. &ldquo;This was an intense desire to get into the fight and do something. He kept telling me, &lsquo;I just want to do something for the effort.&rsquo;&rdquo;

Although he&rsquo;d served 12 years in the Coast Guard and 13 in the Navy Reserve, Clement said the bottom line was that he felt like he had missed out.

&ldquo;Especially once the war started in Afghanistan and Iraq, and especially as my kids started getting older, I felt like I was born at the wrong time,&rdquo; he said. &ldquo;I felt like I had served and I had missed something that I really wanted to do.&rdquo;

As Jennifer&rsquo;s mobilization ended, the Ketchum family relocated once again to Florida in 2007, where Jennifer had a civilian job lined up. Almost simultaneously, Clement volunteered to be mobilized as a Navy Reserve officer in Afghanistan.

At age 46, he went on a six-week weight-loss program to get back into mobilization shape, but when he reached Afghanistan, the job he thought he&rsquo;d be doing &mdash; &ldquo;teaching logistics or something&rdquo; &mdash; wasn&rsquo;t really needed anymore.

&ldquo;But they needed civil affairs officers to support teams downrange,&rdquo; Clement said, and so he volunteered for that instead.

&ldquo;It was more of a combat role than I&rsquo;d expected, but given all the experience I&rsquo;d had on Mercy Ships, it was pretty similar. I didn&rsquo;t get IED&rsquo;d, but the vehicles in the convoy I was in did,&rdquo; Clement said.

In the meantime, the Ketchums&rsquo; kids had grown up. Their elder son, Benjamin, enlisted in the Coast Guard Reserve and was later accepted to West Point through the Soldier Admission Program &mdash; the first Coast Guardsman ever to be accepted into the program, academy officials said.

The bigger surprise was that the younger Ketchum son, Will, decided to apply as well.

&ldquo;He&rsquo;d always said, &lsquo;Yeah, the military is OK for you three, but I&rsquo;m not going to do it,&rsquo;&rdquo; Jennifer recalled. &ldquo;We took him to the older one&rsquo;s acceptance parade in August [2009]. He was hot and sweating and not having a good day. But when we got back to Miami, I saw him on the computer. &lsquo;What you doing?&rsquo; &lsquo;Nothing.&rsquo;&thinsp;&rdquo;

It turned out he was applying to West Point. Benjamin is a member of the academy&rsquo;s class of 2013; Will is in the class of 2014.

&ldquo;I really liked the campus. It was just a really nice place,&rdquo; Will said in an interview. &ldquo;But I was also into the mind-set. ... It seemed this was different from other colleges. Everyone is motivated here to do more than just party and get through.&rdquo;

Both Jennifer and Clement also had more chapters left in their military careers.

First, Clement decided he wanted to go back on active duty full-time. It was a long and involved process, but he applied and was accepted for an interservice transfer to the Army. As some of his friends from the Coast Guard Academy were retiring, he started a new role, as an Army foreign area officer in Liberia.

Independently, the Ketchums say, Jennifer learned about the chance to volunteer to be called up once again, and to help the government of Liberia to stand up its new national coast guard.

&ldquo;This is my dream job,&rdquo; Jennifer said. &ldquo;We got co-located without even trying.&rdquo;

&ldquo;Two independent services doing different processes coming to the same location,&rdquo; Clement said. &ldquo;I was perfectly fine doing an unaccompanied tour, and I think if we had tried it wouldn&rsquo;t have worked.&rdquo;

While it can be a challenge getting their family together given the four military careers and nearly 4,500 miles that separates the Ketchums, the parents say they&rsquo;re making it work. The family has a condominium in Falls Church, Va., that serves as home base.

&ldquo;Today, I look in the mirror and I&rsquo;m wearing a U.S. Army uniform and I&rsquo;m actually used to it,&rdquo; Clement said. &ldquo;I&rsquo;m getting ready for my 50th birthday, and its completely beyond anything I would have imagined 10 years ago. I&rsquo;m very happy.&rdquo;

&ldquo;It&rsquo;s really great,&rdquo; Jennifer said. &ldquo;I was home with the boys when they were home from West Point, and they were exchanging insignia. &lsquo;Hey, do you have another nape tape with the name &ldquo;Ketchum&rdquo; on it?&rsquo;&rdquo;

Jennifer said she&rsquo;s cognizant that while all four seem happy to have made military careers, it likely never would have happened if it weren&rsquo;t for the terrorist attacks.

&ldquo;For Clem, it was 9/11 directly. For me it was the same as well,&rdquo; she said. &ldquo;I think the boys saw our commitment, too, and said, &lsquo;Well, we&rsquo;d like to be a part of that as well.&rsquo; &hellip; The catalyst for action was 9/11.&rdquo;