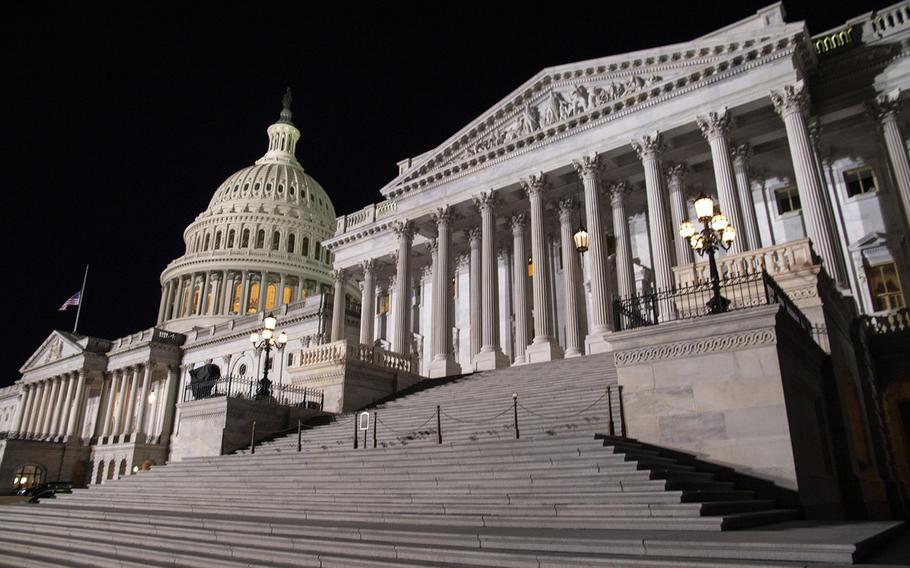 Buy Photo
The Senate side of the U.S. Capitol at night in December, 2018. (Stars and Stripes)

WASHINGTON — The Senate on Thursday approved a legislative provision to reaffirm the U.S. commitment to troops in Syria and Afghanistan, turning on President Donald Trump’s push to withdraw servicemembers from those countries.

The Senate voted 68 to 23 on an amendment proposed by Senate Majority Leader Mitch McConnell as part of the larger “Strengthening America’s Security in the Middle East Act” legislative package.

“I offered a straightforward amendment to allow for a straightforward debate about the Senate’s continued commitment to ongoing missions in Syria and Afghanistan,” McConnell, R-Ky., said from the Senate floor ahead of Thursday’s vote. “It is not a partisan amendment. It’s not complicated. There is no poison pill. Just an opportunity for senators to go on the record about what the United States should be doing in Syria and Afghanistan.”

The vote captures the widening gulf between Trump’s view of foreign policy and the upper chamber. It marks the second time that the Senate has turned on Trump’s efforts on the world stage in as many months.

Last month, the Senate voted overwhelmingly for legislation that would withdraw U.S. support in the war in Yemen. Senators reintroduced that legislation this week in hopes it could pass in the House this congressional session. Thursday’s legislation would also require consideration in the lower chamber.

“I continue to be seriously concerned that precipitously withdrawing U.S. troops from Syria and Afghanistan will deeply harm American interests and security,” Sen. Bob Menendez, D-N.J., said following Thursday’s vote and in advance of introducing his own measure. “The way in which the president announced his Syria withdrawal, with no plan, without consultation with Congress or our allies or consideration of the implications for our partners is not in our interests.”

Menendez said American troops on the ground are on the frontline fighting for our interests and also provide leverage to achieve diplomatic success.

Thursday also marks the most stark divide yet between the top Republican in the Senate and the president. McConnell said he had been clear about his views on troop withdrawals in Syria and Afghanistan, which comes weeks after Trump dismissed his former Defense Secretary Jim Mattis.

“I believe the threats remain. ISIS and al-Qaida have yet to be defeated. And American national security interests require continued commitment to our missions there,” McConnell said. “Today, the Senate will vote on this amendment. Members will go on the record for our allies and partners in the Middle East.”

Last month, Trump stunned Capitol Hill and the Pentagon with the announcement that the roughly 2,000 U.S. troops fighting the Islamic State in Syria would withdraw from the country within 30 days. Since the Dec. 19 pronouncement, then-Defense Secretary Jim Mattis has resigned, Republican and Democratic lawmakers have raised fierce concerns over the abrupt move and the administration has backtracked on its plans.

The day after Trump announced his withdrawal plans, Mattis issued a resignation letter signaling that he and Trump no longer agreed on military operations, including the president’s abrupt moves to drawdown troops in Syria and Afghanistan. Specific plans on a potential drawdown in Afghanistan remain to be seen. The Mattis resignation marked for perhaps the first time in American history the departure of a defense secretary in protest, adding to the overall unease that remains at the Pentagon.

Shanahan backed Trump’s decision earlier this week to withdraw troops from Syria and indicated he supported the potential for a drawdown of the roughly 14,000 U.S. troops in Afghanistan, calling ongoing diplomatic talks with the Taliban “encouraging.”

He told reporters that the U.S. military in Syria was in the early stages of the withdrawal process and he estimated ISIS would lose all of its Syrian territory in the next two weeks.

“We are on a deliberate, coordinated, disciplined withdrawal,” Shanahan said Tuesday in his first formal engagement with media as acting defense secretary. “The way I would probably characterize the military operations that we’ve conducted in Syria is -- that the risk of terrorism and mass migration has been significantly mitigated.”

Earlier Thursday, Sens. Tammy Duckworth, D-Ill., a combat pilot veteran, and Marsha Blackburn, R-Tenn., implored Trump not to abandon the Kurds in Syria. The new members of the Senate Armed Services Committee also wrote in a letter to Trump that abandoning allies and doing nothing to prevent their slaughter undermines the global effort to defeat ISIS and jeopardizes the country’s honor.

“Defending allies and partners is in our national interest. ISIS threatens global stability and nation-states throughout the world,” the senators wrote in a bipartisan letter. “If the United States is to avoid endless deployments of ground forces throughout the world, we must continually cultivate reliable partners in the region who are willing – and able – to effectively take the fight to our common enemy on the ground.”

The Strengthening America’s Security in the Middle East Act, or S.1, was introduced by Sen. Marco Rubio, R-Fla. The measure renews the U.S. commitment to Israel, deepens cooperation with Jordan, and delivers justice for the victims of President Bashar Assad’s regime in Syria, McConnell said Thursday.

“NATO has a proud history of delivering greater security to America and our allies and greater peace to the world. We stood shoulder-to-shoulder with our NATO allies throughout the Cold War. They stood with us following September 11th,” he said. “And NATO’s mission in Afghanistan today is an essential element of bringing peace and stability to that troubled country. NATO will continue to be critical to trans-Atlantic security, but it must adapt to face new challenges.”