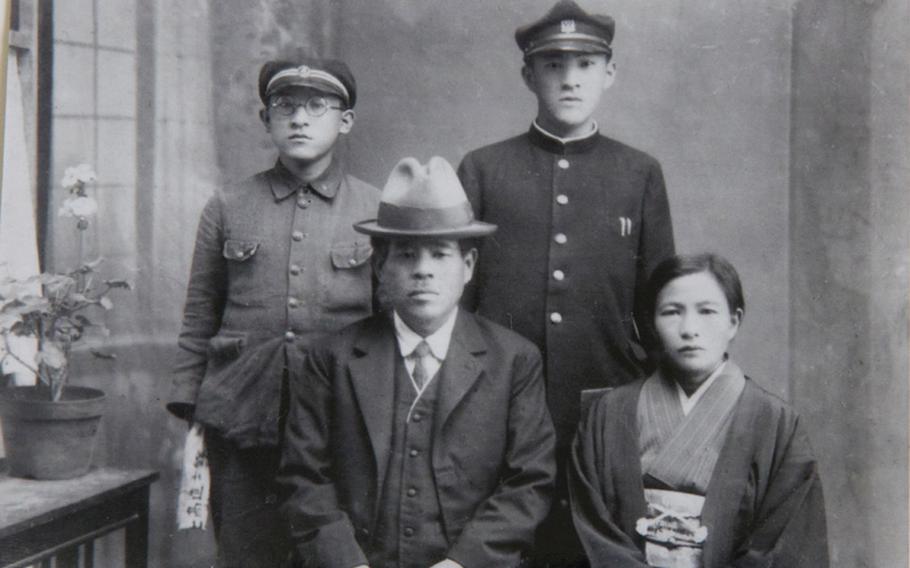 An image of a family photo of the Matsukawa family shows Tadash, rear right, in his university uniform. He was later conscripted into the Japanese navy and died during the battle of Iwo Jima. Beside him is his brother, Masaji, who received letters in 2007 found by U.S. sailor Vic Voegelin on the island in 1945. ()

An image of a family photo of the Matsukawa family shows Tadash, rear right, in his university uniform. He was later conscripted into the Japanese navy and died during the battle of Iwo Jima. Beside him is his brother, Masaji, who received letters in 2007 found by U.S. sailor Vic Voegelin on the island in 1945. () Naoko Tomioka, right, poses with Vic and Georgia Voegelin during one of her visits to the World War II veteran's home in upstate New York. (Courtesy of Naoko Tomioka) Buy Photo
Naoko Tomioka holds letters her uncle, Tadashi Matsukawa, wrote during the battle of Iwo Jima in 1945. The letters were found by U.S. sailor Vic Voegelin, and he kept them as souvenirs before returning them to Tomioka’s family in 2007. (Wyatt Olson/Stars and Stripes) 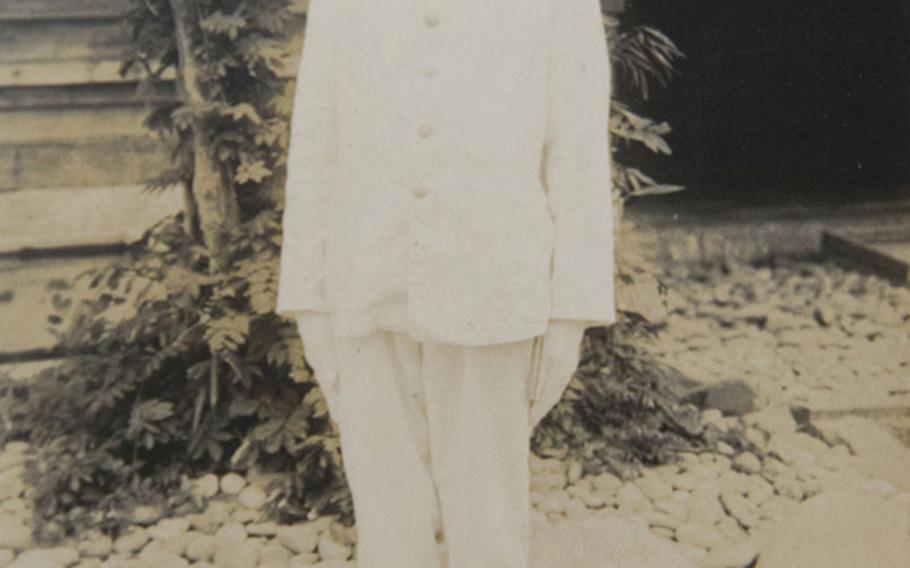 YOKOTA AIR BASE, Japan &mdash; Growing up, Naoko Tomioka had only a murky perception of her uncle. She knew he&rsquo;d died as a sailor in the Imperial Japanese Navy during World War II, which had ended 15 years before her birth. Little else was clear about the short life of Tadashi Matsukawa, her father&rsquo;s brother.

Tomioka&rsquo;s childhood curiosity about him was greeted with quiet muttering by her father and grandparents. &ldquo;I asked some questions about my uncle, but my grandmother said, &lsquo;no, you should shut your mouth,&rsquo;&thinsp;&rdquo; Tomioka recalled. Her elders held tight to the grief for their lost brother and son.

Then in 2007 &mdash; her grandparents long dead and her father, Masaji Matsukawa, dying of cancer &mdash; that shrouded past came alive for Tomioka, who was married and living just south of Tokyo with two teenage sons.

That&rsquo;s when her family received more than 100 letters that had belonged to her uncle on the day he died during the 36-day battle of Iwo Jima, which ended 67 years ago on March 26.

Now, five years after their return, the 108 postcard-size letters have brought Tomioka a deeper understanding of the grief that gripped her family and a profound sense of war&rsquo;s waste. The ages of her two sons parallel those of her father and uncle as they were caught up in World War II, a poignancy that led her to present the letters in talks to high school students in Japan and America.

Public interest in the letters has only continued to grow.

In December, Japan radio network NHK aired a dramatic adaptation of the letters. Last month, the network broadcast a documentary about them.

Talkative and energetic, Tomioka has organized the letters in photo albums, along with English translations she&rsquo;s written for many.

Almost all the letters were sent to Matsukawa during the half year he was training on the mainland for the inevitable battle of Iwo Jima.

With the help of U.S. and Japanese media, an octogenarian World War II veteran living in upstate New York had tracked down Tomioka&rsquo;s father and returned the letters.

Sixty-five years earlier, Vic Voegelin was a 19-year-old Navy machinist shuttling injured to hospital ships during the lengthy battle. He stumbled upon a stash of Japanese-language letters half buried in a shelled-out pillbox. He slung the satchel over his back as a souvenir.

Discharged in 1946, he returned home, quickly married and had five children. He shunted aside the memories of Iwo Jima, just as he packed away those letters in an old suitcase in his workshop.

Then in 2006, Voegelin saw Clint Eastwood&rsquo;s &ldquo;Letters from Iwo Jima.&rdquo; The film depicts the lives of the Japanese defenders in the months leading up to the battle, in particular a reluctant soldier who is ordered to burn letters from home belonging to fallen comrades. He buries them instead, and they&rsquo;re found decades later by archaeologists.

&ldquo;I thought, &lsquo;jeez, I&rsquo;ve got some real letters from Iwo Jima,&rsquo;&thinsp;&rdquo; Voegelin said. &ldquo;I got thinking, there&rsquo;s some family over in Japan, and these letters were for one of their loved ones.&rdquo;

He set about to return them.

In 1943, Matsukawa had been studying law at the prestigious Kyoto University when he was conscripted into the navy at age 20. His father, a high school principal, had been particularly devoted to this elder son; he wrote about half the letters found in the stash.

Most of the letters tried to reassure the young man that everything was fine at home, but food shortages were widespread during that point in mid-1944, by which time the Allies had pushed Japanese forces out of many territories previously captured.

Tomioka was surprised how the letter writers displayed no pessimism about the war.

&ldquo;Even during those days, the Japanese people thought that we would win,&rdquo; said Tomioka, who, after reading the letters, began pressing her parents about what they knew of the war and her uncle. Her mother told her the Japanese government&rsquo;s control of media was so complete that the public didn&rsquo;t know how bleak the outlook was.

The letters have softened Tomioka&rsquo;s opinion of her grandmother, who died in 1977 and had been emotionally cold. The woman Tomioka discovered in the postcards &ldquo;was a completely different person from the one I knew,&rdquo; she said. &ldquo;She was very warm-hearted. She loved two sons. The postcards had short sentences saying: &lsquo;mother&rsquo;s love.&rsquo;&thinsp;&rdquo;

She also learned why her father had become a ship inspector, a choice of work he wouldn&rsquo;t explain to her. In a letter to his brother in the spring of 1944, her father wrote that he had decided to attend Osaka University and study shipbuilding.

&ldquo;I expect that you will work on the warship that I plan to design and build in the future,&rdquo; he wrote. After the war ended, her father continued study in that field.

The letters included a few Matsukawa had written but not sent. One, to his former high school teacher, revealed the nationalist spirit that drove the Iwo Jima defenders. &ldquo;I am glad to hear of the kamikazes&rsquo; heroic attempts, and I commit myself to follow in their footsteps,&rdquo; he wrote.

After lengthy research, Tomioka found that her uncle shipped out to Iwo Jima on Jan. 29, 1945, about three weeks before the U.S. Marines stormed it. The fighting was protracted and ferocious, particularly because this was the first Allied landing on Japan&rsquo;s home islands.

About 6,800 Americans died during the battle, and only 1,083 Japanese survived out of a 20,000-man defense, according to the U.S. Navy Department Library.

In 1946, Tomioka&rsquo;s grandfather refused to accept a hand-delivered official notice of his son&rsquo;s death, the only information they would ever receive about him. Matsukawa&rsquo;s name was not added to the family gravestone.

&ldquo;After that, they never talked about it,&rdquo; she said. &ldquo;Maybe they believed my uncle was alive somewhere and would be back.&rdquo;

The family and national history she learned as a result of the letters inspired her to speak to high school students in Tokyo and New York. She urges them to think critically, to not passively accept what government officials say &mdash; particularly when it comes to using military force.

She developed a strong friendship with Voegelin, now a great-grandfather of six. She&rsquo;s visited his home near New Paltz, N.Y., several times.

He&rsquo;s heard Tomioka talk to students about her uncle&rsquo;s letters. The tale doesn&rsquo;t just resonate for him; his life is rooted in it.

&ldquo;She stressed the waste of war,&rdquo; he said. &ldquo;Talked about the life [her uncle] would have had if he&rsquo;d gone back to Japan, been as fortunate as I was to get back off that smoking pile of ash and come home and have the life I&rsquo;ve had, the children I&rsquo;ve had, and have them all turn out well and become good citizens.

&ldquo;That kid could have come home. He could have brought his own letters home.&rdquo;