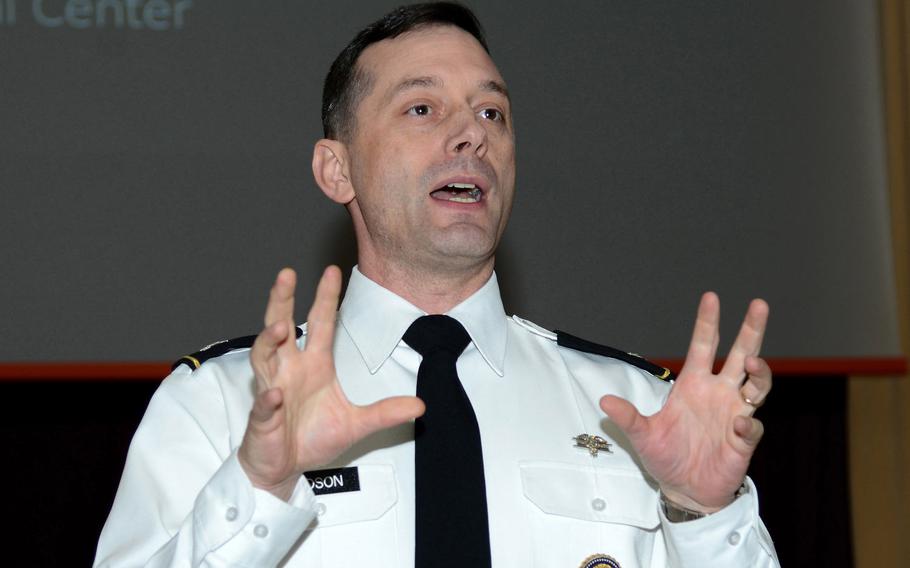 JUNE 15, 2018 UPDATE:Col. Timothy Hudson was reinstated after a three-month investigation determined that complaints against him of mismanagement and inappropriate behavior were unfounded.

KAISERSLAUTERN, Germany — The Army suspended the commander of Landstuhl Regional Medical Center on Tuesday, pending the outcome of an investigation.

Col. Timothy Hudson, who took command of the Army’s largest hospital in Europe in June, will be placed on other duties while the investigation is conducted, officials said.

Officials declined to comment on the nature of the investigation, other than to say that the issues did not involve patient safety or patient care.

The staff of the hospital was notified Tuesday morning of the decision.

“LRMC remains fully mission capable and will continue to provide safe and quality health care for our beneficiaries and mission command oversight of its six geographically-separated clinics,” LeMaster said.

Although it remains unknown whether the allegations are personal or professional in nature, some doctors have been critical of hospital management in recent months.

In February, civilian doctors at Landstuhl said they were moving ahead with an effort to unionize, citing low morale and compensation, as well as staff shortages, said Peter Winch, a representative with the American Federation of Government Employees in Washington.

Doctors who highlight problems risk not getting their contracts renewed, union organizers said.

“You feel like the leadership will retaliate and not extend your contract,” said one doctor, who requested anonymity for fear of reprisal.

Doctors who spoke with Stars and Stripes in February said that performance awards were being withheld or delayed for unknown reasons. The medical command disputed the comments, stating that compensation was comparable with the private sector and that bonuses were being paid.