Landstuhl doctors say they want to unionize in bid for more staff, compensation 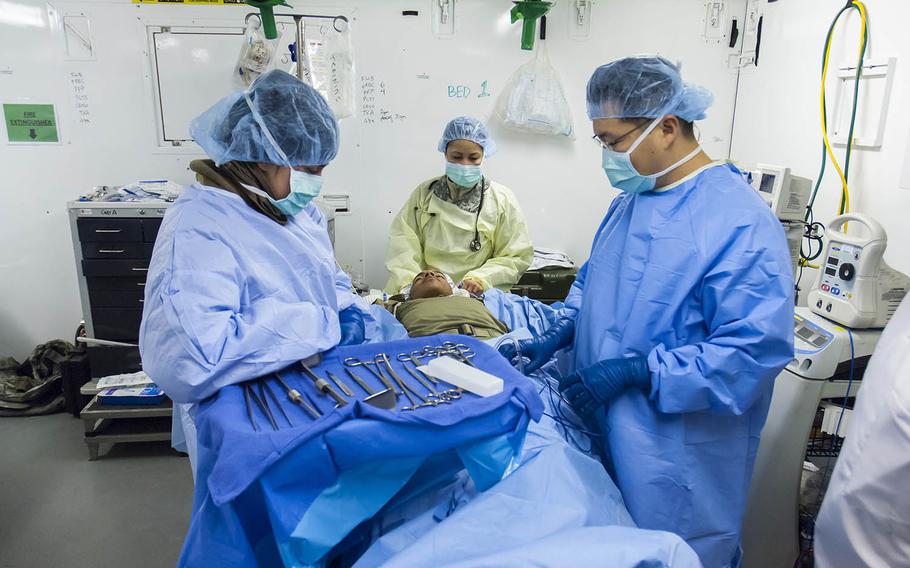 The 212th Combat Support Hospital sets up a field hospital during an exercise, Nov. 7, 2017, in Landstuhl, Germany. Doctors at Landstuhl Regional Medical Center are moving forward with plans to unionize, citing low morale and other factors. (Training Support Activity Europe)

Civilian doctors at military hospitals and clinics in Europe are moving forward with an effort to unionize, citing low morale and compensation as well as staff shortages they say limit access to care.

“Reports are of bad morale at (Landstuhl Regional Medical Center) and a need for representation across the board, but the doctors are particularly anxious for representation. So we decided to file for them first,” said Peter Winch, a representative with the American Federation of Government Employees in Washington.

There are roughly 45 civilian doctors in Europe, stationed mainly at Landstuhl, with smaller numbers at outlying military clinics.

A separate effort is also underway to unionize roughly 600 other civilians, such as Europe-based medical technicians, administrative staff and nurses, union organizers say.

Regional Health Command Europe said Thursday that “management neither opposes nor supports the effort to unionize.”

However, RHCE is disputing the criticisms from doctors, saying its facilities “meet or exceed the standard for patient appointments and [personnel] have opened our clinics over training holidays to further increase access to care.”

“U.S. Army Europe’s Medical Readiness Rate is among the highest in the Army,” Mattorano said in a statement. “A primary contributor to that readiness is the availability of care RHCE medical treatment facilities provide.”

Mattorano said there is no shortage of staffers.

Another criticism from doctors is pay disparity between overseas civilian doctors and their stateside counterparts. Doctors said the medical command has withheld performance awards for top doctors.

“Once again, these have always been automatic, but under this command they are being withheld or delayed for some reason,” said one doctor, who requested anonymity because of fears of reprisal.

The medical command disputed the claims, saying salaries are comparable with other private sector health facilities and that bonuses are paid when earned.

“Our compensation packages have enabled us to hire clinical staff without difficulty,” Mattorano said.

The doctors have obtained enough signatures of interest — roughly 70 percent of them — to petition to unionize, Winch said. A notice to employees was issued by the Federal Labor Relations Authority last month and was posted at Landstuhl and medical buildings on other bases.

The rest of the civilian medical staff in Europe is also collecting signatures and a formal petition to unionize could come in a matter of weeks, said Winch, who has bargained contracts for unionized doctors at Walter Reed National Military Medical Center.

While it is commonplace for federal employees in the U.S. to have union representation, it’s rare in Europe. If successful, the campaign would be the first time Europe-based medical personnel organize into a union.

“When you get a union in, you have a voice on the job when it comes to negotiating work conditions,” Winch said.

The FLRA will review the case and issue a ruling. If it is in favor of the doctors, a secret ballot election among them could be held within six months, Winch said.

A group of five doctors, a civilian technician and a nurse, who are pushing for unionizing, cited a wide range of complaints as the motivation for organizing.

Initial contracts for doctors in Europe are three years, which can be extended to two more years. A “five-year rule” limits tours to that length, which doctors say results in too much turnover and lack of continuity of care, and fosters a work environment that stifles criticism.

“You feel like the leadership will retaliate and not extend your contract,” said another doctor, who also requested anonymity for fear of reprisal.

Most military civilians overseas are subject to the five-year rule, but there are some exceptions, such as for teachers. Doctors say it makes sense that they too be counted as exempt, given their critical skills.

Hospital workers who are part of the unionization effort said frequent turnover due to enforcement of the five-year-rule has resulted in care interruptions and an influx of less-experienced staff.

“This has minimal impact on continuity of patient care because the vast majority of patients enrolled to LRMC remain in Germany for a much shorter time than five years,” Mattorano said.

Still, a hospital staffer, who spent a large part of his active duty career at LRMC before turning civilian, said morale has plummeted.

“It feels like things have spiraled out of control and everyone is looking for a voice,” said the staffer, who is one of the leaders in the effort to unionize.