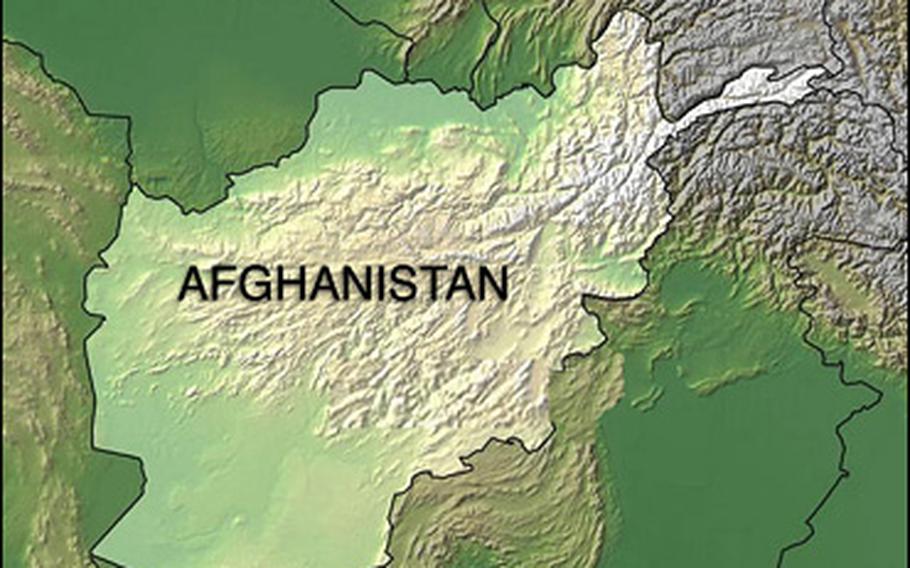 The explosion at Combat Outpost Dash-e-Towp near the town of Sayed Abad tore a hole nearly 30 feet wide in the earth-filled barriers surrounding the base, flattening several prefabricated buildings and heavily damaging the command center.

Of the 22 troops wounded, six required medical attention, said Maj. Lee Ann Tumblson, spokeswoman for Regional Command-East. None of the wounds were life-threatening.

Capt. Matthew Roehm, of the 4th Brigade, 10th Mountain Division, which has purview over Dash-e-Towp, said investigators believe a suicide bomber using up to 2,000 pounds of explosives was responsible for the blast. All the soldiers are in stable condition, he said, adding that he did not know the conditions of the injured Afghans.

The remains of one person, thought to be the driver, were found hundreds of feet away from the blast center.

&ldquo;This is the first time we&rsquo;ve seen that massive an amount of explosives in one spot,&rdquo; Roehm said. &ldquo;Some serious planning went into it.&rdquo;

Speaking from a base a few miles away from the blast, Roehm said the bomber drove to the southern side of Dash-e-Towp around 6 a.m., inching close to the perimeter on what Roehm described as a dirt path between the outpost and an Afghan police training center.

The driver parked beside the massive Hesco barriers ringing the outpost, near several antennas that were visible above the walls. Inside Dash-e-Towp&rsquo;s sandbag-defended command center &mdash; not far from the Hescos &mdash; soldiers on the night shift were preparing to go off duty.

At approximately 6:18, Roehm said, the bomber detonated his load of explosives. The blast punched through the Hescos and into the command center, ripping up the building&rsquo;s interior and wounding soldiers working there. The explosion&rsquo;s pressure wave was powerful enough to destroy four prefabricated barracks, similar to shipping containers, and rip doors from hinges a half-mile away.

&ldquo;No one was living in the [barracks] at the time, or they definitely would have been killed,&rdquo; Roehm said.

The three most seriously injured soldiers were cut by flying debris. The majority of the remaining soldiers were treated for mild traumatic brain injury.

When asked who might be responsible for the attack, Roehm said it was unclear.

An EOD team was still working at the site of the explosion Wednesday night. Roehm said soldiers had recovered a few fingers at the scene and had entered their prints into a military database on the outside chance the remains might belong to a known insurgent.

&ldquo;I don&rsquo;t think it&rsquo;s safe to say it was Taliban at this point,&rdquo; he explained, adding that several anti-government groups operate in the area. &ldquo;We did see a drop in [enemy activity] leading up to this, so it&rsquo;s possibly [that] the enemy was in a final prep phase&rdquo; in the days before the explosion.

The soldiers at Dash-e-Towp, part of Task Force Warrior, are on the downhill side of their yearlong tour. In the eight-and-a-half months they have been working in the area, they have fought numerous battles with insurgents but they had never been attacked with such enormous force.