Gleaves, Seoul dominated when it counted 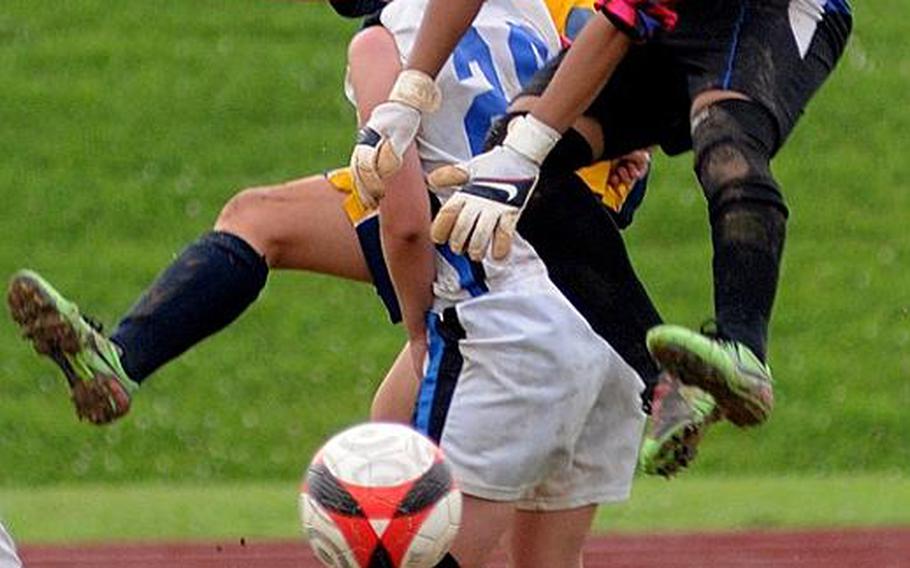 Whether leaping to unthinkable heights to make a soccer save, a basketball bucket or a volleyball spike, Seoul American's Liz Gleaves' athleticism was the talk of Pacific high school sports in 2010. (Dave Ornauer/Stars and Stripes)

Whether leaping to unthinkable heights to make a soccer save, a basketball bucket or a volleyball spike, Seoul American's Liz Gleaves' athleticism was the talk of Pacific high school sports in 2010. (Dave Ornauer/Stars and Stripes) 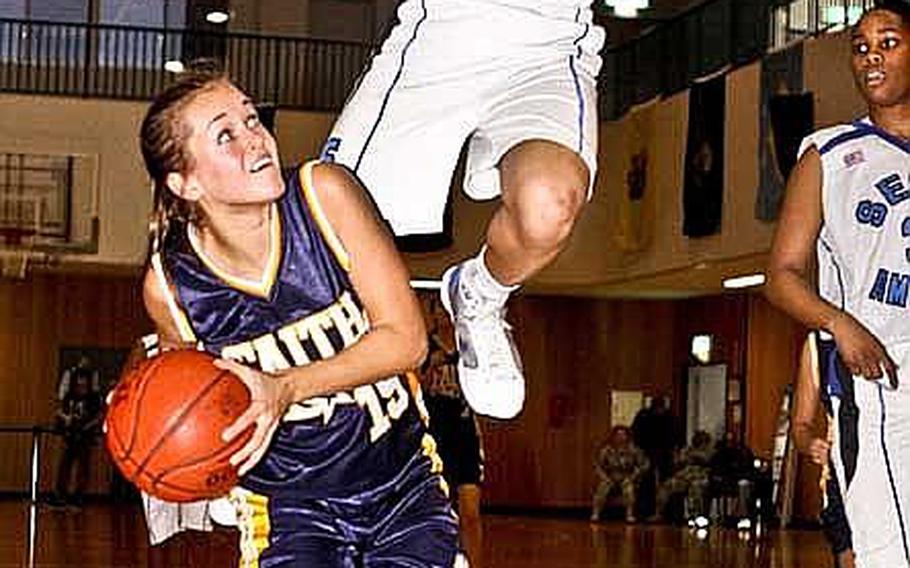 Whether leaping to unthinkable heights to make a soccer save, a basketball bucket or a volleyball spike, Seoul American's Liz Gleaves' athleticism was the talk of Pacific high school sports in 2010. (Dominic Labrador/Special to Stars and Stripes) 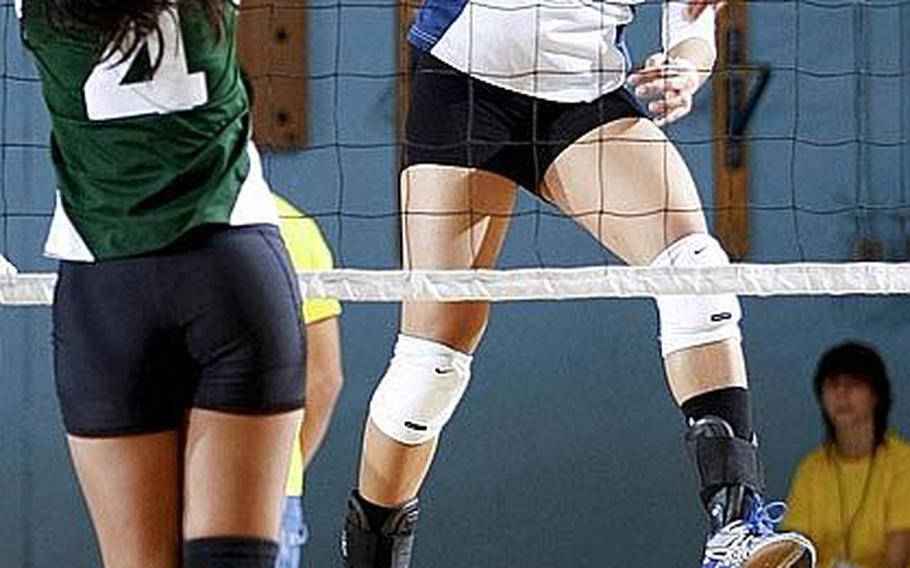 Whether leaping to unthinkable heights to make a soccer save, a basketball bucket or a volleyball spike, Seoul American's Liz Gleaves' athleticism was the talk of Pacific high school sports in 2010. (Gary Cashman/Special to Stars and Stripes) 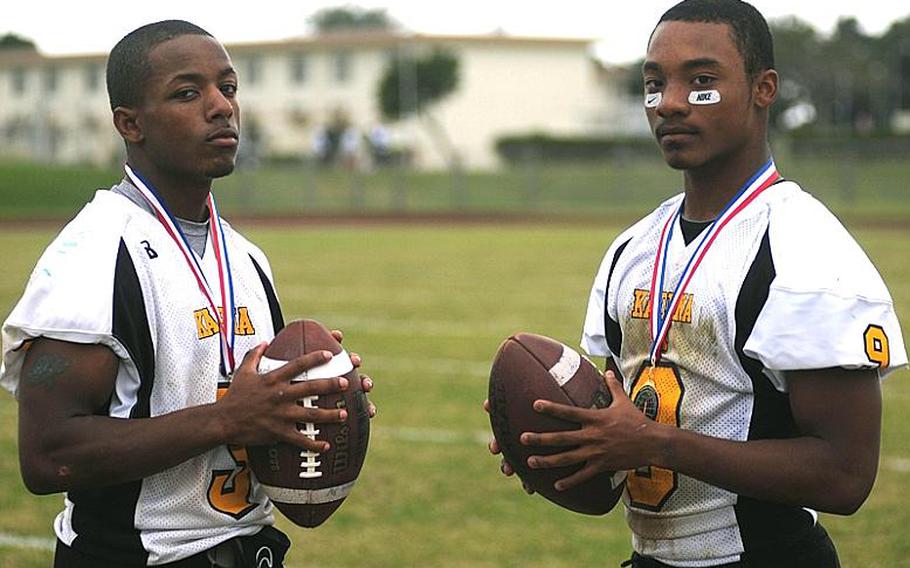 Kadena Panthers senior running-back tandem of Shariff Coleman and Thomas McDonald, were known as Speed Inc. Coleman led the Pacific with 1,148 yards and scored 14 touchdowns on 110 carries, while McDonald led the team with 19 touchdowns and had 1,033 yards on 99 carries this season. The two have combined for 4,018 yards and 69 carries the last two seasons for two-time defending Far East Division I champion Kadena. (Dave Ornauer/Stars and Stripes)

It was Gleaves&rsquo; athleticism, her ability to leap to whatever height needed to make a soccer save, a volleyball spike or a basketball bucket, that had the Pacific talking &mdash; so much that she inspired a Facebook page entitled &ldquo;OMG &mdash; LIZ GLEAVES!&rdquo; which boasts 118 members.

The senior stands just 5 feet, 5 inches. Yet Gleaves and the Falcons stood tallest in Pacific high school sports. Fittingly, they topped the list of this year&rsquo;s top stories.

She became the first girl in DODDS Pacific Far East tournament history to earn three straight MVP awards, and the Falcons, including Destinee Harrison, Gloria Patterson and Tiffaney Mitchell among others, won Division I titles in three sports.

&ensp;On Feb. 20 at Camp Zama, Japan, Gleaves scored 14 points and the Falcons outscored Faith Academy 16-11 in the fourth quarter to rally for a 50-47 victory in the Division I basketball championship.

&ensp;On May 22, Gleaves made six regulation saves and three in the penalty-kick shootout as the Falcons outlasted Faith 1-0 in the D-I soccer final at Okinawa&rsquo;s Kubasaki High School.

For years, coaches and athletics directors lobbied DODDS-Pacific to add baseball, softball and track to the Far East Activities Calendar. In January, they got their wish as DODDS-Pacific director Diana Ohman gave it her stamp of approval, with the tournaments staged in May.

On Nov. 6, the Daegu American football team avenged its loss in the 2009 title game with a 28-2 victory over Zama American that gave the Warriors their first Far East Division II boys title in any sport since taking it all in basketball in 1990. It also gave them a chance to celebrate with their girls volleyball counterparts, who repeated as D-II champions.

Days apart in May, Valerie James&rsquo; three gold medals helped power Nile C. Kinnick&rsquo;s track and field team to the overall team title in the Kanto Plain Invitational Meet on May 17 in Tokyo, then the boys 1,600 relay team recovered from a mid-race spill to win gold and give the Red Devils the overall team title in the Far East meet May 27 at Kubasaki. Kinnick also won the girls team title by five points over Kubasaki.

The only thing missing on Amber Gadsden&rsquo;s tennis r&eacute;sum&eacute; was a Far East Tournament gold medal. On Nov. 11, the Guam High senior crowned her career with two golds, in singles and teaming with her freshman sister Chloe for the girls doubles title at Kadena Air Base. St. Mary&rsquo;s International freshman Kent Shikama did the same, winning the boys singles and teaming with Stefan Byland for the doubles.