Buy Photo
Rolando Hernandez-Nieves, 14, is among the first group of gamers to demo "Call of Duty: Modern Warfare 3" less than four hours before the game's midnight release at the Ramstein Air Base, Germany, PowerZone. (David Rogers/Stars and Stripes)

Buy Photo
Rolando Hernandez-Nieves, 14, is among the first group of gamers to demo "Call of Duty: Modern Warfare 3" less than four hours before the game's midnight release at the Ramstein Air Base, Germany, PowerZone. (David Rogers/Stars and Stripes) 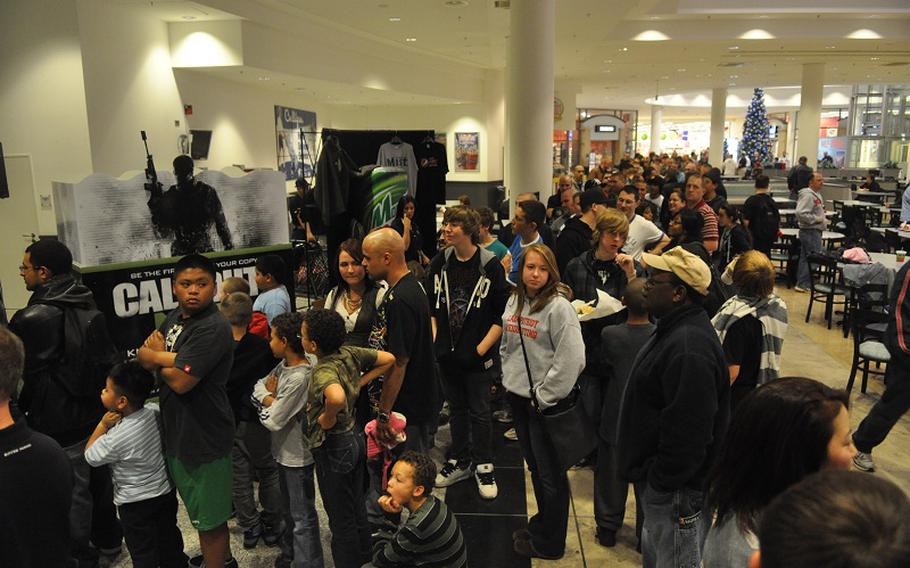 Buy Photo
Crowds gathered to play the "Call of Duty: Modern Warfare 3" demo less than four hours before the game's midnight release at the Ramstein Air Base, Germany, PowerZone. (David Rogers/Stars and Stripes)

KAISERSLAUTERN, Germany &mdash; More than 1,000 Kaiserslautern military community members can brag they were among the very first gamers to try &mdash; and buy &mdash; the latest installment in the &ldquo;Call of Duty&rdquo; series.

Midnight releases of popular entertainment titles like &ldquo;Call of Duty: Modern Warfare 3&rdquo; are common practice for businesses in the United States. But military troops and their families stationed overseas usually must wait for their local Army and Air Force Exchange Service facility to open in the morning to get the latest, greatest game.

&ldquo;You go to the States and there are other retailers that are doing this on a regular basis,&rdquo; Weers said. &ldquo;Overseas, because the exchange is the only source for this product, that was the obvious reason to move in this direction.&rdquo;

Die-hard &ldquo;MW3&rdquo; fans even got the chance to try the game out for a few hours before it went on sale &mdash; a playable demo of the game went on display Monday evening at the PowerZone at Ramstein, four hours before the midnight launch.

Once the cash registers were open, AAFES sold 839 game items, pocketing $59,865 in sales, according to Robin Boylan, a sales and merchandise manager for the Kaiserslautern PowerZone. Information on the exact number of game copies, game consoles and accessories sold was not available.

At the Mainz-Kastel PowerZone at midday Tuesday near Wiesbaden, there was a line of Wiesbaden-based soldiers, civilians and spouses at the cash register, all with copies of &ldquo;MW3&rdquo; in their hands. Asked if a lot of the games had been sold already, the clerk quipped: &ldquo;Yea, we&rsquo;ve sold a few.&rdquo;

When EURPAC released &ldquo;Call of Duty: Black Ops&rdquo; a year ago, the Kaiserslautern exchange got into the action. A YouTube video titled, &ldquo;Running of the nerds kmcc 2010,&rdquo; shows customers crawling under a rising security gate to be the first to purchase the game as the store opened at 9 a.m. that day, Boylan said.

&ldquo;But a lot of people missed out because they were at work or kids were in school,&rdquo; Boylan said. &ldquo;We thought, &lsquo;What can we do better? How can we make this even better for our customers?&rsquo; And that&rsquo;s what we came up with.&rdquo;

Terrie Smallwood and her son were first in line to buy the game. They arrived at the exchange at 6:30 p.m. when her 11-year-old son, Lavarr, found out about the release and asked his mother if they could stay.

Smallwood said she didn&rsquo;t know anything about the game. &ldquo;But he (Lavarr)plays it, and his dad plays it. My son wanted it, and moms do what they gotta do for their kids.&rdquo;Ana Campbell, 21-year-old student at the University of Maryland University College Europe, waited at the exchange for six hours to receive her copy of the game.

&ldquo;I&rsquo;m going to brag on Facebook about it,&rdquo; Campbell said. &ldquo;I know people in the States won&rsquo;t have it for a while. Especially, my brother. He&rsquo;s like in love with the game. So he&rsquo;s going to be very jealous about it.&rdquo;

Boylan said that, based on the &ldquo;Modern Warfare 3&rdquo; midnight release, AAFES will consider doing similar events in the future for anticipated entertainment releases.

Stars and Stripes reporter Mark Patton contributed to this story.