Fighting back: Combat wounded strive to return, but results vary 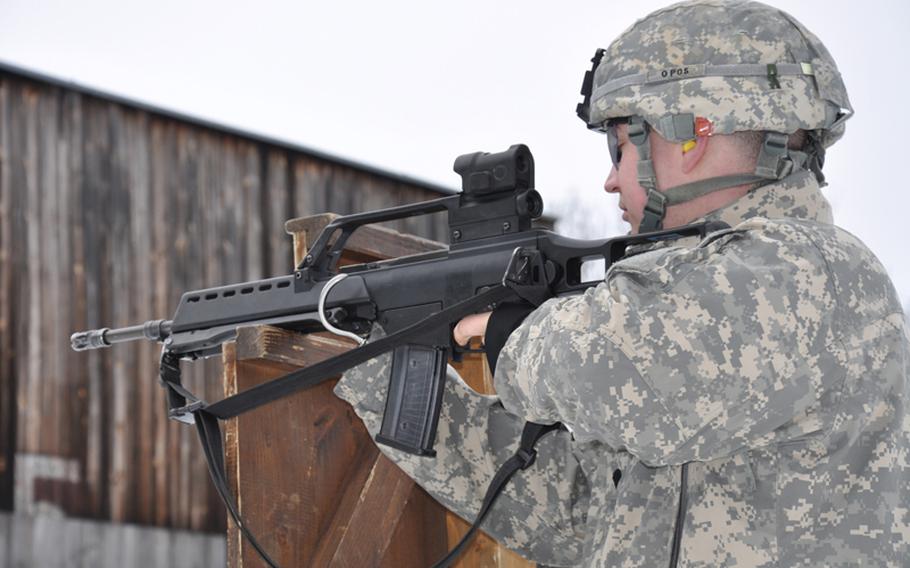 Buy Photo
Spc. Jake Altman aims at his target while competing for the German proficiency badge at the German Infantry School in Hammelburg, Germany, in February. (Dan Blottenberger/Stars and Stripes) Air Force Tech. Sgt. Israel Del Toro and his wife, Carmen, finally had the church wedding and reception of their dreams in August 2009, four years after a roadside bomb almost killed Del Toro, burning over 80 percent of his body, and seven years after they tied the knot in a civil ceremony. In February, Del Toro became the first airman to re-enlist with a 100 percent combat medical disability. (Courtesy of Israel Del Toro) Air Force Tech. Sgt. Israel Del Toro at first didn't fare much better than the charred remains of the Humvee he was riding in that exploded on Dec. 4, 2005, in northern Afghanistan. After a long recovery that included more than 120 surgeries, with more pending, Del Toro in February became the first airman to re-enlist with a 100 percent medical disability rating. (Courtesy of Israel Del Toro) 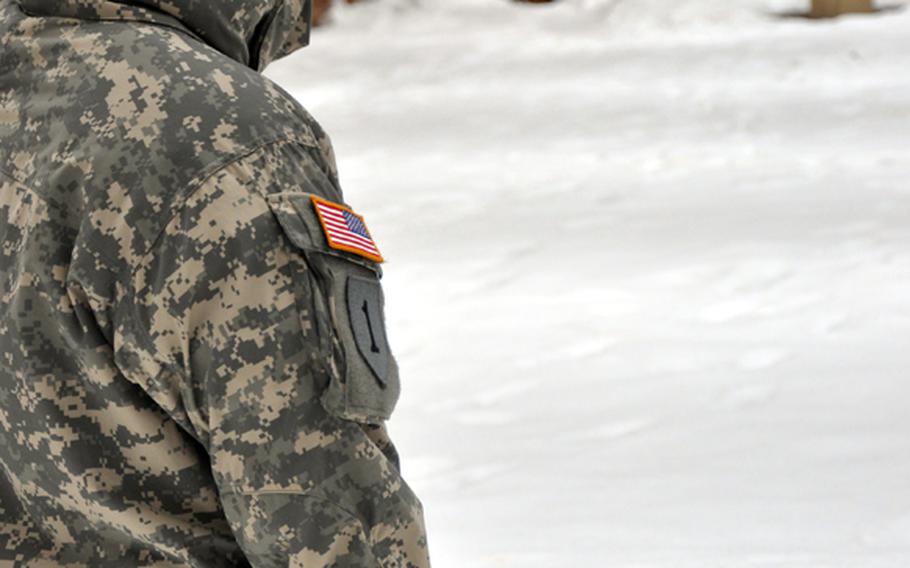 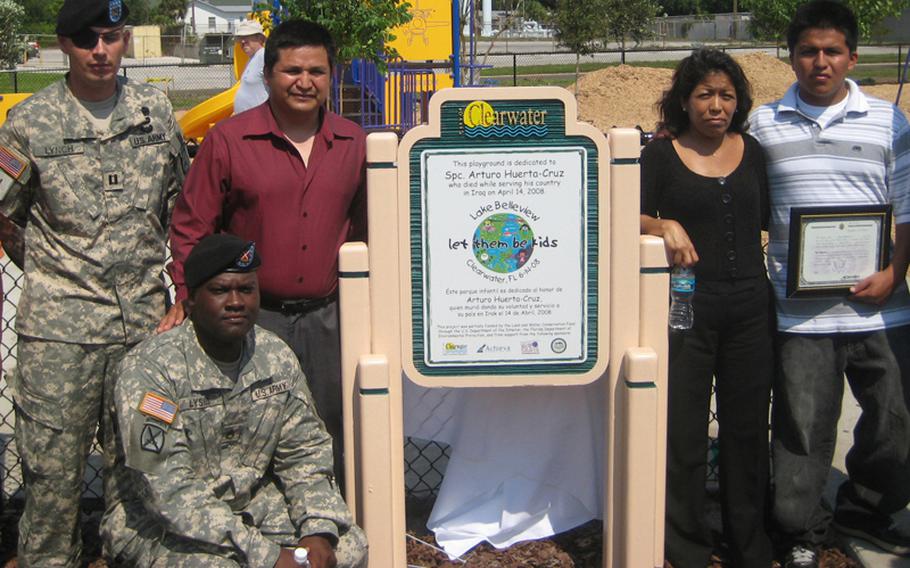 Maj. Andrew Lynch, left, then a captain, attends a playground dedication ceremony with the family of Spc. Arturo Huerta-Cruz, who was killed by the same blast that injured Lynch's right eye. Lynch lost the eye and suffered a tramatic brain injury in the April 2008 attack. He remains on active duty. The playground was dedicated in the name of Huerta-Cruz. (Courtesy of Gary Hoffman)

A roadside bomb had exploded under the Humvee that Del Toro was riding in while supporting soldiers with the 173rd Airborne Brigade Combat Team in a remote part of northern Afghanistan.

Flames engulfed his entire body. He jumped out of the truck and made it to a nearby creek with help from an Army lieutenant. Rolling into the water, &ldquo;I heard the same sound you hear when you stick a hot pan in cold water,&rdquo; he said.

Since the Dec. 4, 2005, explosion, Del Toro, now 34, has undergone more than 120 surgeries. He&rsquo;s learned to walk and run with a carbon brace and breathe without a respirator, something his doctors expected would never happen for a man burned over 80 percent of his body.

When you look at him today, nearly five years later, it&rsquo;s hard to see the old Israel Del Toro. His lips, part of his nose and his eyelids were burned off. He lost both ears. Facial reconstruction is ongoing.

But one thing hasn&rsquo;t changed: He&rsquo;s still in the Air Force.

Waiver allows returnDel Toro re-enlisted in February and became the first airman to return to active duty with a full-disability rating under a 2008 Air Force rule that allows more severely injured airmen to continue to serve.

Del Toro now trains incoming recruits at Lackland Air Force Base, Texas, to be joint terminal attack controllers, the airmen assigned to soldiers on the ground to call in close air support.

&ldquo;I love my job and I want to finish serving my country,&rdquo; he said in April.

The Air Force, Army, Marine Corps and Navy allow disabled troops to apply for permission to continue on active duty after being found &ldquo;unfit for duty&rdquo; by medical boards. It&rsquo;s not a simple process, and not everyone who is approved to return makes a successful long-term transition.

The services use special evaluation boards made up of medical experts, peers, senior leaders and recruiters to judge each application, military officials said in interviews this spring.

About 200 soldiers, 58 Marines, 33 sailors and six airmen have petitioned for, and won, the ability to continue to serve even though the military has found them unfit for duty.

The Marine Corps has approved all requests from disabled Marines who want to remain on active duty, said Capt. Rob Adams, who heads up the Marine Corps&rsquo; disability section. Currently, seven Marines considered 100 percent disabled are serving, including Cpl. Matthew Bradford, who in April became the first blind double amputee to re-enlist in the Marines. Last year, the Army approved 70 percent of those who asked for special permission to &ldquo;continue on active duty,&rdquo; according to Army Lt. Col. Kathie S. Clark, a medical policy officer within the Army&rsquo;s personnel office.

Two years ago, Lynch, a logistics officer, commanded a forward support company within 1st Brigade, 10th Mountain Division out of Fort Drum, N.Y. Lynch, then a captain, was part of a team working with Iraqi Oil Police to stop oil smuggling near Tuz Khormato.

On April 14, 2008, a powerful roadside bomb called an explosively formed penetrator , or EFP, hit the passenger side of the Humvee that Lynch was riding in. It killed his driver, Spc. Arturo Huerta-Cruz. It blasted across Lynch&rsquo;s face, destroying his right eye and restricting his breathing.

Within a week, Lynch was at Walter Reed Army Medical Center in Washington, D.C., with a traumatic brain injury diagnosis.

&ldquo;The only option at that point was to remove the eye,&rdquo; he said in March. &ldquo;I guess I came to terms with it before that. Walter Reed is one of those places where people have major wounds. Having something as small as losing an eye didn&rsquo;t seem like that big a deal.&rdquo;

Lynch spent eight months at Walter Reed, relearning to walk, eat and eventually fire a weapon. A West Point graduate who had every intention of serving 20 years, he began the bureaucratic slog of convincing the Army he should retain his commission.

The Army provides soldiers like Lynch with a case manager to help navigate the application process. He gathered letters of recommendation and his military records and forwarded them to the Physical Disability Agency within the Army, which then convenes a board of officers and peers to review the application, Clark said.

Lt. Col. Ron Novack was Lynch&rsquo;s battalion commander in Iraq and was with him soon after the bomb went off in 2008.

&ldquo;At that point, I just prayed that he would be OK,&rdquo; Novack said. &ldquo;That was really the only thing I could do at that point.&rdquo;

That November, the unit returned to Fort Drum, N.Y. In January, Lynch was back serving under Novack &ldquo;fully fit for duty,&rdquo; Novack remembers. &ldquo;It was like he didn&rsquo;t even skip a beat.&rdquo;

Downrange difficultiesNot every soldier&rsquo;s return story turns out so well.

Spc. Jake Altman was inside a one-man reconnaissance vehicle in Iraq on May 14, 2007, when an EFP exploded. Altman, a combat engineer with Company B, 9th Engineer Battalion, 2nd Brigade Combat Team, 1st Infantry Division, found himself holding his right hand. It was severed.

&ldquo;I remember everything after that,&rdquo; he said. &ldquo;Freaking out &mdash; a lot of swear words.&rdquo;

Altman, too, ended up at Walter Reed, facing a year and a half of daily physical therapy and learning to use a prosthetic arm.

He learned to shoot with his remaining arm, qualifying as expert, the Army&rsquo;s highest classification. He, too, applied for permission to continue on active duty and, after dealing with some lost paperwork, prevailed.

In some ways, getting back downrange was the easy part.

Altman deployed in March 2009 with the same unit, though now a part of the 172nd Infantry Brigade, under his same job, combat engineer. The heat and sand irritated his stub. He found some in his unit less than supportive.

&ldquo;At first it was all right,&rdquo; he said. &ldquo;Then I tried to do all the stuff they expected me to do.&rdquo;

Altman, now 23, was reluctant to lay blame. But he said he ultimately felt abused after superiors put him on guard duty without his prosthetic arm and hook.

First Sgt. William O&rsquo;Brien, who was a sergeant first class when he deployed with Altman during both tours, remembers it differently. He said he saw Altman struggle with everyday duties: shooting, driving, even getting up in the morning.

&ldquo;It was hard for him seeing that other people could perform certain tasks better than him,&rdquo; O&rsquo;Brien said in April.

The command assigned him to a desk job, a task Altman found unrewarding, O&rsquo;Brien said.

The unhappy situation led Altman to seek help from his Warrior Transition Unit in Schweinfurt in the middle of the deployment, when he was back in Germany on leave. The WTU arranged for him to remain in Germany instead of finishing his 12-month tour.

Despite the challenges, O&rsquo;Brien said it was a good thing the military let Altman and others like him volunteer to return to war.

Altman is bitter about the experience.

&ldquo;Wounded soldiers get treated like [expletive],&rdquo; he said of his situation when deployed. &ldquo;We are looked at as useless, but the Warrior Transition Unit is a really good thing. It helps soldiers &mdash; not break them down.&rdquo;

In the weeks after his return, Altman had planned to stay in the Army. But as of early April, he&rsquo;d decided to seek a medical discharge.

&ldquo;I&rsquo;m ready to call it quits,&rdquo; he said.

Up to the challengeDel Toro is ready to start a new chapter in his Air Force career. He&rsquo;s officially on limited status, which means he won&rsquo;t be required to deploy again. (The Army doesn&rsquo;t have this limited status option.)

He&rsquo;s teaching incoming recruits how to do the job he still loves, that of a joint terminal attack controller.

To get there, he ignored the doubts some had about whether he could do his job.

Five kilometers in 34 minutes, at last count. He said that&rsquo;s a bit disappointing; he used to run it in closer to 20 minutes.

The true test, he believes, will come this summer. He&rsquo;s lost the outer protective layer of skin over most of his body and sweats only through his head, a small area on his chest and his right forearm.

He believes he&rsquo;s put to rest the worry that he would frighten trainees away from his career field after seeing &ldquo;a blown-up, burnt guy,&rdquo; Del Toro said.

So far, airmen have reacted to him with questions. They shake his hand and ask why he became a joint tactical air controller.

&ldquo;If I have an airman who still wants to do my job knowing the true risks, then that&rsquo;s an airman I want in my career field,&rdquo; Del Toro said.

Each year, he&rsquo;ll have to undergo a medical screening to assess his condition. He&rsquo;s awaiting more surgeries. He doesn&rsquo;t know yet if he&rsquo;ll be required to take the Air Force physical training test, but he said he&rsquo;s up to the challenge.

&ldquo;People try to call me a hero,&rdquo; he said. &ldquo;I&rsquo;m not a hero. I&rsquo;m just a regular guy who had a bad day.&rdquo;