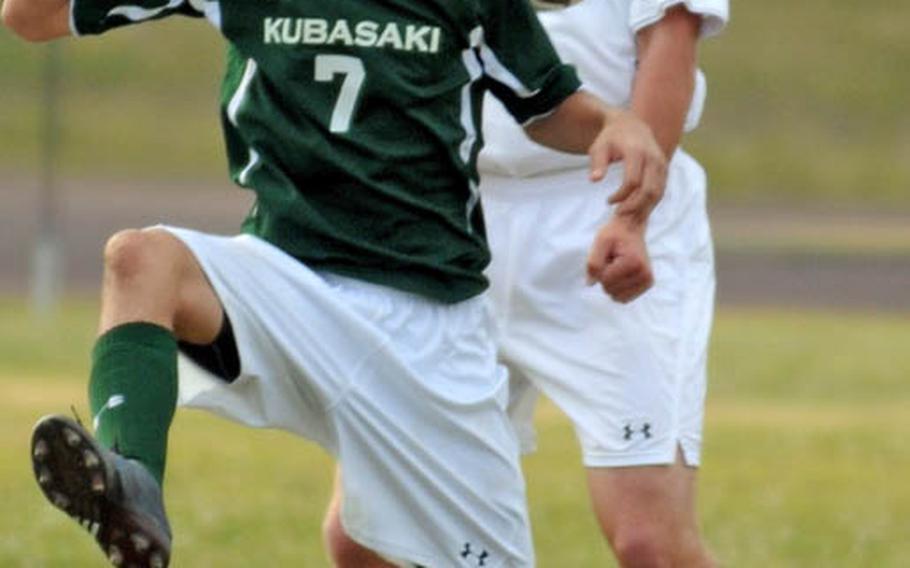 Buy Photo
Sean Neill (7) of Kubasaki and Thomas Cote of Kadena try to field the ball during Friday's match at Kadena Air Base, Okinawa. (Dave Ornauer/Stars and Stripes) 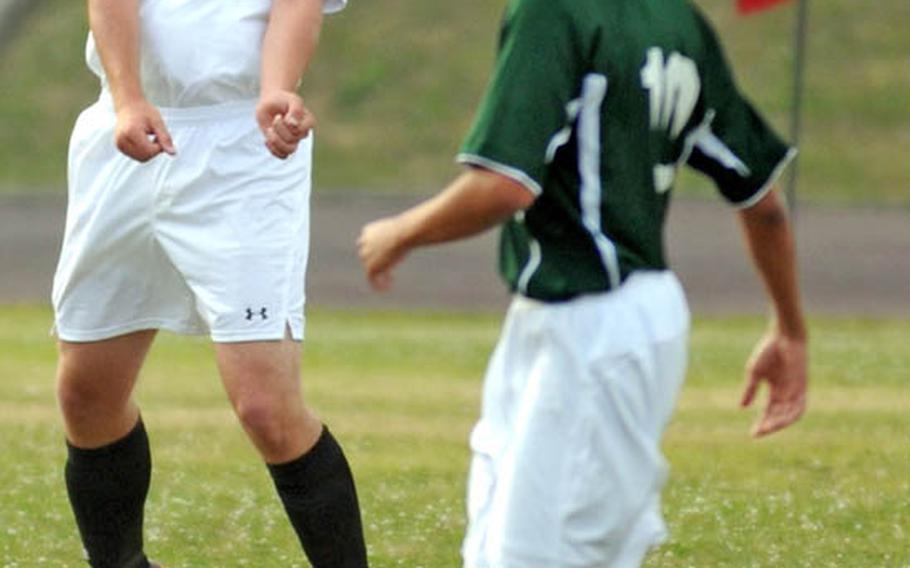 Liam Neill headed in a Mike Griffith corner kick in the 75th minute, giving the Dragons their only lead in a match in which they trailed most of the way, but somehow came out with a 4-3 victory over the Panthers in an epic clash at Kadena High School.

The difference between the two matches? Aaron Ahner, Kadena&rsquo;s senior sweeper, who can throw a soccer ball 40 yards and kick it nearly twice as far. He assisted on two goals off lengthy throw-ins into the area, where Dalton Choquette headed them into the net, giving Kadena second-half leads of 2-1 and 3-2.

&ldquo;Good God, he changes those set pieces so much,&rdquo; Kubasaki coach Chris Eastman said. Against Kadena, because of Ahner, &ldquo;we say when the ball is rolling, that&rsquo;s good, but when it stops, we&rsquo;re in trouble. With him, every set piece is a scoring opportunity.&rdquo;

Ahner missed the March 11 match when he traveled to Tokyo for the Camellia Bowl, a friendship football game that was canceled due to the Tohoku-Kanto earthquake.

&ldquo;You have to account for everything he does,&rdquo; Kadena coach Tom McKinney said.

The win gave Kubasaki (6-2 overall) a two-match edge over Kadena (1-4) in the three-match season series, with the third match later this month. And it resembled many of the epic battles between the Far East Division I Tournament&rsquo;s most decorated teams over the past 15 years.

After Choquette&rsquo;s first goal in the 49th minute, Griffith took a through pass from Nick Barker and leveled it in the 53rd. Choquette scored again in the 64th; five minutes later, Leo Muro made a deft cutback from the left toward the middle and banged home the equalizer.

&ldquo;That was like a (Far East) finals match,&rdquo; Kubasaki senior defender Jon Goddard said as the teams did their traditional handshake after the match.

In need of scoring power with two-time All-Far East striker Kristina Bergman still on the shelf with an injury, coach Ed Thompson moved freshman sweeper Sarah Wright up to forward &ndash; and the move paid off in spades for Daegu American&rsquo;s girls.

Wright scored four times, twice on breakaways and twice on &ldquo;right place at right time&rdquo; plays, Thompson said, as the Warriors rallied from a 2-1 halftime deficit for a 5-3 road win at Seoul International.

&ldquo;Sarah has a knack for being where she needs to be,&rdquo; Thompson said. &ldquo;We needed a forward presence in this match and she gave it to us.&rdquo;

Elsewhere in the Pacific on Friday:

Dominic Shea went 3-for-4 with a homer, four RBIs and two stolen bases and Jayce Moore got his second win over Kubasaki, this time in relief, as the Panthers for the first time since 2005 got their second win over the Dragons in one season. Kadena romped 20-10 in six innings at Camp Foster.

Stephanie McDole continues to provide scoring touch for Osan American&rsquo;s girls soccer team; she scored twice, giving her five goals for the season, as the Cougars improved to 2-0-1 in their last three matches, blanking Yongsan International-Seoul 2-0. Jimmy Kim scored twice, giving him seven for the year, as the Guardian boys beat Osan 3-1.

Kathy Lee scored her 11th goal of the season and Ben Neumann got his seventh and eighth for Seoul Foreign, whose boys (6-1-2) blanked Korea International 8-0, while the girls, a Korea best 9-0, shut out the Phoenix 2-0.