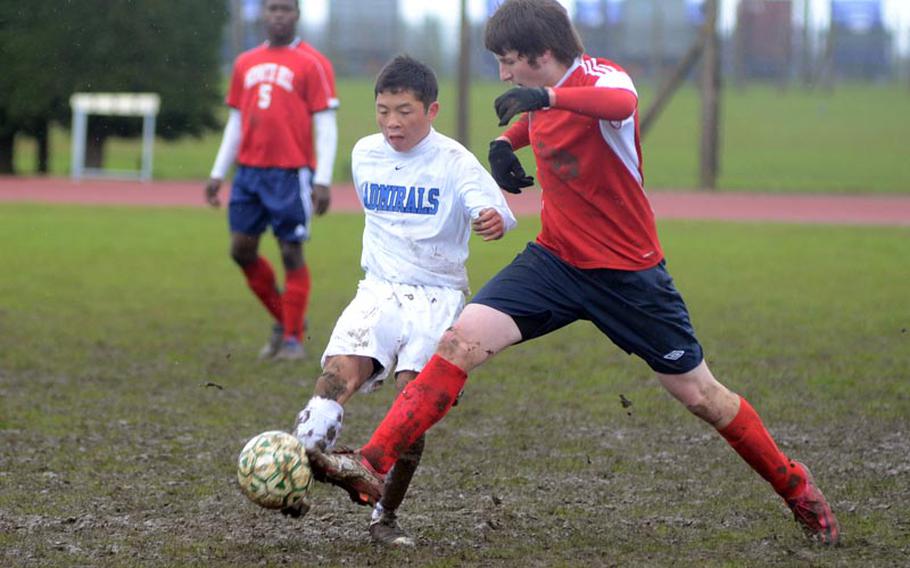 Buy Photo
Menwith Hill's Schuyler Backlar, right, steals the ball from Rota's Kris Rios during DODDS-Europe Division-III play at RAF Alconbury, England, on Saturday. Backlar scored the only goal of the match for the Mustangs. (David Hodge/Stars and Stripes)

Buy Photo
Menwith Hill's Schuyler Backlar, right, steals the ball from Rota's Kris Rios during DODDS-Europe Division-III play at RAF Alconbury, England, on Saturday. Backlar scored the only goal of the match for the Mustangs. (David Hodge/Stars and Stripes) 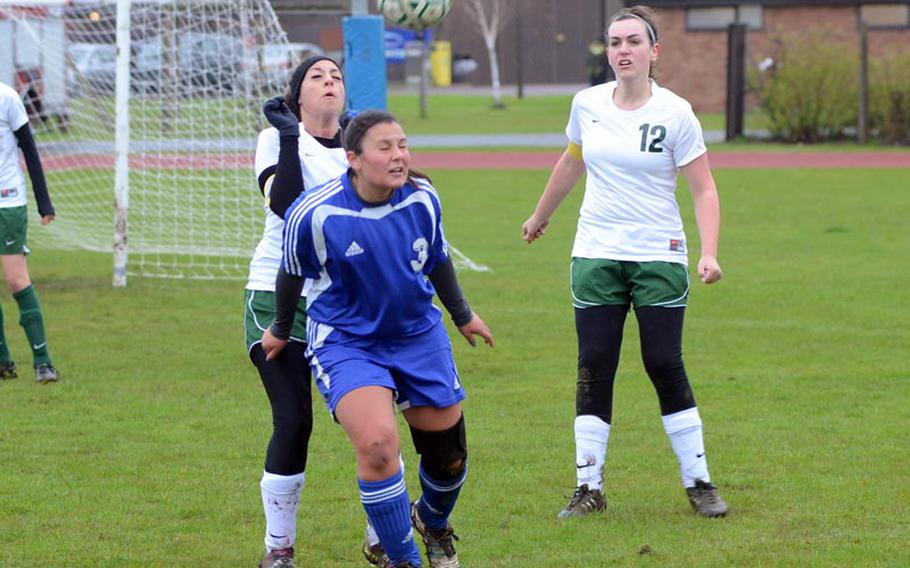 Buy Photo
Alconbury's Jeff Black leaps to head the ball toward the goal during a game against Brussels on Saturday at RAF Alconbury, England. The Dragons defeated the Brigands by a score of 1-0. (David Hodge/Stars and Stripes) 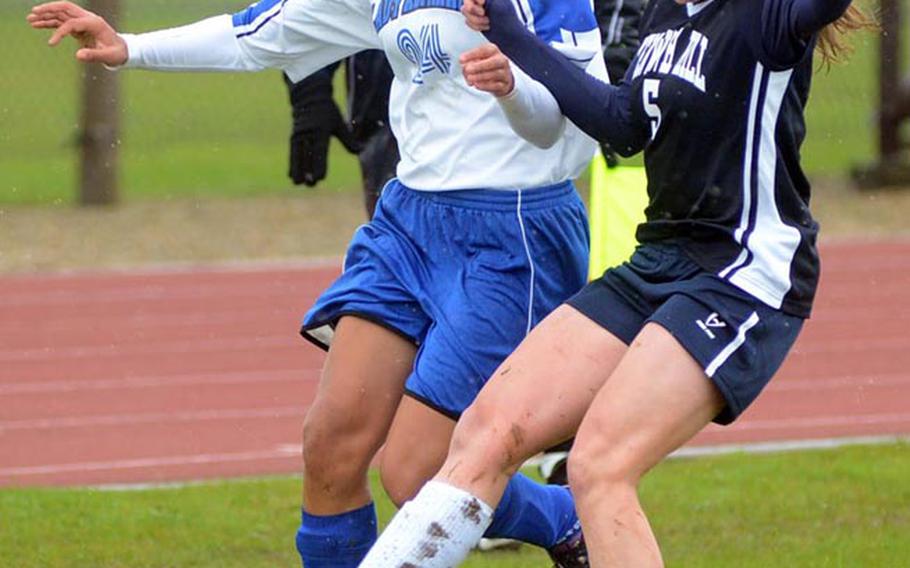 Buy Photo
Menwith Hill's Samantha Cubbler, right, tries to break up an offensive run by Rota's Gabby Rivera, Saturday, at RAF Alconbury, England. Cubbler scored the only goal of the match to lead the Mustangs to a 1-0 victory. (David Hodge/Stars and Stripes) 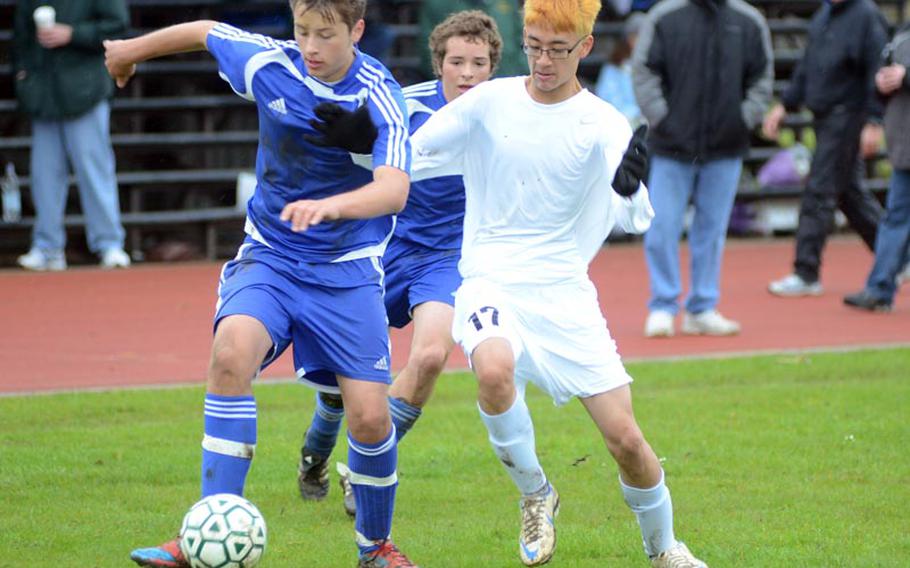 Buy Photo
Brussels' Nick Marinich fends off Alconbury's Thomas Luong during a game Saturday at RAF Alconbury, England, The Dragons won the match by a score of 1-0. (David Hodge/Stars and Stripes)

RAF ALCONBURY, England &mdash; Day 2 of a rain-soaked, wind-swept and cold DODDS-Europe Division-III soccer round-robin tournament made for tough play as the field showed signs of wear and tear and uniforms turned the color of mud.

Similar to Friday, Alconbury had the first match of the day &mdash; this time against Brussels &mdash; and co-captain Tyler Grissett picked up right where he left off by sending a ball towards the net in the first half of play. Midfielder Ryan Mantell put the ball in the back of the net and that was it for the scoring.

Next, the Alconbury girls hosted their Brussels counterparts in what would be the highest scoring affair of the tournament &mdash; a 4-0 shutout by Brussels. Ali DeFazio scored the first goal and then senior Alexandra McVicker scored the next three for the Division-III European runners-up last season.

McVicker, who has scored eight goals during the season, said after the game that she was proud of her team.

&ldquo;I think our ladies played really well,&rdquo; she said. &ldquo;We had great teamwork out there. It was one of our best games.&rdquo;

Menwith Hill, who didn&rsquo;t play Friday, showed up ready to play. The girls faced last year&rsquo;s European champion, Rota, and came away with a 1-0 victory in a closely fought match in sketchy conditions.

Turnovers in the midfield area by both teams resulted in few accurate shots on goal, but Menwith Hill&rsquo;s Samantha Cubbler shot one over Rota keeper Tiffani Driscoll&rsquo;s head from about 18 yards out. It clipped the bottom of the crossbar and landed in the goal.

&ldquo;She&rsquo;s got a sweet left leg,&rdquo; Mustang coach Pete Resnick said after the game. &ldquo;Anytime she can tee up with that left foot, it&rsquo;s sweet to watch.&rdquo;

Menwith Hill keeper Kaia Pierce had a pair of saves during the game and Resnick noted how Pierce isn&rsquo;t normally the team&rsquo;s keeper &ldquo;but she stepped up big for us.&rdquo;

The boy&rsquo;s teams from Menwith Hill and Rota played the last game of the day. Although the game ended with a 1-0 score in favor of the Mustangs, the play was non-stop with many scoring opportunities for each side.

Menwith Hill&rsquo;s Schuyler Backlar capitalized on a defensive mishap by the Admirals when a player tried to clear the ball and accidentally sent it directly to Backlar, who put it in the net in the early part of the second half.

With only seconds to play, a costly penalty by the Mustangs gave the Admirals a penalty kick. But the kick seemed to go directly to the waiting keeper, Kyle Hermsen, and the Mustangs held on for the win.