AFRICOM in the Congo

Congolese battalion trained with purpose, but armed mostly with promises Buy Photo
After a year of training with the Americans, many of the young soldiers in the Congolese battalion say they&#39;re now prepared to deploy to conflict zones in Congo&#39;s east. Before any kind of commitment is made to train another battalion, U.S. government officials say they want to see how this battalion performs in the field. Within the Congolese military, there is a long history of soldiers committing human rights violations. (John Vandiver/Stars and Stripes)

Buy Photo
After a year of training with the Americans, many of the young soldiers in the Congolese battalion say they&#39;re now prepared to deploy to conflict zones in Congo&#39;s east. Before any kind of commitment is made to train another battalion, U.S. government officials say they want to see how this battalion performs in the field. Within the Congolese military, there is a long history of soldiers committing human rights violations. (John Vandiver/Stars and Stripes) 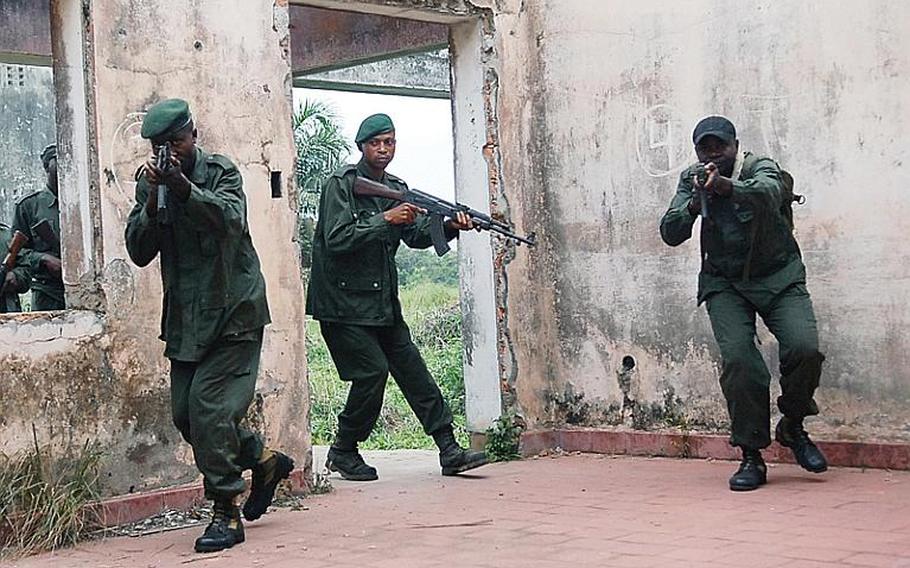 Buy Photo
In the military camp in Kisangani, soldiers perform room-clearing exercises in the dilapidated old Belgian army officer quarters. These soldiers have been selected to serve as future trainers at the camp. The U.S. hopes that the base will evolve into a training center, where the Congolese can run military instruction programs on its own. (John Vandiver/Stars and Stripes) 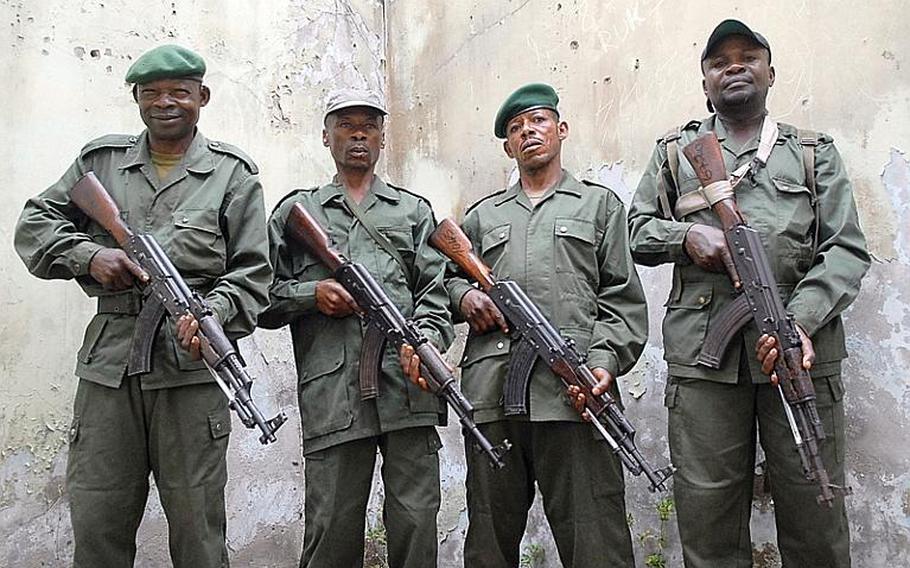 Buy Photo
Second Lt. Konga Muhgbohgi, 65, has spent his adult life in the military. Like the other men pictured, he is airborne qualified and received extensive training from the French and Belgian militaries. Today, Muhgbohgi is outranked by men who, in some cases, have never received formal military training. Connections sometimes matter more than experience. Nonetheless, these soldiers are skilled enough that they&#39;ve been selected to serve as permanent trainers at Camp Base in Kisangani. (John Vandiver/ Stars and Stripes) 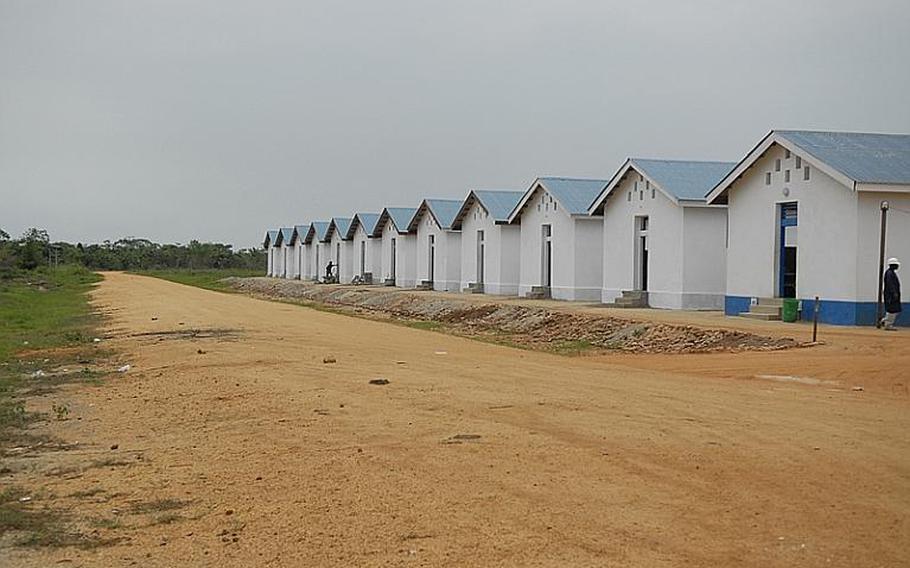 Buy Photo
The U.S. has spent roughly $14 million on efforts to refurbish the military camp at Kisangani, where hardcover barracks buildings will replace tents soldiers there now call home. (John Vandiver/Stars and Stripes) Buy Photo
While much of the focus at Camp Base in Kisangani is on infantry skill instruction, U.S. Africa Command also has provided de-mining training to soldiers. U.S. troops have trained a team of Congolese who are expected to serve as in-resident trainers, capable of providing explosive ordnance disposal training to troops passing through the camp. (John Vandiver/Stars and Stripes) Buy Photo
Pvt. Kasereka-Kasivire Heritier, center, a 21-year-old soldier with the Congolese army has been trained along with 750 other soldiers by Americans for the past year. Like many of his peers, Heritier&#39;s fighting life began long before he joined the army, serving with militia groups in the strife-stricken eastern part of the Democratic Republic of the Congo. Now, this newly trained battalion of soldiers is slated to deploy to a hot spot to take on a rebel group. The question now is whether the roughly $20 million spent by the U.S. to train the battalion will pay dividends. (John Vandiver/Stars and Stripes)

KISANGANI, Congo - The oppressive afternoon sun was still hours away, but by mid-morning the men in this American-trained battalion of Congolese soldiers were already exhausted.

"Where is your weapon?" asked an American trainer after observing a young soldier saunter by without his AK-47.

"I don't have," the soldier answered with a shrug.

"Infantry with no weapon?" the American muttered to himself, shaking his head.

While the Congolese troops battled through a day of physical fitness tests, squeezing out as many pushups and sit-ups as they could, they were fighting the sluggishness that comes from training on an empty stomach.

"Train, train, train - No eat!" shouted a Congolese enlisted soldier when asked about conditions at Camp Base, where meals arrive only once a day.

For the U.S. Africa Command, here to build a new rapid reaction battalion, the inability of the Congolese government to adequately pay, equip and feed its troops is deeply worrying. Without a reliable food source, troops in the field have often resorted to stealing from vulnerable civilians - to say nothing of the negative performance impacts of inadequate nutrition.

"When they hit the bush, you can tell the difference between three meals a day and one," said Ken Spueil, a former U.S. soldier who works with reconnaissance troops at the Kisangani camp. "You're limited with what you can do with these guys."

The difficulty for the U.S. now lies in deciding how far to go with its military partnership, and whether the training can have far-ranging effects.

Since last year, the U.S. has poured $35 million into its efforts at the camp in Kisangani, but without continued assistance in the form of money and trainers, it is unclear whether the Congolese will be able to sustain what the Americans have helped them start.

For example, in September, when the U.S. stopped providing food for the battalion at the camp, transferring that responsibility to the Congolese government, meals abruptly dropped from three a day to just one.

Lt. Col. John Pierre Molengo, the commander of the Kisangani camp, downplayed the significance of the food and salary problems, instead blaming U.S. troops who introduced a standard that is difficult to match.

"We were spoiled by eating like Americans," he said. "The soldiers' normal way of eating changed."

Now, as the battalion prepares to embark on military operations against the rebel Lord's Resistance Army on a far-flung battlefield in the country's north, it is unclear how a steady supply of food and equipment will reach the soldiers.

The U.S., which isn't providing such operational support, is gambling that Congolese officials will make good on their promises to feed and equip their men - and thus discourage them from preying on the very civilians they are supposed to protect.

But even before deploying, frustrations were mounting among the troops, who complained that their $45 monthly salary is not enough to feed their families.

Here in the Democratic Republic of the Congo - soon to become the second-largest country in Africa once Sudan splits, bordering nine other nations in a tough and unfriendly neighborhood - there's hardly been a time when large-scale humanitarian calamities didn't loom as an everyday threat.

Between 1998 and 2003, more than 5 million people died as a result of war in the Congo, which drew in eight countries and dozens of armed groups. Many of the tensions continue today between rebels and military forces in the eastern part of the country, where the conflict is fueled by a competition for territory and valuable minerals.

James Entwistle, the U.S. ambassador to the DRC, said U.S. involvement is intended to "make sure what happened here in the late &lsquo;90s, early 2000 doesn't happen again."

"The needs here are overwhelming," he said.

"If you want stability in central Africa, you need to be involved here," said a U.S. military official speaking on background about the mission in Congo.

Greater security also could open the door to more economic development in a country that possesses some of the world's largest reserves of rare-earth minerals essential for producing everything from nuclear bombs to cellphones.

Congo also encompasses half of Africa's forests and a river system that could provide hydro-electric power to the entire continent, according to a United Nations report on the country's strategic significance.

"This should be one of the richest countries on Earth," said Entwistle. "The potential here is phenomenal."

The treacherous security climate has deterred many Western corporations from investing here. But China has not hesitated to fill the void, investing billions of dollars to support its mining interests and feed the Chinese appetite for resources.

"They focus on development projects, rather than worry about good government," Entwistle said. Still, "they have some of the same frustrations that other foreign investors have here."

The government's military, known as the FARDC, or Forces Arm&eacute;es de la R&eacute;publique D&eacute;mocratique du Congo, is largely an army in name only. The soldiers at Camp Base reflect the country's fragmented military past: an amalgamation of some 55 rebel groups integrated over the past 10 years with virtually no training.

The troops have come from all over the country. Some speak French, others Lingala or Swahili. The ranks are filled with the very young and the very old.

Against this backdrop, Special Forces troops from U.S. Africa Command launched a six-month program in early 2010 to build the new rapid-reaction battalion. In September, those soldiers handed the mission off to U.S. contractors.

The U.S. has spent $15 million refurbishing facilities at the base, which could serve as an instructional hub for soldiers across the country. Construction crews are building hardcover barracks to replace the tents soldiers currently call home.

Since 2009, AFRICOM also has trained about 100 Congolese personnel as part of a humanitarian de-mining program.

"The focus now is on getting these guys to lead the training themselves," said Jack Holly, the chief of AFRICOM's humanitarian mine action branch.

Already, a cadre of Congolese soldiers who have been singled out for their skill are leading a similar effort to serve as trainers for the infantry.

During a recent training day, the hand-picked Congolese mentors were busy working on their room-clearing skills with American instructors. Unlike many of the soldiers on the base, who have little formal training, these men had many years of experience, and the difference quickly showed as they swiftly moved through the drill with their rifles fixed on the target.

"We're trying to reform our army, and we're doing what we can to enforce army doctrine here," said 2nd Lt. Konga Muhgbohgi, a 65-year-old soldier who attended military schools in France and Belgium during the early days of a military career that started in 1968.

Though Muhgbohgi is outranked by men half his age in today's Congolese army, the soldier said he was pleased to have a job.

"I have no money and there is no retirement system in this country," he said.

While many of the men being trained come from undisciplined rebel groups, the older Congolese trainers are a remnant of a once-formidable force that operated under regimes with reputations for brutality. The soldiers know about tactics, and they contend that their younger counterparts are learning.

"These guys want to go out and defend their county," said Capt. Josef Ngbale, who also received training from foreign armies in the 1970s. "If we can continue with this training, we will build a strong army."

Off to the fight

Among the rank-and-file soldiers, Spueil said he's seen a slow transformation. After months of training, the battalion has begun to develop the kind of esprit de corps essential for unit cohesion.

Still, he harbors concerns. There's a history of violence among the men and many have witnessed searing atrocities. Will the lessons about rule of law and discipline hold up under the strain of combat? Or will the men fall back on old ways when they disappear into the bush?

Pvt. Kasereka-Kasivire Heritier, a baby-faced but boastful 21-year-old, said civilians have nothing to fear when he deploys.

"I'm fit for war," said Heritier, who was first tested in battle as a 13-year-old child soldier fighting as a rebel in Congo's violent northeast. "Our job is to protect."