Atheists groups find doors open to them at service academies 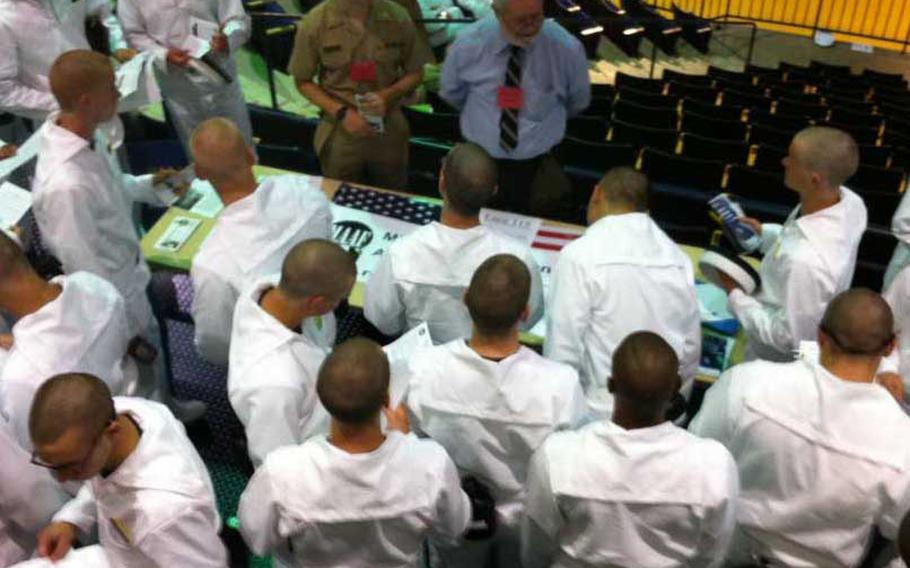 WASHINGTON &mdash; As atheist groups push for parity with religious groups throughout much of U.S. military, they point to the service academies as one setting where they&rsquo;re achieving their aims.

This summer, each academy is sponsoring groups for incoming students who are nonbelievers, alongside the traditional religious groups that have long operated at the academies.

At the U.S. Naval Academy&rsquo;s July religious assembly for incoming plebes, 45 members of the class of 2015 &mdash; about 4 percent &mdash; signed up with the Naval Academy Agnostics, Freethinkers and Atheists group, or NAAFA. Organizers say similar numbers of students joined atheist groups at the Air Force Academy and at West Point.

&ldquo;The academies have worked it out,&rdquo; said Jason Torpy, leader of the Military Association of Atheists and Freethinkers, a Washington-based organization pushing the Pentagon to name atheist chaplains and religious leaders. &ldquo;They are opening their doors with these summer programs. I haven&rsquo;t gotten that response in the rest of the force though.&rdquo;

At the Naval Academy, Lt. Cmdr. Seth Phillips, a Jewish chaplain and rabbi, agreed to help NAAFA establish itself. Helping people who believe differently to live out their beliefs is a standard chaplain duty, he said. But philosophical guidance, he added, has come from Torpy and several members of an Annapolis Unitarian church who reject the notion of divinity.

&ldquo;The group is no different than any other student group with connections to the outside world,&rdquo; Phillips said. &ldquo;The Baptists are supported by the Baptist Student Union, and some other Christian groups get support from the Navigators. In no way is this group unique, different or specially privileged.&rdquo;

The group was started by Naval Academy upperclassmen. One of them, Midshipmen 1st Class Cameron Thornberry, said that when the group gets rolling as its ranks are swelled by upperclassmen in the fall, it will address many of the questions religious groups do, only from a naturalistic rather than theistic perspective.

&ldquo;My highest aspiration for this group is to create a long-term and tight-knit community of nontheists at USNA who can relate comfortably to each other and enjoy developing morally and intellectually, while simultaneously giving back to the community at the same time,&rdquo; he said.