Are we finished in the Philippines? 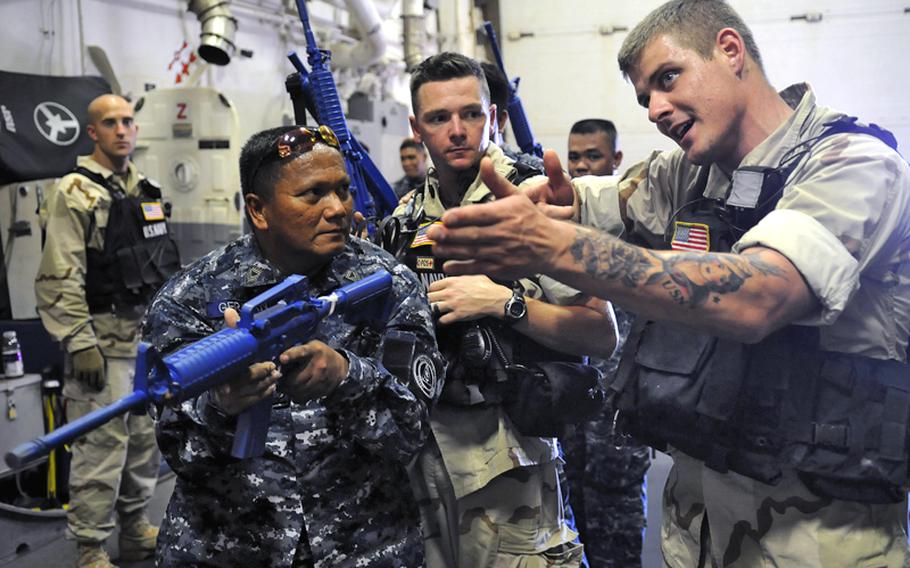 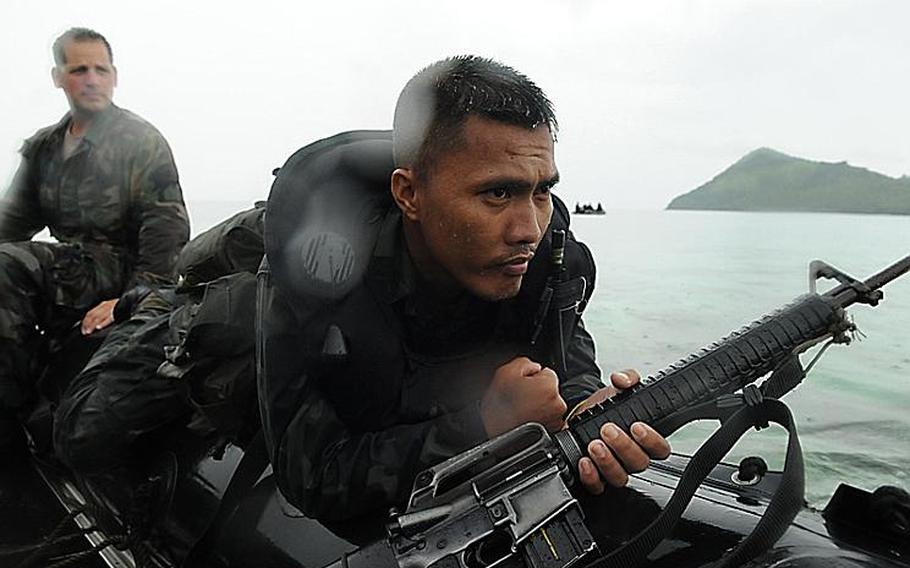 A Philippine scout swimmer from Marine Battalion Landing Team (MBLT) 3 prepares to "casts off" of the side of a speeding zodiac inflatable craft during maritime operations exercises with members of Joint Special Operations Task Force - Philippines (JSOTF-P). MBLT 3 and JSOTF-P participated in the exercise as the culmination of a joint program of instruction in tactical maritime operations. (Terrence Siren/U.S. Navy) 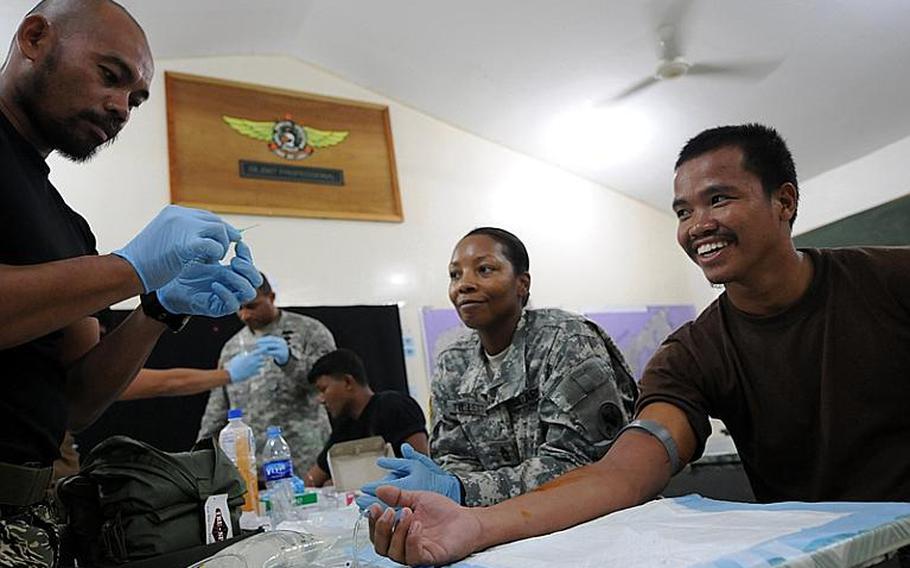 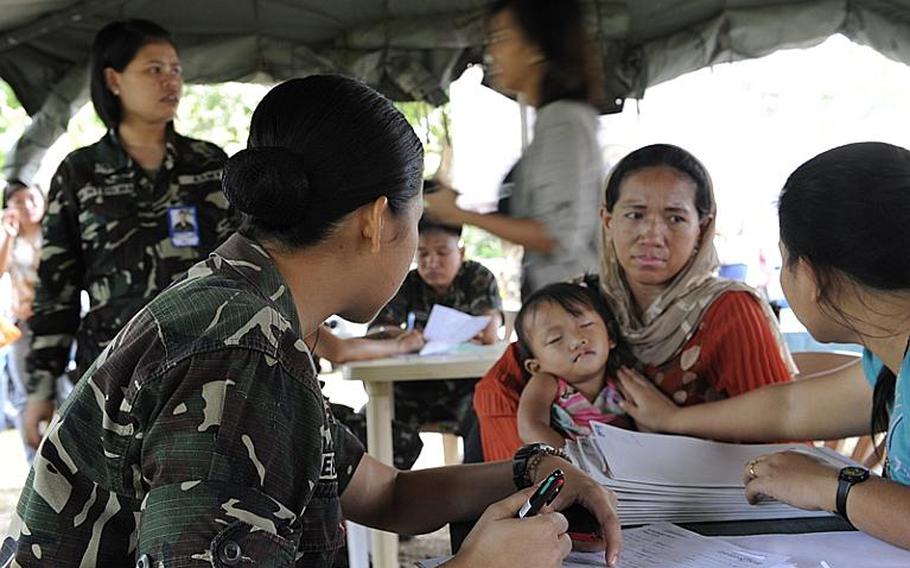 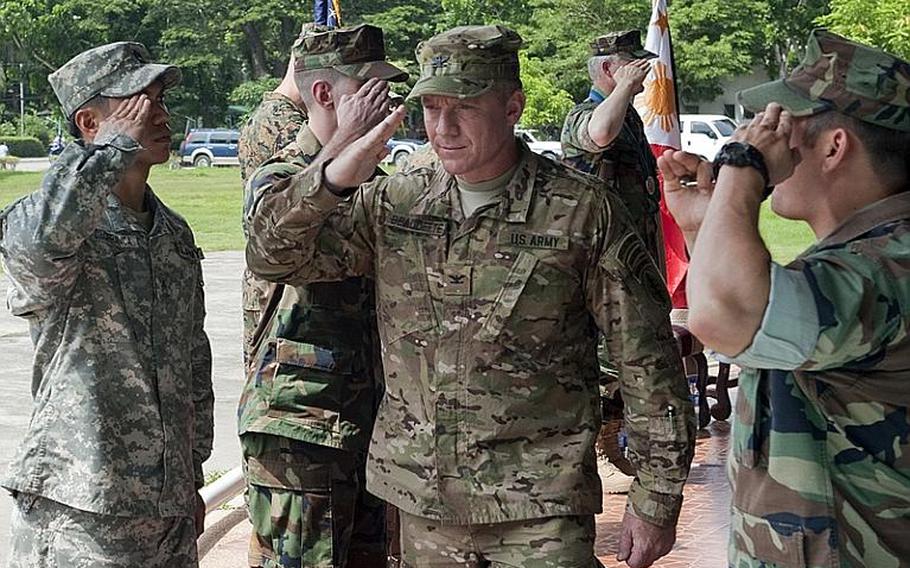 CAMP FOSTER, Okinawa &mdash; U.S.-backed Philippine marines swept through the jungles of Sulu on a pre-dawn scouting mission in late July and came upon a camp of kidnappers, terrorists and bandits.

After a deadly five-hour firefight, the marines took the hideout, U.S. special operations forces treated casualties and a terrorist leader with a $1 million U.S. bounty on his head fled back into the green wilderness.

That game of cat-and-mouse has played out for nearly a decade in the southern Philippines, where the United States opened a front in the war against terrorism shortly after the attacks on Sept. 11, 2001.

The U.S. has spent hundreds of millions of dollars and 17 servicemembers have died in the effort to root out al-Qaida-linked terrorism networks in a violence-plagued region that has vexed Manila for decades.

Now, military leaders and experts say the assistance operations have been widely successful in eliminating the threat of international terrorism. But the way out of the fight remains unclear.

With Osama bin Laden dead, the Iraq War wrapping up and a drawdown looming in Afghanistan, the U.S. commitment in the southern Philippines remains open-ended and the country&rsquo;s independence from military aid appears as elusive as terrorist rebels who disappear into the Sulu jungle.

&ldquo;We have been invited to stay here, and we will stay in support of their efforts as long as we are needed,&rdquo; said Col. Fran Beaudette, commander of Joint Special Operations Task Force-Philippines.

The U.S. policy is to continue the anti-terrorism operations and assistance for as long as the Philippines requests, U.S. Ambassador to the Philippines Harry Thomas said in a prepared statement to Stars and Stripes.

A task force of 500 to 600 U.S. special operators has been working with a $50 million annual budget &mdash; a tiny figure compared to the multibillion-dollar operations rolled out in Afghanistan &mdash; to help the Philippines&rsquo; anti-terror effort since the two countries signed a security treaty in the months after the Sept. 11 attacks.

The task force said it has also funneled $24 million into more than 200 humanitarian projects in the region since 2007, an effort that mirrors counterinsurgency tactics in Iraq and Afghanistan.

&ldquo;It is just a matter of time before the remnant of these groups, which are shells of their former selves, are completely eliminated, their safe havens are eliminated and they are gone forever from the region,&rdquo; Beaudette said.

Estimates put the total number of fighters at no more than a few hundred, but only about a dozen high-profile targets remain in the southern Philippines, according to Maria Ressa, a journalist who specializes in Southeast Asia terrorism and an author-in-residence at the International Centre for Political Violence and Terrorism Research in Singapore.

A decade ago, the al-Qaida-linked Jemaah Islamiyah and Abu Sayyaf were carrying out sophisticated domestic and international terror attacks while operating bomb-making training camps in Mindanao, a southern province with islands near the border of Malaysia and Indonesia.

Jemaah Islamiyah members who ran camps in the Philippines built a bomb in 2002 that blew apart a Bali, Indonesia, nightclub and killed more than 200 people, including many Australian tourists.

But those threats of international terrorism, which have driven U.S. foreign policy for the past decade, have evaporated in the Philippines, according to Lt. Gen. Raymundo Ferrer, chief of the West Mindanao Command of the Armed Forces of the Philippines.

&ldquo;The conditions in early 2000 when [Jemaah Islamiyah] had been giving logistical support to locally trained terrorists no longer exist,&rdquo; Ferrer said in an email to Stars and Stripes. &ldquo;In my opinion, the JI failed in training groups that can launch attacks outside the Philippines.&rdquo;

The danger, however, is not gone for Filipinos or the country&rsquo;s military.

Jemaah Islamiyah&rsquo;s leader, a U.S.-educated Malaysian engineer known as Marwan, is the most wanted terrorist in the Philippines and remains on the run despite a $5 million U.S. bounty.

Abu Sayyaf killed seven Philippine marines and wounded 23 during the clash in July. The group&rsquo;s leader, Radullan Sahiron, who has a $1 million U.S. bounty, is believed to have escaped the attack, according to Lt. Col. Randolph Cabangbang, spokesman for West Mindanao Command.

Meanwhile, a steady procession of military clashes, bombing attempts and kidnappings has continued unabated despite the efforts by both nations.

It has left the U.S. in a familiar position. Years of effort and millions of dollars have gone into supporting and training local forces that have made strides against terrorist groups but are not yet able to stand on their own.

In Afghanistan, hundreds of thousands of police and troops have been trained by the U.S. and NATO allies in recent years, but the country is still incapable of taking over security operations. Similar training efforts in Iraq have left a modest police force struggling to protect a country that is still rocked by terrorism.

Ferrer said the Philippine military could continue the fight alone if the U.S. was to ever walk away, but advanced U.S. hardware and humanitarian aid is key to eliminating terrorist groups &mdash; and ensuring the conflict does not again produce international terror attacks, he said.

&ldquo;I believe that for as long as we do not possess the technology to fight terrorism, U.S. assistance in the Philippines&rsquo; participation on the global war against terrorism is needed,&rdquo; Ferrer said.

The assistance to the Philippines has been a bargain by U.S. military standards, but lately the U.S. government and the Pentagon have been rocked by a stubborn economic recession and deep concerns over deficits and spending.

Bedrock military programs such as retirement benefits and major projects like the plan for an historic realignment of U.S. forces in the Pacific have been eyed for budget cuts this year.

Rohan Gunaratna, head of the International Centre for Political Violence and Terrorism Research in Singapore, said the United States cannot afford to end its operations in the Philippines.

&ldquo;What is crucial for us to understand is the security situation has vastly improved in the southern Philippines, and that improvement is largely from the collaboration between the U.S. and the Armed Forces of the Philippines,&rdquo; Gunaratna said. &ldquo;If the U.S. was to withdraw, it is going to reverse the situation.&rdquo;

Jemaah Islamiyah is still interested in international terrorism and could regroup, he said.

Umar Patek, a Bali bomber and member of the terror group who hid in the Philippines until 2009, was arrested in January in Abbottabad, Pakistan, with his Filipino wife just months before bin Laden was killed there, Gunaratna said.

&ldquo;His intention was to go and fight in Afghanistan, so the connection is there,&rdquo; he said.

But Zach Abuza, a professor at the National War College and an expert on Philippines terrorism, said it might be time for the U.S. to re-examine its open-ended assistance.

&ldquo;I personally think it is time to draw down. I&rsquo;ve been saying this for a long time,&rdquo; Abuza said. &ldquo;I&rsquo;m not against what the Americans are doing there. I think they have done a very good job with a limited budget and a very small footprint.&rdquo;

But the Department of Defense has indicated it will stay in the country indefinitely and has not put pressure on the Philippine military and government to take over security operations, he said.

&ldquo;The goal &hellip; is to train the Filipinos to start to do this themselves,&rdquo; Abuza said. &ldquo;I&rsquo;m not convinced that the training we have given has jelled.&rdquo;

Individual marines pulled out for U.S. training do not pass along the experience when they return to their original units, he said.

The Philippine government should complete a performance review of its security operations with the U.S. to gauge how much progress has been made, said Philippine Sen. Gregorio &ldquo;Gringo&rdquo; Honasan, vice chair of the senate&rsquo;s National Defense and Security Committee.

The review would likely find that the U.S. has not done enough and that &ldquo;the potential of these joint operations has not been exploited to the fullest,&rdquo; Honasan said.

The U.S. should increase foreign aid and share weapons technology, including unmanned drones, he said.

&ldquo;In terms of technical support, it is not enough to show us this equipment or educate us on how to use this equipment&rdquo;; the country must acquire the technology, Honasan said.

Meanwhile, a hasty drawdown from the country could have dangerous consequences, Honasan said.

&ldquo;If this is done prematurely, there will be a cost to that decision,&rdquo; he said. &ldquo;It is not only the Philippines who will suffer and feel the effects. &hellip; If we are deprived prematurely of the U.S. assistance, there will be an effect on the global effort against terrorism.&rdquo;