A Stars and Stripes reporter recounts the terror of an IED 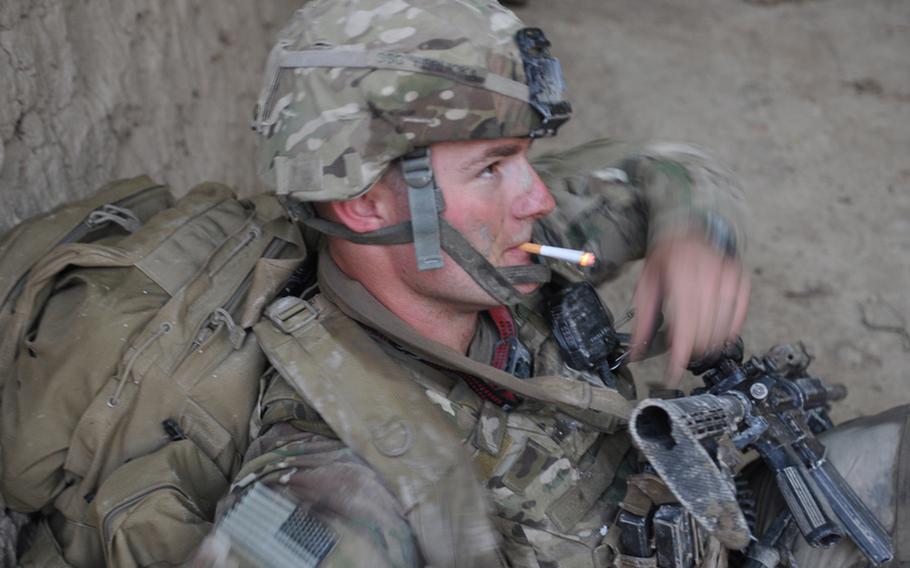 Staff Sgt. Cody Ferlicka stops for a smoke break outside the village of Salim Aka, in Kandahar province shortly before a bomb tore through a group of U.S. and Afghan soldiers, killing one American and two Afghans. (Heath Druzin/Stars and Stripes)

Staff Sgt. Cody Ferlicka stops for a smoke break outside the village of Salim Aka, in Kandahar province shortly before a bomb tore through a group of U.S. and Afghan soldiers, killing one American and two Afghans. (Heath Druzin/Stars and Stripes) 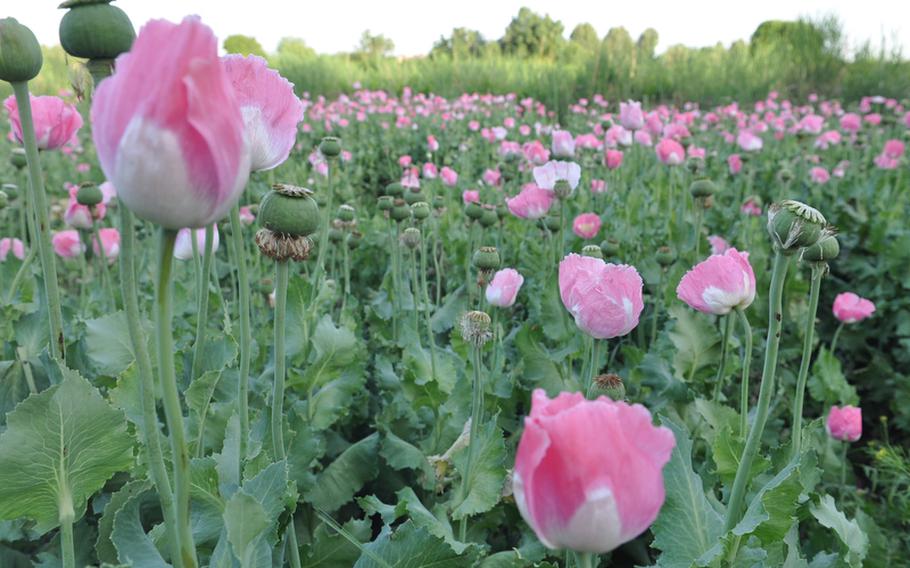 A poppy field near the village of Salim Aka in Kandahar province, about 100 yards from where a bomb killed three soldiers on April 25. Wednesday marked the first time U.S. soldiers had been to the area, a Taliban stronghold rich in poppies, since September. (Heath Druzin/Stars and Stripes) 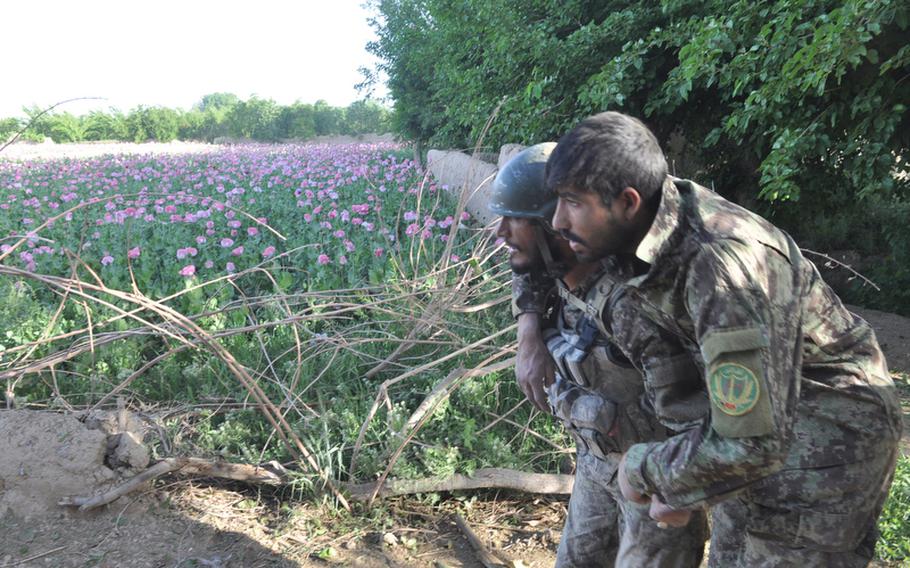 Afghan soldiers help a comrade injured in an April 25 blast in Kandahar province&#39;s Zhari district. One U.S. soldier and two Afghan soldiers were killed in the blast. (Heath Druzin/Stars and Stripes) 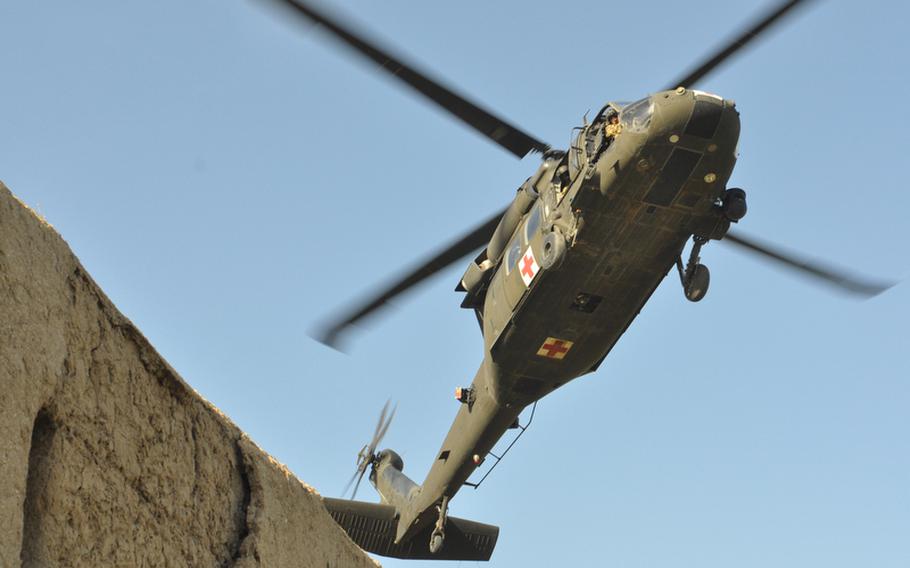 A MEDEVAC helicopter arrives to pick up soldiers wounded in a bomb blast April 25 in the village of Salim Aka in Kandahar province. Three soldiers were killed in the blast. (Heath Druzin/Stars and Stripes) 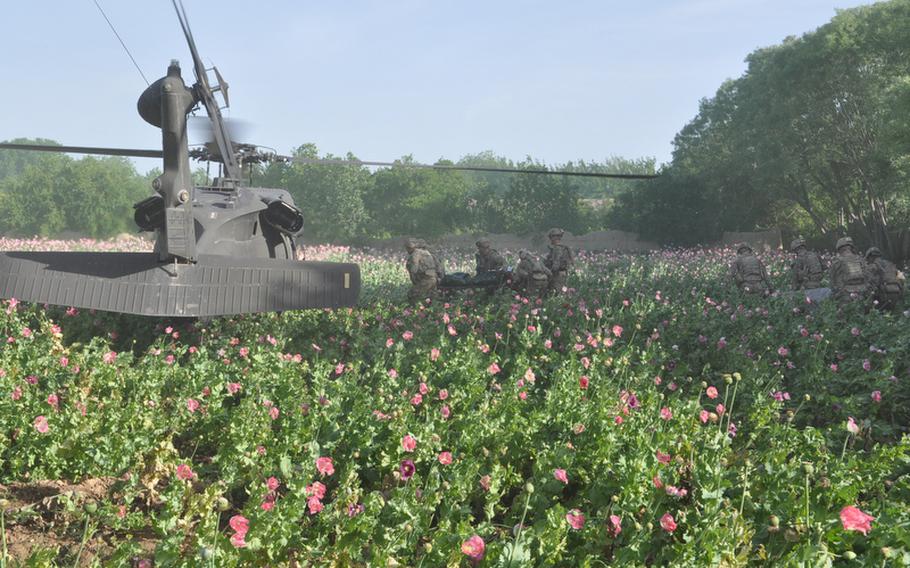 A MEDEVAC helicopter lands in a poppy field and awaits soldiers wounded in a bomb blast April 25 in the village of Salim Aka in Kandahar province. Three soldiers were killed in the blast. (Heath Druzin/Stars and Stripes) 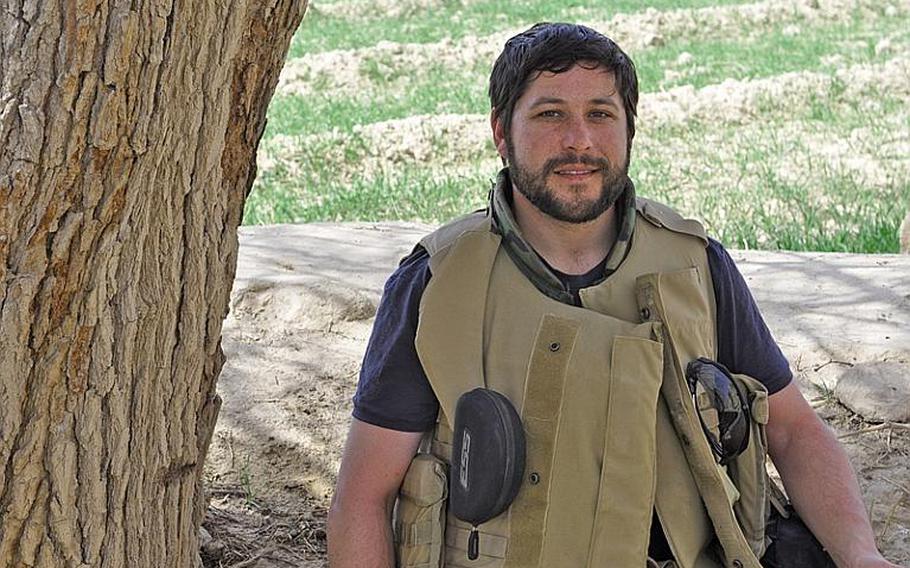 SALIM AKA, Afghanistan &mdash; One step can shatter a still, cool morning. It can reverberate through a platoon, across continents, over an ocean. One step can mean mourning deferred on the battlefield and mourning to come for those asleep half a world away, unaware that nothing will ever be the same.

Salim Aka was supposed to be a rough neighborhood, a poppy-rich Taliban stronghold that insurgents were expected to fight hard to keep control of. The 82nd Airborne soldiers of Battle Company, 3rd Platoon were the first soldiers in the area in seven months as part of a massive spring operation across Kandahar province&rsquo;s troublesome Zhari district aimed at disrupting insurgents as they dig in for the summer fighting season.

It&rsquo;s where the &ldquo;bogeyman&rdquo; lives, as one officer put it, and that bogeyman so often comes in the form of buried explosives, nearly impossible to spot, maiming and killing without warning. Every step is fraught.

As the sun rose over picturesque pink-white carpets of poppy and the patrol reached the outskirts of the village on April 25, we saw no one. Not a single villager, let alone fighter, in nearly five hours of slogging through boot-sucking mud and waist-deep canals. Charcoal in the fire rings of mud wall compounds, fields well tended, but no people, just empty grape huts and eerie quiet.

There were about 30 Americans with a platoon of Afghans setting up positions on two mud-wall compounds, pulling over to watch for another unit heading farther into the village.

After the wet, chilly, pre-dawn journey in which many soldiers laboring under hundred-pound rucksacks slipped into the dark water of irrigation canals, some troops were taking a moment to sit, smoke a cigarette and dry off in the mid-morning sun, leaning against the outside of a medieval-looking grape hut, peering over a field of poppies in full bloom.

At an intersection of dusty village paths, some soldiers pulled security, while others discussed the next move. It was a peaceful, sunny afternoon alive with chirping birds. An Afghan minesweeper was intently scrutinizing a tree 10 feet from me, the beepity-beep of his detector indicating a hit. He stepped forward then back, forward, back.

A sickening weight settled in the pit of my stomach as I was thrown to the ground. Would I die, be maimed? My mind raced.

The boom elongated, sounding a long, deep croak before fading underwater into the gurgle and shrill ring of temporary deafness. As I lifted my head off the ground I saw nothing but dust and wisps of blackened debris floating to the ground.

My first thought was, &ldquo;What&rsquo;s missing?&rdquo; and I gave myself a frantic patdown. Everything was intact; the blood on my pants was not my own. I was unscathed but for an aching head, muddied thoughts and paralyzing fear.

Four others were not as lucky.

Shouts of &ldquo;Medic! Medic!&rdquo; were muffled by the ringing in my ears. Everything slowed down, even as soldiers frantically sprinted to the site of the explosion.

Afghan soldiers carried the top half of one of their comrades on a stretcher, running him into a compound to cover his remains, a look of surprise frozen on his face, lifeless eyes wide open staring into mine.

The Afghan minesweeper simply vanished. One moment he was checking the tree, the next the dust cleared and he was gone. No one found a trace of him.

After a survey of the bloody toll moments after the blast, there was a hopeful shout.

An American GI had been thrown 10 feet from the crater into a thicket of bushes next to the poppy field, badly wounded but still breathing.

One American, himself bloodied from the blast, immediately jumped in, tilting the soldier&rsquo;s head back to open his airway as the wounded man&rsquo;s chest heaved. No one had checked the thicket for bombs and, while I sat terrified to take another step, lest I step on a second bomb, two medics and several other soldiers rushed forward without hesitation to save their buddy&rsquo;s life.

His left arm torn, his faced burned and bloodied, the injured soldier was struggling to breathe and the medics went to work to make an incision in his neck.

&ldquo;Keep breathing, keep breathing,&rdquo; one of the soldiers shouted, urging his wounded comrade to fight for his life.

As the first Black Hawk helicopter flew low over the compound, flower bulbs and grit pelted the soldiers standing watch over the landing zone, a small square of poppies between low mud walls.

Soldiers rushed through the fierce rotor wash, carrying the wounded man on a stretcher. Seconds after he was loaded, the chopper was gone, leaving a grim silence; dozens of soldiers quietly hurting. Chaos busies the mind, at least, and keeps dark thoughts at bay.

The wounded soldier survived, transferred to a hospital in the United States. Pentagon officials, citing privacy concerns, declined to release his identity.

Staring at the four-foot deep hole in the ground that I had been standing steps away from at the time of the blast felt like peering into eternity. I had walked over that spot just moments before.

Visions of my grieving parents and friends flooded into my mind &mdash; all the people I would have hurt had I taken a few steps forward at the wrong moment.

Frontline soldiers experience this possibility every day in Afghanistan. For them, death is not an abstract concept. They understand life depends on inches and random chance. They struggle with why they made it and their friend did not. If the jug of fertilizer leans one direction, you live. If it leans another, everything goes dark.

&ldquo;Mild traumatic brain injury,&rdquo; the doctor said later, after I failed a series of cognitive tests. It&rsquo;s the kind of bizarre, paradoxical term only the military could invent.

Now, weeks later, it means I nearly jump out of my chair when a door slams, wander off into my own world occasionally and fret over how long it will last. Every soldier in that platoon, though, lost a brother. Their Afghan counterparts lost two. One American was left fighting for his life.

I got to fly back to Kandahar Air Field on an Air Force medevac chopper and return home. Alpha platoon kept fighting.

On the battlefield, the work doesn&rsquo;t stop, even after comrades meet violent death. Mourning has to wait.

As he looked at the stunned faces of his platoon mates a few minutes after the explosion, Staff Sgt. Cody Ferlicka urged the soldiers to stay vigilant.

Heath Druzin, 31, is on his second stint as a war correspondent for Stars and Stripes. He has spent 2&frac12; years covering the wars in Iraq and Afghanistan, as well as military issues around the Middle East and Central Asia.

CorrectionThe soldiers in this story were incorrectly identified as members of Alpha Platoon. They are members of the 82nd Airborne's Battle Company, 3rd Platoon.