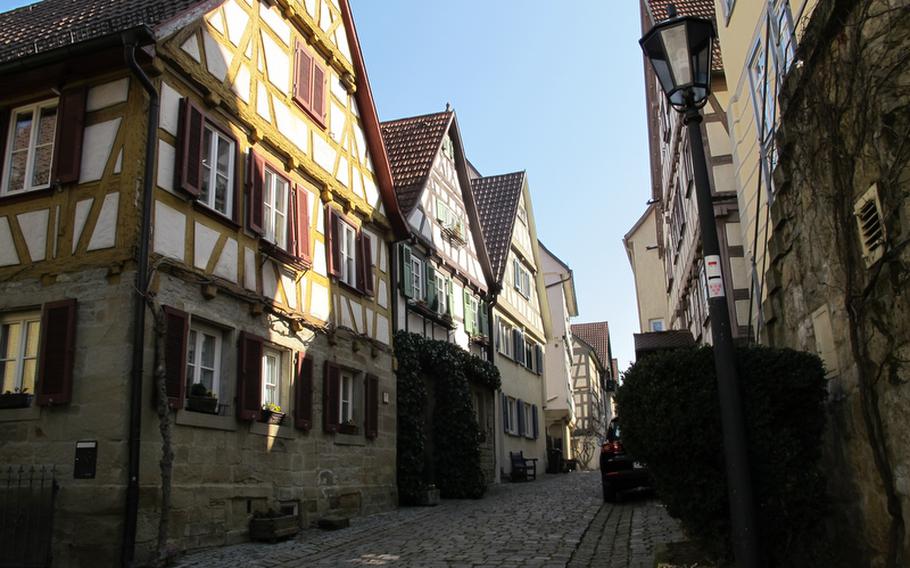 Buy Photo
In Marbach, Mittlere Holdergasse is an interesting side street to wander. The narrow street is lined with old houses and small arts-and-crafts shops. (John Vandiver/Stars and Stripes)

Buy Photo
In Marbach, Mittlere Holdergasse is an interesting side street to wander. The narrow street is lined with old houses and small arts-and-crafts shops. (John Vandiver/Stars and Stripes) 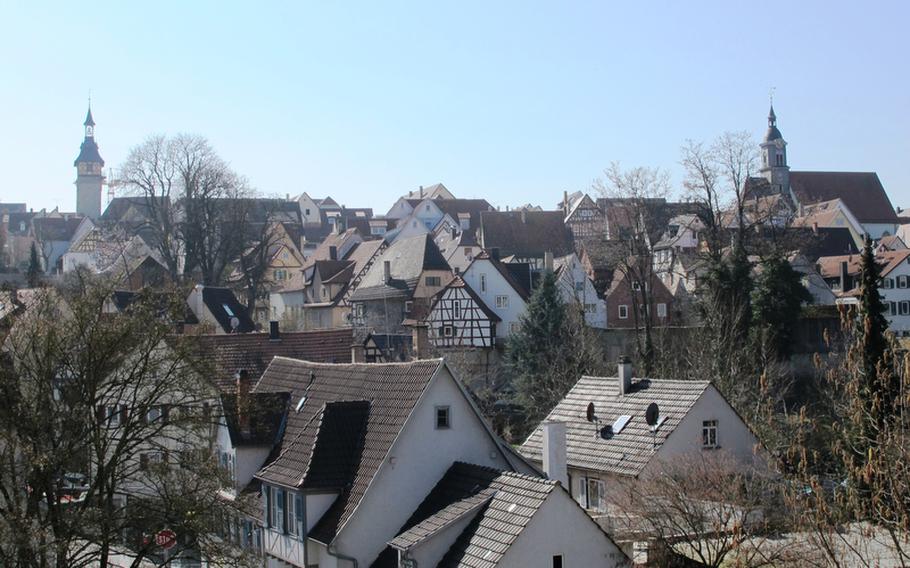 Buy Photo
A view of Marbach, Germany's old town district, with its many well-preserved medieval structures. In the distance, at left is the city's east gate tower. (John Vandiver/Stars and Stripes) Buy Photo
The Alexanderkirche, the oldest church in Marbach, Germany, was built in the 15th century. The gothic cathedral is in excellent condition and its location offers a good view of the town. (John Vandiver/Stars and Stripes) Buy Photo
Along Marbach’s Mittlere Holdergasse, there are several small hole-in-the-wall shops worth perusing. There are plenty of local arts and crafts for the window shopper to investigate. (John Vandiver/Stars and Stripes) 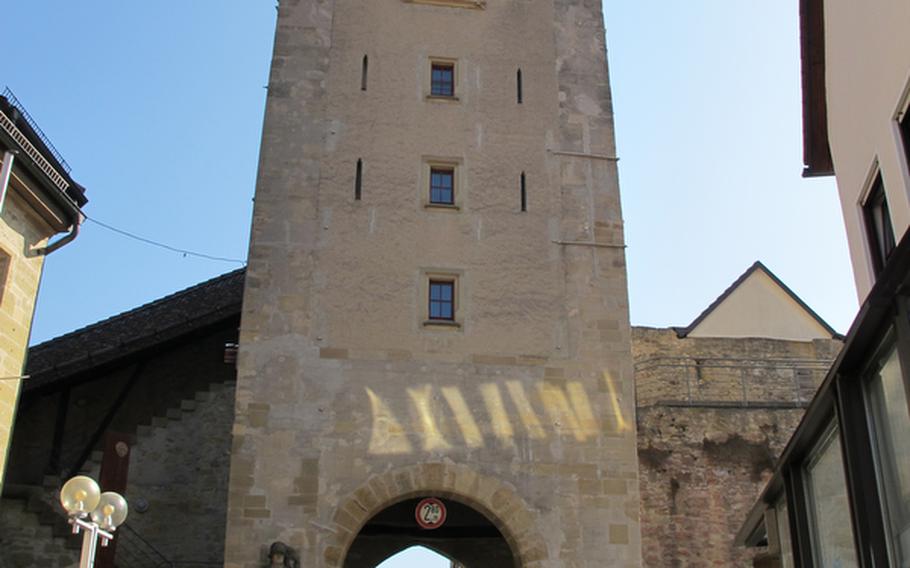 Buy Photo
In Marbach, one original city gate tower still stands. The tower serves as the eastside entrance to the oldest part of town, known as the castle square. (John Vandiver/Stars and Stripes) It&rsquo;s not as frequented as some of Baden-W&uuml;rttemberg&rsquo;s other medieval villages and big-city destinations, but Marbach am Neckar has a charm all its own.

Yet, this small town perched above the Neckar River seems to be a place that&rsquo;s all-too-often overlooked. Perhaps it is overshadowed by big cities such as Stuttgart, Ludwigsburg and Heidelberg. And when it comes to luring Americans in search of the typical toy town experience, the university city of T&uuml;bingen is usually the main attraction.

Still, for all the merits of those places, Marbach deserves a little love, too. It is well worth a visit for anyone interested in a casual stroll amid old houses, churches and interesting side streets. They all add up to making Marbach one of Germany&rsquo;s most picturesque towns.

Founded in the late 12th century, Marbach is best known as the birth place of the poet and dramatist Friedrich Schiller, whose childhood home still stands on one of the main streets running through Marbach&rsquo;s old town.

It seems the literary connection has caused the city fathers to carve out a niche for Marbach as a destination for bookworms. Though it is home to only 15,000 people, Marbach hosts the Schiller National Museum, the German Literature Archive and the Museum of Modern Literature, which boasts manuscripts from the likes of Franz Kafka and Hermann Hesse.

However, during a recent visit to Marbach, I passed on all that literary history. I was more interested in taking in the atmosphere of the charming old town.

Though Schiller&rsquo;s name pops up on signs all over the place, I couldn&rsquo;t name a single work authored by the old German master and wasn&rsquo;t up for a history lesson. Still, I found his childhood home noteworthy, and not because I had any interest in the long-dead author.

For me, what was remarkable about the house is that it looks just like any other home in Marbach. Rather than serving as some well-preserved monument that stands out because of its oldness, this old house blends right in with all the other little half-timbered homes that line Marbach&rsquo;s streets. That&rsquo;s how well preserved the town is, having escaped the attention of Allied bombers during World War II. It&rsquo;s also what makes it worth visiting.

The quirkiest street in town is Mittlere Holdergasse, where there&rsquo;s a long line of old stylebuildings, some of which appear to be residences. Others serve as little arts-and-crafts shops, selling everything from cuckoo clocks to jewelry.

The oldest part of town is the castle square, where one gate tower still stands as an east-side entrance to the old town, or Altstadt.

Alexanderkirche, the oldest church in town, also is worth a visit. Built in 1450, the gothic cathedral is in excellent condition and its location offers a good view of the old city.

But for me, the best way to spend the day in Marbach is simply walking the streets, exploring its alleyways and enjoying the medieval vibe.

Costs: Entrance to the museum costs 7 euros or 15 euros for a family.

Food: There are plenty of restaurants and cafes to choose from, offering everything from traditional Swabian cuisine to pizza.

Information:Several tourist information stands offer free maps and brochures, but they are all in German. The town website offers some information in English: schillerstadt-marbach.de. More information on the museum can be found at: dla-marbach.de, in German.