Bury St. Edmunds: Local brew for what ales you Maureen Swindles, a tour guide for the Greene King Brewing Co., points out various points of interest on the brewery grounds and the surrounding town of the Bury St. Edmunds, from atop the brewery building. (David Hodge/Stars and Stripes)

Maureen Swindles, a tour guide for the Greene King Brewing Co., points out various points of interest on the brewery grounds and the surrounding town of the Bury St. Edmunds, from atop the brewery building. (David Hodge/Stars and Stripes) 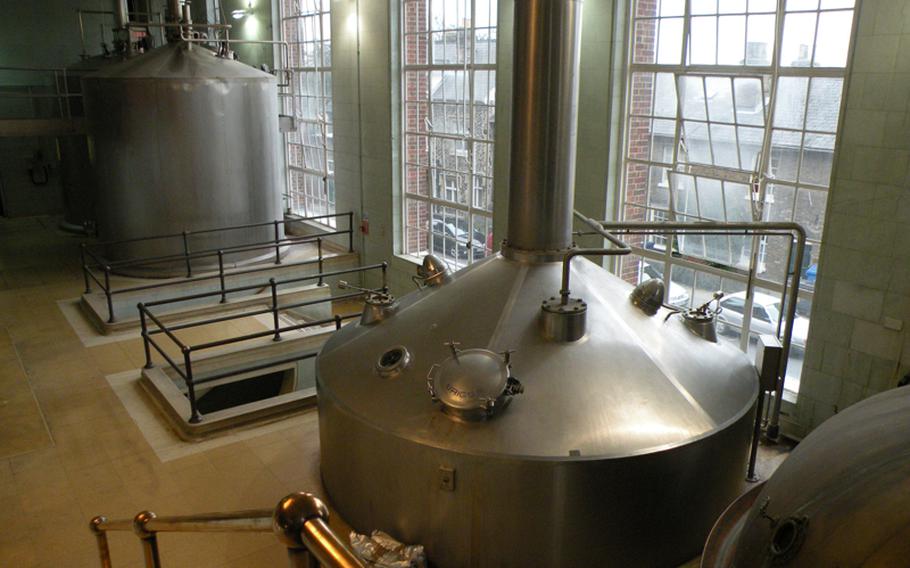 Large stainless steel and copper mash tuns inside the Greene King brewery in Bury St. Edmunds, England, are used as part of the brewing process for ales. (David Hodge/Stars and Stripes) 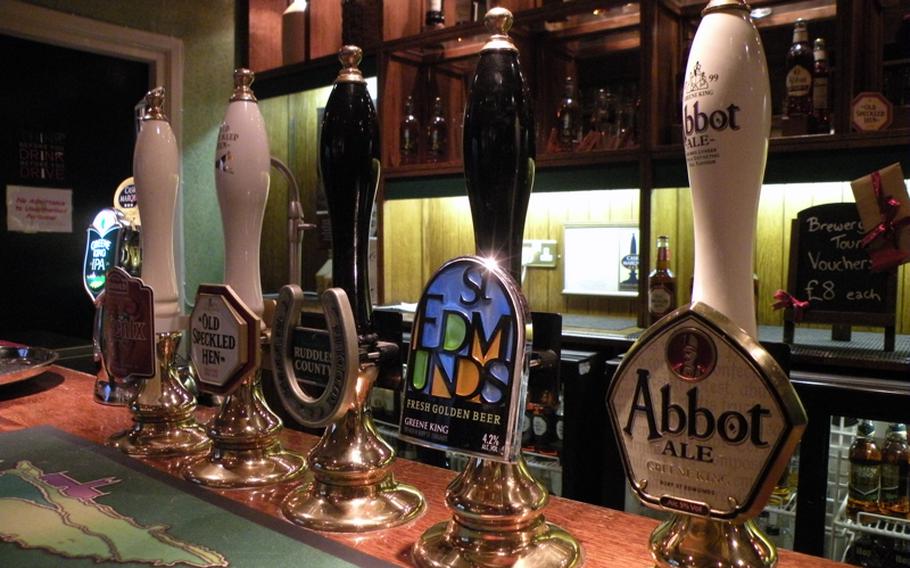 Different varieties of Greene King brews are on tap at the brewery's tasting room at the end of the tour of the Greene King Brewing House. (David Hodge/Stars and Stripes) A view inside a large copper tank at the Greene King Brewing Co. in Bury St. Edmunds, shows how barley grist is mixed with hot water to create mash. The liquid is then drained away, at which point it&#39;s called sweet wort. (David Hodge/Stars and Stripes) 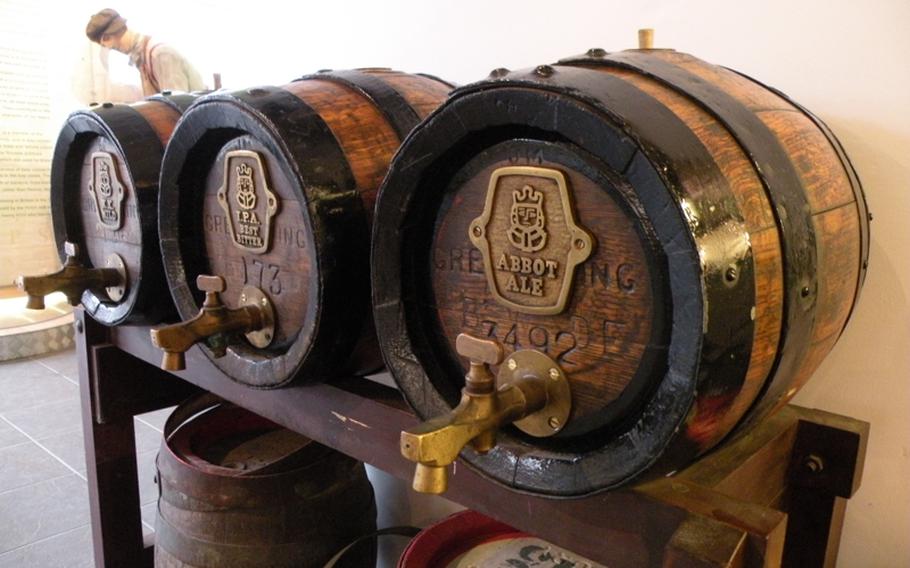 Three old casks are on display in the museum at the Greene King Brewing Co. in Bury St. Edmunds, England. A tour of the brewery shows the process and ingredients used in creating many of the company's ales. (David Hodge/Stars and Stripes) 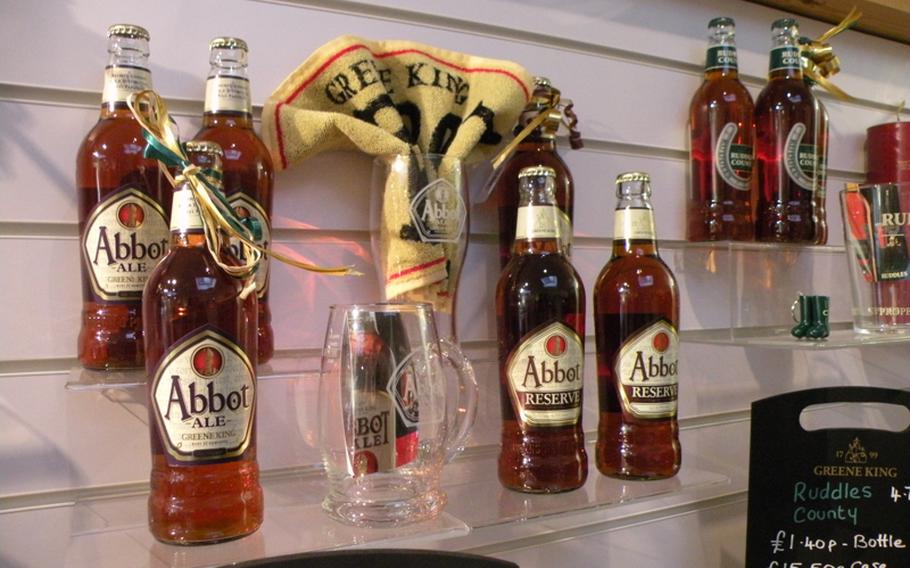 From atop the New Brew House at the Greene King Brewing Co. in Bury St. Edmunds, England, you can see most of the 44-acre site and the surrounding downtown area.

As my tour guide pointed to various points of interest, she recited the area&rsquo;s historical connection with ale, which dates to 1086.

Everyone, even children, consumed the beverage back then, Maureen Swindles said. She explained that the water in the area was undrinkable and the process of brewing ale created a drinkable liquid.

Interesting facts like these along with wonderful sights and tasty beverages are all a part of the guided tour at the Greene King brewery. The hourlong tour includes a trip through the seven-story brew house, a visit to the on-site museum and a tantalizing tasting session.

&ldquo;It really is a beautiful little brew house,&rdquo; Swindles said of the New Brew House &mdash; which isn&rsquo;t all that new, having been built in 1938.

Before the tour, visitors can stroll through the small adjacent museum and find out what a &ldquo;firkin&rdquo; is and discover the story about the company&rsquo;s founders, Benjamin Greene and Frederick King. The two brewers were competitors at one time and joined forces in 1887.

Today Greene King employs about 750 people at the brewery and owns about 1,500 pubs across Britain, according to Swindles. The site also produces roughly 3 million pints of brew during a five-day workweek.

Swindles explained the role of the four ingredients used in ale &mdash; barley, hops, water and yeast &mdash; during the tour. She offered samples of the barley, which was surprisingly good to eat by itself.

As we ascended all the way to the roof and then descended five floors of the brewery, passing huge copper mash tuns exuding the bold smell of boiling grains during the fermentation process, Swindles explained how the barley, water and hops are transformed and then transported into large maturation vats capable of holding more than 230,000 pints.

A tasting session offers tour-goers many of the beers the brewery makes. I tasted several kinds and liked its Very Special India Pale Ale the best. Greene King offers many brands of ales plus regular seasonal brews throughout the year.

The head brewer, John Bexon, stopped by to chat and share some of his expertise with me, including the proper way to taste the flavor of beer by letting the liquid roll over all four areas of the tongue so you can taste bitter, sour, sweet and salty.

Bexon, who has been a brewer since 1977, also said many Americans drink their beer as cold as possible. He recommends drinking ale at a warmer temperature, about 55 degrees Fahrenheit, to experience its true taste.

The tour ends in the visitor center&rsquo;s gift shop, where you can purchase all kinds of Greene King collectibles, gift sets and brews. Some of the brews can be hard to find on the economy, so Swindles suggests purchasing from the visitor center.