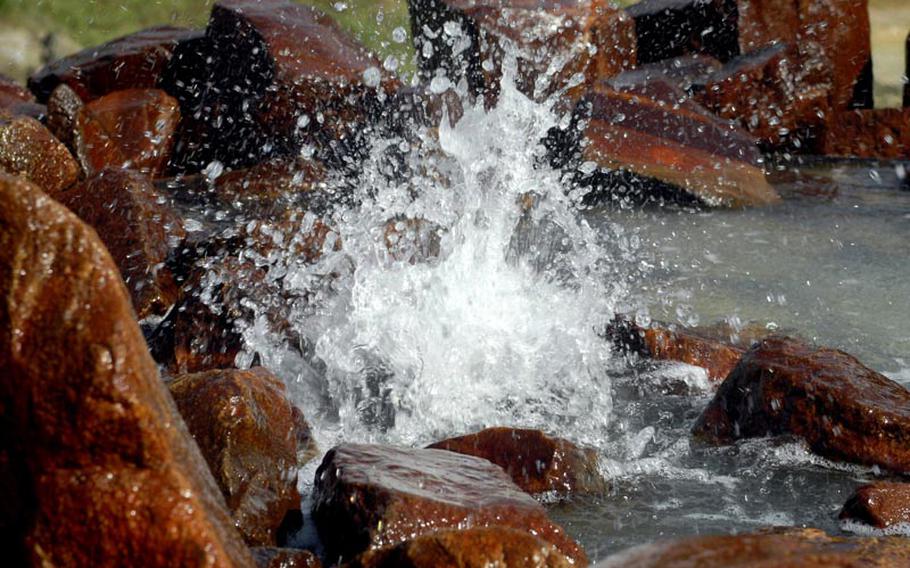 Buy Photo
Eruption of the Geyser Andernach concludes in spits and splatters on the Namedyer Werth peninsula near Andernach, Germany. Guinness World Records lists it as the world&#39;s tallest cold-water geyser, spewing nearly 200 feet into the air about every two hours. (Mark Patton/Stars and Stripes)

Buy Photo
Eruption of the Geyser Andernach concludes in spits and splatters on the Namedyer Werth peninsula near Andernach, Germany. Guinness World Records lists it as the world&#39;s tallest cold-water geyser, spewing nearly 200 feet into the air about every two hours. (Mark Patton/Stars and Stripes) 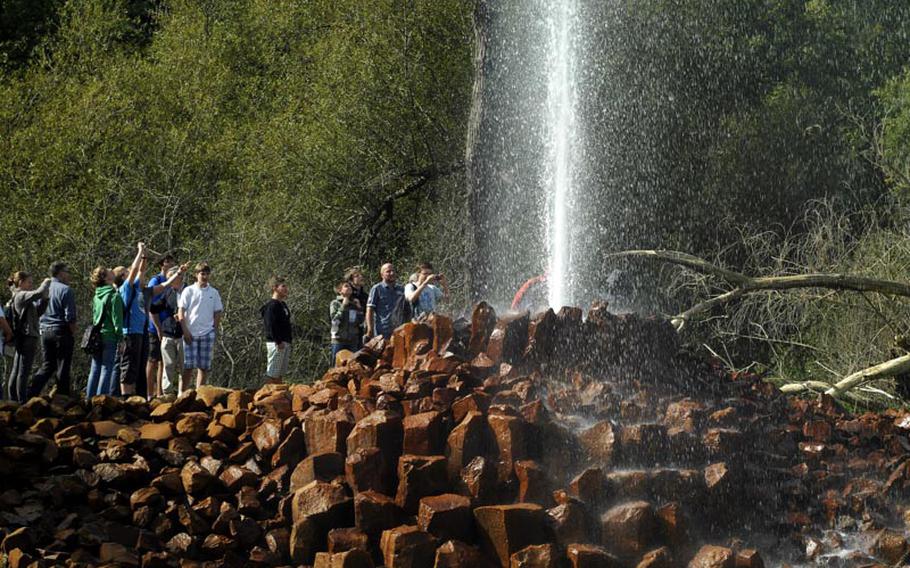 Buy Photo
Visitors take photos and gaze skyward as the Geyser Andernach erupts on the Rhine River&#39;s Namedyer Werth peninsula, about an hour and a half drive from Wiesbaden. (Mark Patton/Stars and Stripes) 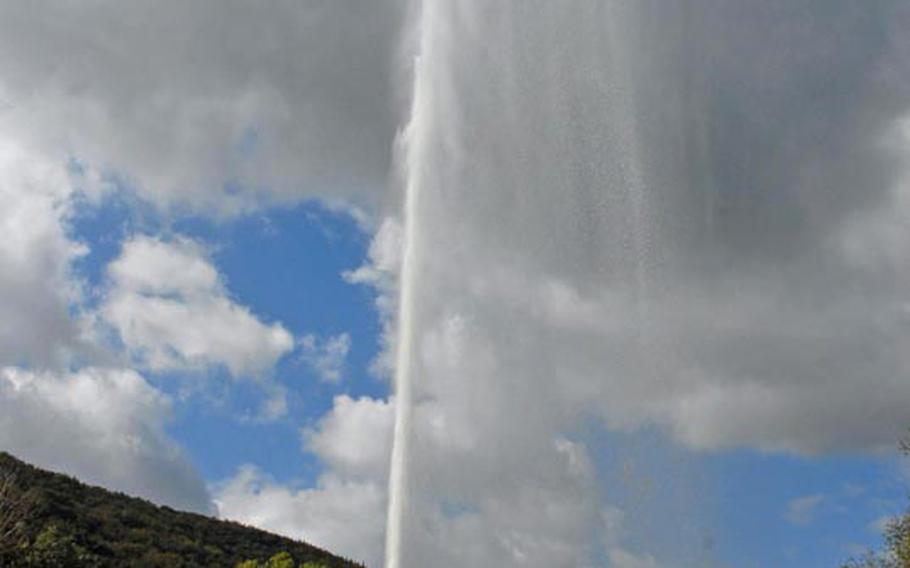 Buy Photo
The Geyser Andernach shoots into the air on the Rhine River&#39;s Namedyer Werth peninsula. The geyser is located on a nature reserve that is home to many endangered species of animals and plants. (Mark Patton/Stars and Stripes) 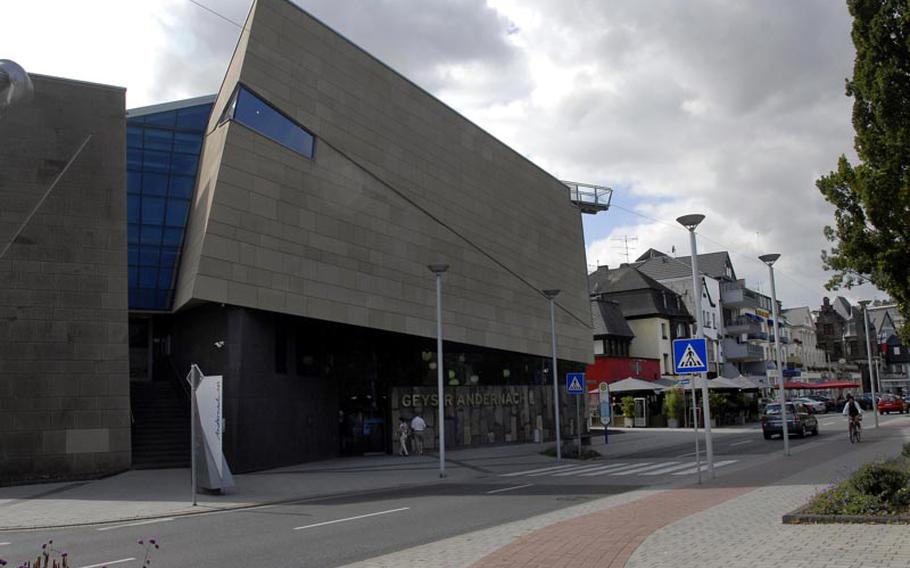 When most people think of geysers, Yellowstone National Park or Iceland usually come to mind, but Germany happens to be home to the world&rsquo;s tallest cold-water geyser, according to Guinness World Records.

The geyser near the town of Andernach, located on the Namedyer Werth peninsula, offers visitors the chance to witness one of nature&rsquo;s most interesting phenomena.

From April through the end of October, the geyser erupts about every two hours, but while the water spouts for six to eight minutes, the geyser&rsquo;s peak lasts just a few minutes.

What makes cold-water geysers erupt can be compared to the force generated by shaking a bottle of carbonated water. The process is similar to that of their more well-known hot-water counterparts, but instead of steam driving the eruption, carbon dioxide bubbles cause it.

All the senses are awakened while waiting for the main attraction to occur, from the cleansing, junglelike smell that envelops you, to the wildlife calling out from the surrounding woods. The Namedyer Werth, on the Rhine River, is a nature reserve, home to many endangered species of animals and plants.

When a loud hissing sound erupts, followed by violent gurgling noises, you know Mother Nature is ready to show off.

The geyser reaches peak height rather quickly. According to Stefanie Dietzler, manager of the geyser&rsquo;s vistor center, the spewing water reaches heights of about 130 feet to nearly 200 feet depending on the wind.

Straining my neck to take it all in, I was stunned by the beauty as the water at the top of the geyser merged seamlessly into the clouds.

You can get as close to the geyser as you feel comfortable. As it starts to subside, there&rsquo;s a good opportunity to glimpse what seems to defy logic: a tornadolike spout twirling from the still waters surrounding the geyser&rsquo;s base.

Because the nature reserve has been marred by vandalism in the past, visitors must take a structured tour to reach the peninsula and view the geyser. Fortunately, the tour is informative. It starts with a 60- to 90-minute visit of the Geyser Adventure Center in Andernach, where visitors &ldquo;accompany&rdquo; a carbon dioxide molecule on its journey from the magma up into the Earth&rsquo;s atmosphere. There are numerous exhibits, both visual and interactive, that make learning about the geyser fun for all ages.

From there, visitors take a 20-minute boat ride. The ride itself is impressive, with views of rolling hills and unusual architecture along the Rhine. It&rsquo;s only about a five-minute walk from the boat landing to the geyser, so, while sturdy hiking boots aren&rsquo;t necessary, it&rsquo;s advisable to wear shoes you don&rsquo;t mind getting wet.

In all, the tour of the center &mdash; which you don&rsquo;t have to take but I recommend &mdash; the boat ride and the geyser visit take about three hours combined. It&rsquo;s three hours filled with learning, beauty and being humbled by nature.

DirectionsGPS address for the Geyser Discovery Center is Konrad-Adenauer-Allee 40/56626 Andernach, about a 1&frac12; hour-drive from Wiesbaden. There is a small parking lot across from the center. You can get to the geyser only by boat.

CostsTickets for adults are 13.50 euros. A discounted ticket for schoolchildren and the disabled is 9.80 euros. There is no charge for children under about 3 feet tall. Tickets are available at the center, and prices include entry to the center, the boat trip and the geyser.

A family ticket, valid for one or more adults and children, is 11.50 euros for each adult and 8.50 euros for children under 18. An annual ticket offers folks the chance to go back as often as they want. Prices are 28 euros for adults and 19 euros for schoolchildren and disabled.

Group tickets are also available at discounted prices. Groups with more than 20 must have a prior booking. A tour guide, for 30 people, is 35 euros.

FoodNo food is available at the geyser or at the Geyser Discovery Center, but the boat trip offers drinks. There is also a cafe with seats by the Rhine River in front of the boat boarding.