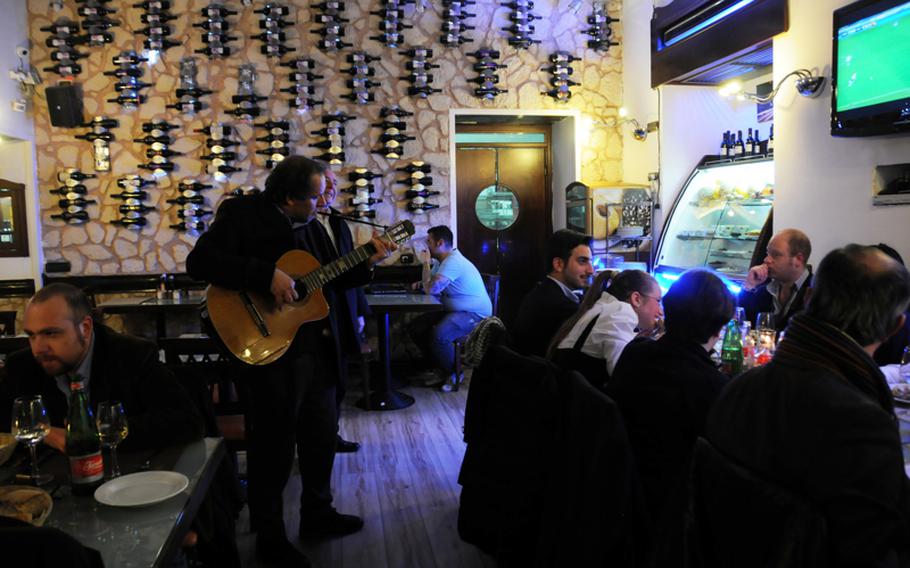 Buy Photo
Singers, called "i posteggiatori," visit restaurants to serenade, take requests and offer guests a tuneful taste of Neapolitan music. They add a traditional sound to go along with traditional food in this restaurant with the modern decor. (Sandra Jontz/Stars and Stripes)

Buy Photo
Singers, called "i posteggiatori," visit restaurants to serenade, take requests and offer guests a tuneful taste of Neapolitan music. They add a traditional sound to go along with traditional food in this restaurant with the modern decor. (Sandra Jontz/Stars and Stripes) 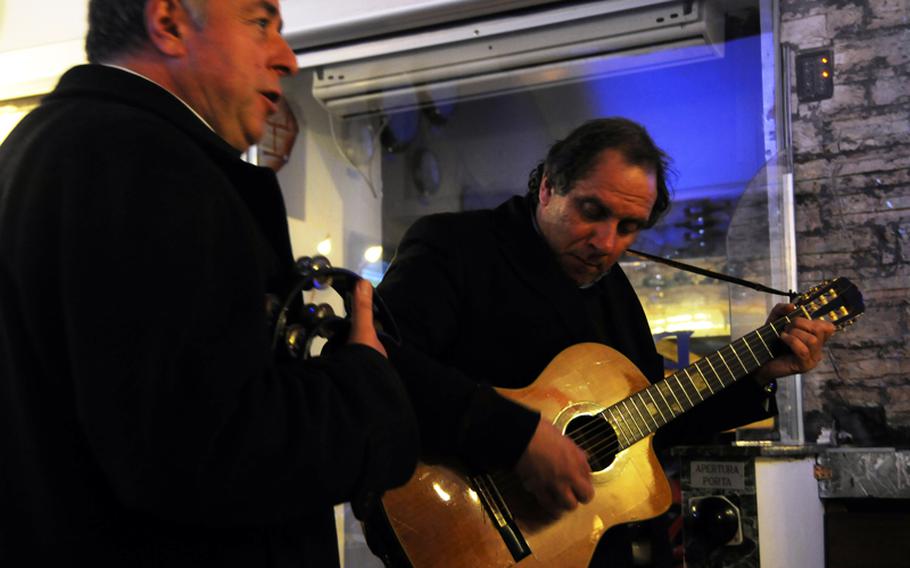 Buy Photo
It's quite common to see singers such as these, called "i posteggiatori," to stop in at restaurants to serenade, take requests and offer guests a tuneful taste of Neapolitan music. And yes, they're hoping you&#39;ll drop them a euro or two for a tip. Surprise them by requesting an old favorite, the popular Neapolitan love song, 'O surdato 'Nnammurato' ('The Soldier in Love'). (Sandra Jontz/Stars and Stripes) 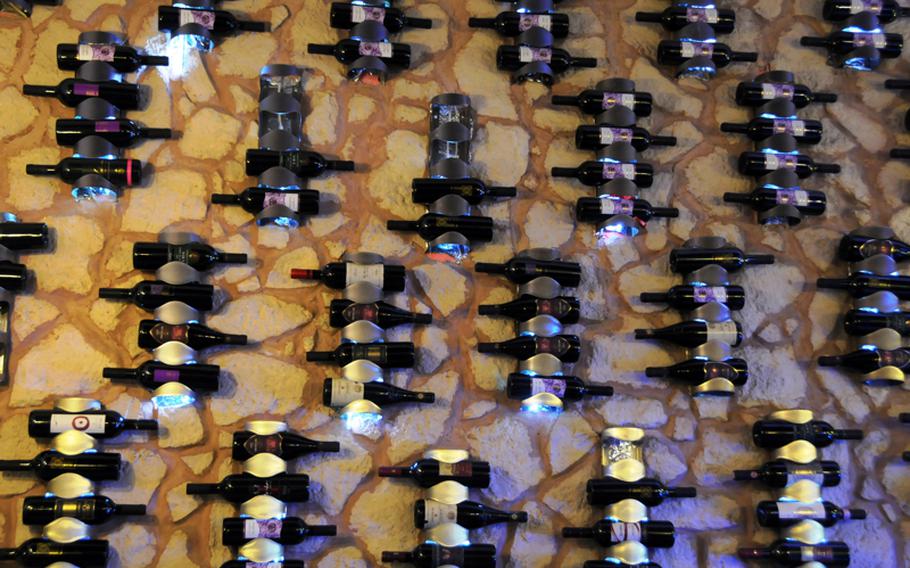 Buy Photo
Owners of Ristorante Poseidone boldly -- and modernly -- display their wine collection on one wall of the main dining room. (Sandra Jontz/Stars and Stripes) 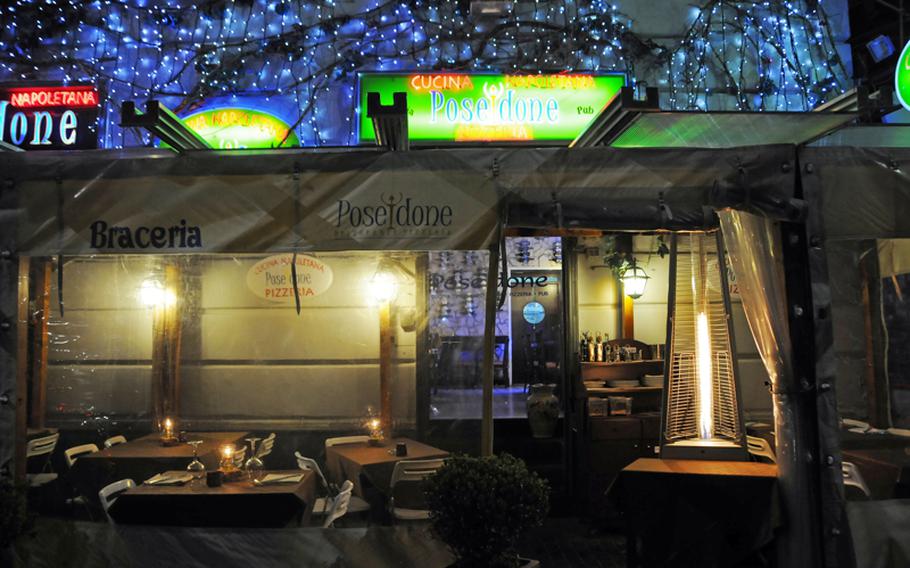 Buy Photo
The Ristorante Poseidone in Naples, Italy, is just down the street from the Castel Dell'Ovo. Outdoor seating s is available, enclosed and heated during colder months. (Sandra Jontz/Stars and Stripes) 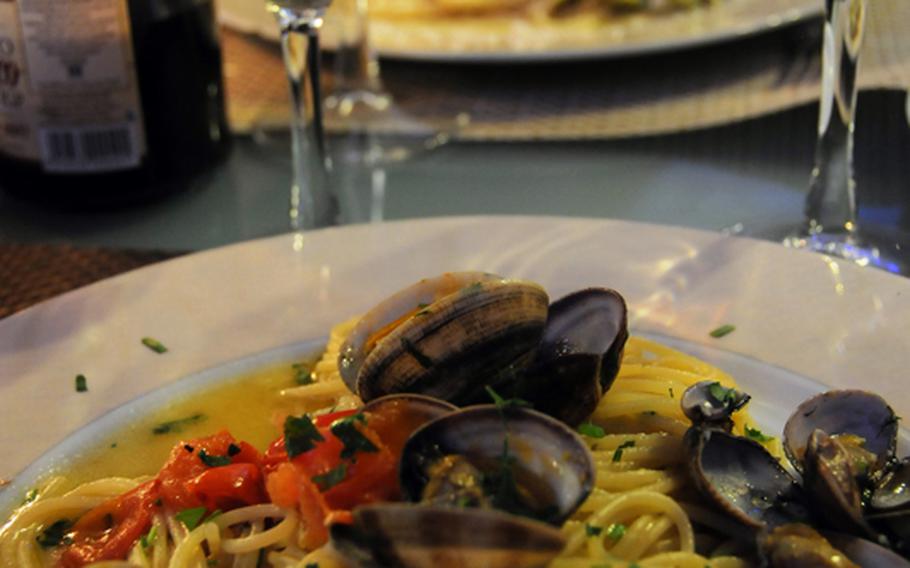 Buy Photo
Located just across the street from the famed Bay of Naples, fresh seafood -- from the antipasti to pasta dishes and main courses -- is the fare to delve into when visiting Ristorante Poseidone in Naples, Italy. (Sandra Jontz/Stars and Stripes) 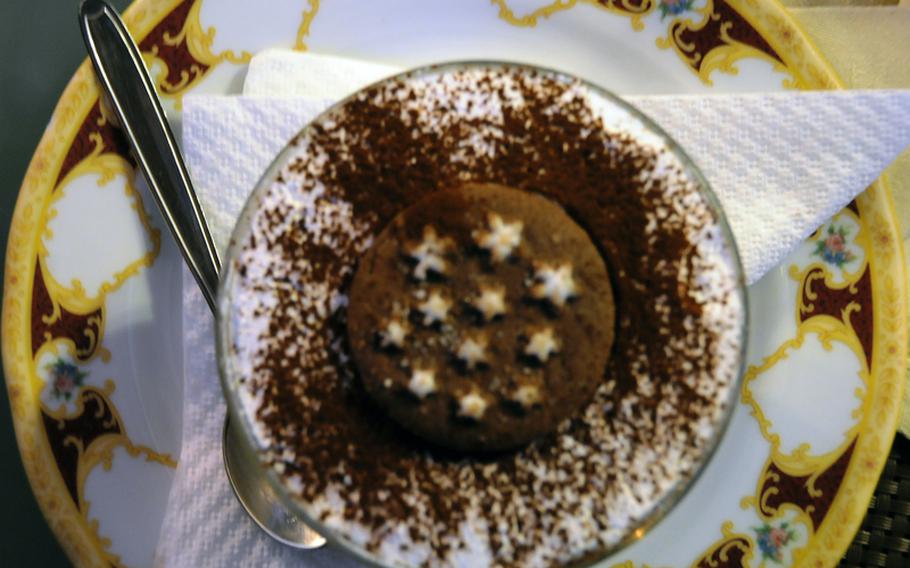 Buy Photo
Leave room for dessert, like this Nutella chocolate and whipped cream concoction topped with a chocolate cookie. (Sandra Jontz/Stars and Stripes)

NAPLES, Italy -- Go ahead; wow the strolling singers strumming the mandolin. Belt out the first refrain of the popular Neapolitan love song, &ldquo;&thinsp;&rsquo;O surdato &rsquo;Nnammurato&rdquo; (&ldquo;The Soldier in Love&rdquo;) with a guttural emphasis, and you just might be mistaken temporarily for a Neapolitan:

ca tenerte sempe a fianco a me

At many an Italian restaurant, diners often are graced (though some complain they&rsquo;re annoyed) by roving posteggiatori, singers who make their living popping in and out of restaurants to serenade diners with Neapolitan songs. Two posteggiatori (a takeoff of the word for parking attendants in that the singers would park themselves close to diners until they received a tip) recently graced diners at Ristorante Poseidone in the posh riverfront area of downtown Naples.

The singers fit in with the traditional Neapolitan cuisine of the restaurant, which is juxtaposed against its ultramodern decor &mdash; such as the restaurant&rsquo;s wine collection prominently splayed and displayed across the back wall of the main dining room. The owners went for both when they opened the restaurant seven years ago, head waiter Nando Boccamaiello said, because they wanted to appeal to a wide range of customers, from the highfalutin to a hungry tourist looking for a savory down-home meal.

In Naples, down-home typically is seafood-based.

From spaghetti alle vongole (spaghetti with clams, still in their shells) to a good variety of oven-baked pizzas, the fare at Ristorante Poseidone mirrors what you&rsquo;ll find in many other Neapolitan restaurants. That&rsquo;s not a bad thing &mdash; it&rsquo;s consistently good and without surprises.

Prices range from quite reasonable to a bit on the high side for Naples. Starters run between 9 euros and 12 euros, pasta dishes cost 12 euros to 14.50 euros, and meat dishes are in the 12- to 14.50-euro range. Then there&rsquo;s the &ldquo;imperial fresh large shrimp,&rdquo; at 80 euros for three or four of them. That&rsquo;s an entr&eacute;e for the highfalutin with cash to burn.

Diners come for the view as well as the food, provided they are among the lucky ones to get an outdoor table (during the warmer months, that is), said owner Maria Rosaria Di Gieolamo.

Ristoreante Poseidone is just a few paces across the street from the famed Castel dell&rsquo;Ovo (or Egg Castle), which gets its name from a legend that claims poet and sorcerer Virgil put a magical egg in the foundation of the castle. If said egg should ever break, catastrophe would rain down on Naples.

With any luck, not while you&rsquo;re one of those outside diners at Ristorante Poseidone.

Location: Via Partenope no. 1, Naples, Italy.

Direction: Restaurant is along Naples&rsquo; downtown waterfront near the Castel dell&rsquo;Ovo.

Clientele: Mostly Italian, but some tourists.

English menu: No, but several of the servers speak English.