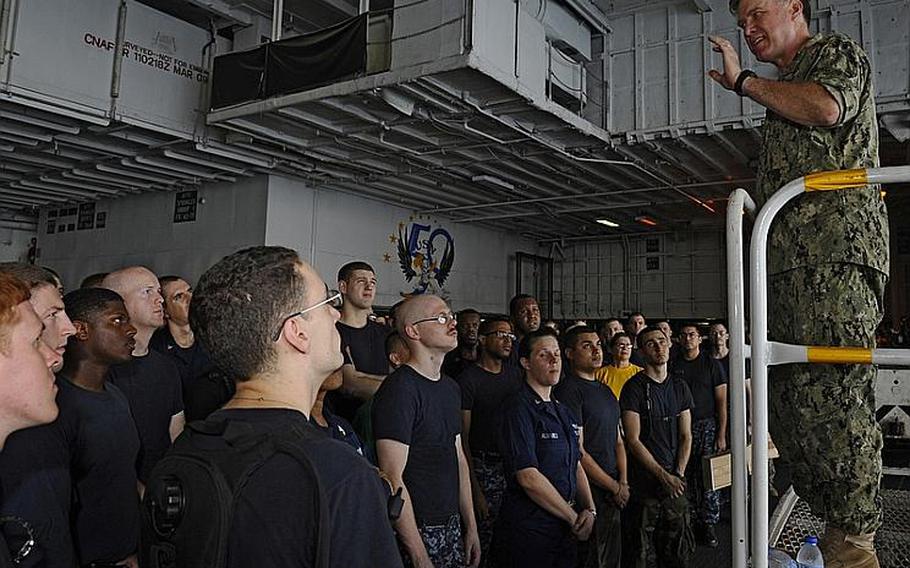 Adm. Mark Ferguson, vice chief of naval operations, said the Navy is poised to play a role in building a regional missile defense system across the Persian Gulf and is comfortable with its ability to deter aggression and reassure U.S. allies in the region. But Ferguson warned that the budget cuts set to take effect in January could affect future operations if Congress does not act to defer them.

&ldquo;Our role is really about the flexibility of forces, that they can move to various regions, both in this region in the Gulf and outside the Gulf,&rdquo; Ferguson said in a telephone interview Wednesday on the final day of a four-day trip to review the Navy&rsquo;s operations in the Persian Gulf amid growing tensions with Iran.

Ferguson visited the two aircraft carriers operating in the region, the USS Enterprise and the USS Dwight D. Eisenhower, and met with minesweeping and patrol craft crews. The Navy has steadily expanded its presence in the region in recent months.

Ferguson said the Navy has not had any concrete discussions about which regions might see a reduced presence if the cuts were carried out.

&ldquo;We have had pretty clear directions from the secretary of defense &hellip; that we are not to embark on that planning,&rdquo; Ferguson said.

Under sequestration, the Navy faces budget cuts through 2021 of $15 billion annually, or roughly the same amount the service spends each year on ship construction, Ferguson said. Such cuts could see the Navy&rsquo;s fleet reduced from its current 286 ships to 230 by 2021, according to Navy estimates.

&ldquo;Should sequestration be enacted, the Navy would not be able to support the current national defense strategy and it would cause a reduction in the size of the fleet to the point that we would have to relook at the strategy,&rdquo; Ferguson said. The Navy &ldquo;would be reduced both in size and in its presence around the globe.&rdquo;

The mandatory budget cuts come after a bipartisan committee of lawmakers failed to pass a deficit reduction plan in 2011.

&ldquo;Sequestration really just goes to every budget line and activity and reduces it by about 10 percent,&rdquo; Ferguson said. &ldquo;So there is not much planning in the execution, and in the aftermath, we would have to go back and we would have to redo the strategy. We would have to advise the leadership about what the Navy could do under those circumstances.&rdquo;

Ferguson said potential budget cuts were among the top concerns he heard from some of the 10,000 sailors he encountered during his Middle East trip.

While White House and Pentagon officials have said servicemembers would be spared from the cuts, Ferguson said that protection only covers job security, basic pay and bonuses. Health care, training and other benefits face potential cuts of more than 10 percent.

&ldquo;Those programs, my understanding is, they would not be exempt from sequestration,&rdquo; he said.

Ferguson also defended a series of Navy layoffs set to take effect Sept. 1, after a review board tasked with trimming overmanned ratings dismissed nearly 3,000 sailors. Ferguson, who announced the review process last year, said it was a one-time occurrence that allowed for increased advancement and re-enlistment opportunities.

He said the review process did not overreach by dismissing so many sailors, only to announce incentives earlier this summer aimed at enticing chief petty officers to head to sea and fill undermanned leadership positions.

More than 100 sailors were named in a lawsuit earlier this month that claims the Navy did not have the authority to carry out the mass layoffs. Some Republicans in Congress have called for a review of the dismissals.

South Carolina Republican Rep. Joe Wilson, the House&rsquo;s subcommittee chairman on military personnel, is considering asking for a hearing on the issue, according to his staff.

&ldquo;Rep. Wilson is troubled by the Navy&rsquo;s actions and is seeking clarification on the matter,&rdquo; said spokeswoman Caroline Delleney.