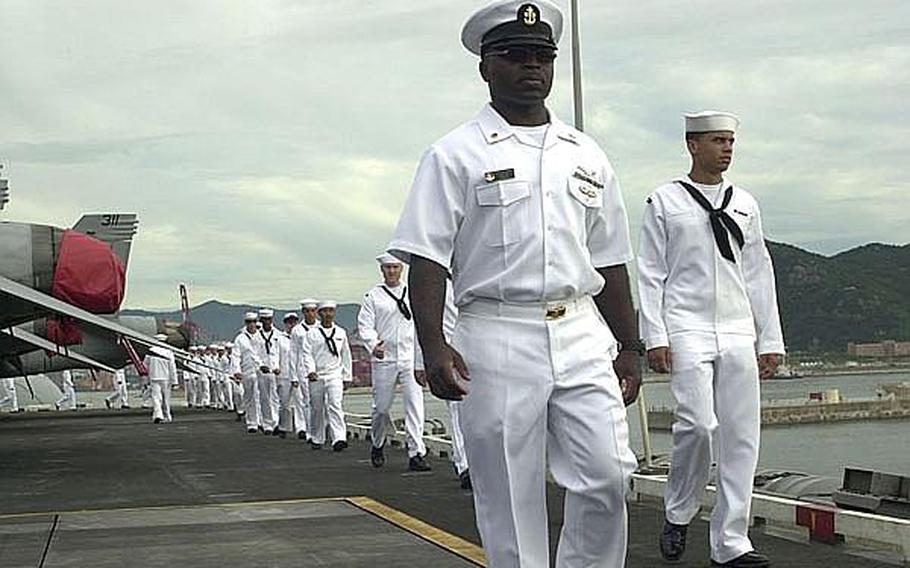 Sailors are led off the deck of the USS George Washington after the aircraft carrier pulled out of Pusan in South Korea en route for the Invincible Spirit military exercise July 25, 2010. (Jon Rabiroff/Stars and Stripes)

Enlisted sailors in dozens of career paths can expect to see more time at sea, the Navy said as it made moves this week to increase the number of forces afloat.

The ratio of time required at sea and on shore was updated for all positions in Navy on Monday, and sailors in 36 of those ratings will be on ships more often, according to a Navy administrative bulletin.

Also, 18 Navy positions will be classified as &ldquo;sea-intensive&rdquo; under the changes. Sailors in those job positions can expect to spend more than half their Navy careers at sea, the Navy said.

The Navy has been working since 2008 to move sailors from shore positions to sea duty as maritime force becomes increasingly useful around the world for humanitarian relief efforts and securing trade routes.

&ldquo;Our nation knows the importance and effectiveness of our forward-deployed Navy, whether delivering aid to those in need, or hunting terrorists,&rdquo; Rear Adm. Cynthia Covell, commander of the Navy Total Force Requirements Division, said in a prepared statement released by the Navy. &ldquo;The skills and capabilities of our Sailors are in great demand as an integral part of our national security and maritime strategy.&rdquo;

For a breakdown of the changes, see the Navy&rsquo;s new guidelines.

Meanwhile, this week&rsquo;s changes might require the Navy to shift some sailors&rsquo; rotation dates.

The Navy said rotations scheduled before March 2012 will likely not be affected but moves scheduled farther out could be moved to allow for more time at sea.

No sailors with less than 20 years&rsquo; experience will be forced to work at sea for more than five years at a time. Those with more than two decades in the Navy will not be involuntarily kept afloat for more than four years, according to the Navy.