Take note: Some Afghans' claims not worth paper they're written on 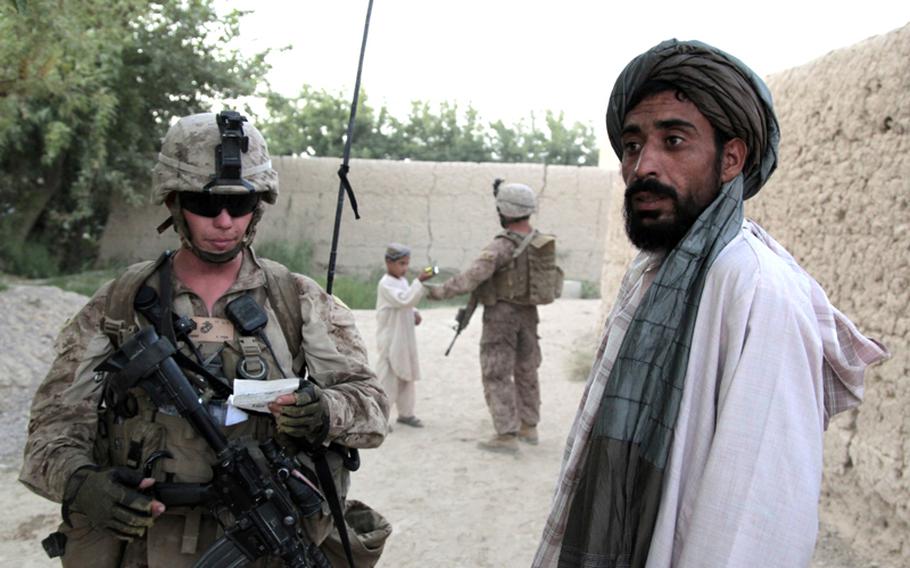 Buy Photo
Sgt. Chad Pauls from Richland Center, Wis., examines a note handed to him by a local man hoping to have Marines fix his damaged canal. (Matt Millham/Stars and Stripes)

GARMSIR, Afghanistan &mdash; The last orange rind of sun had just slipped past the horizon when an Afghan with a garland of ratty beard rushed to catch up with Marines on patrol north of Patrol Base Koshtay.

Like a patient surrendering a prescription to a pharmacist, he handed a creased rectangle of paper to Sgt. Chad Pauls. Written in the hand of a Marine from a different base, it said that somebody would take a look at the man&rsquo;s canal.

&ldquo;We don&rsquo;t have time,&rdquo; said Pauls, a squad leader from Richland Center, Wis., observing the diminishing quality of the day&rsquo;s light and passing the buck again. They were still a mile from base.

The man slumped in bewilderment as the Marines marched off into the start of night.

&ldquo;Everyone here believes that notes are as good as gold, and if you get a note that means you got a project; you get this, you get that, you&rsquo;re entitled to everything,&rdquo; 1st Lt. Chad Pimley had explained earlier.

A forward observer pulling double duty as the civil affairs officer for Company B, 1st Battalion, 3rd Marines, it&rsquo;s Portland, Oregon&rsquo;s Pimley who winds up with every note the company&rsquo;s Marines write.

He has a couple from a guy who keeps pressing the Marines to pay him rent for the simple fact they built a base near his house. &ldquo;Just pay me for my field,&rdquo; reads one. &ldquo;I will try to scam you for more money.&rdquo;

Another bears a shepherd&rsquo;s plea for restitution after a stray dog killed one of his sheep.

One legitimate claim&rsquo;s note leaves out the details of why a Marine shot Mohammad Agha&rsquo;s bull. The beast, which might have been on the Taliban payroll, was chasing him, so he shot it in the hoof to keep from getting gored. The wound proved fatal.

Pimley&rsquo;s favorite, though, is a shaggy-dog story jotted in the skeptical hand of a corporal who&rsquo;s seen local residents try to get over on Marines too many times. Pimley didn&rsquo;t realize until telling the story that he&rsquo;d somehow lost its corresponding note.

&ldquo;I can&rsquo;t believe I got rid of that thing,&rdquo; he said, throwing up his hands after a long search. &ldquo;That&rsquo;s all I wanted from this stupid country.&rdquo;

He relayed the tale and the note&rsquo;s contents to the best of his recollection.

It started when a vehicle sped toward a Marine checkpoint, ignoring signs to stop. The Marines, following procedure, fired a warning flare.

The vehicle stopped. The wind blew. The flare, dangling on a miniature parachute, came down in a field of wheat stubble. The stubble caught fire.

With the farmer&rsquo;s help, the Marines stomped it out before any standing wheat burned. The farmer was grateful, Pimley said.

&ldquo;So the patrol leader said, &lsquo;Great. Well, here, can you sign this saying that you don&rsquo;t need any compensation?&rsquo; &rdquo; The farmer replied, &ldquo; &lsquo;Oh, no, no, no. I need compensation.&rsquo; &rdquo;

So the squad leader told him to visit Pimley at Patrol Base Koshtay. Instead, he showed up at another base where he told a Marine corporal who was unaware of the incident a wild tale of a blaze in which much was lost.

Like the squad leader, the corporal told him to see Pimley at Koshtay. The farmer wouldn&rsquo;t leave without a note; so the corporal gave him a note.

The farmer had no idea what it said, but happily walked to Koshtay and handed it to Pimley.

&ldquo;I got it, and I just couldn&rsquo;t hold back laughing,&rdquo; Pimley said.

The note read something like, &ldquo;This guy&rsquo;s just trying to scam you. Please give me lots of money because I lost all of these mythological things in a fire that didn&rsquo;t really occur,&rdquo; Pimley said.

The blaze was real, but the farmer&rsquo;s yarn had grown legs. A few rugs he used to beat down the fire were in fact singed, but he claimed he also lost a watch.

Waving his arms as he explained this, Pimley caught a glint of metal on the farmer&rsquo;s wrist.

&ldquo;I said, &lsquo;Oh, it&rsquo;s OK, I found it for you. It&rsquo;s right there,&rsquo; &rdquo; and pointed to the farmer&rsquo;s wrist. The farmer quickly changed his story.

&ldquo;Obviously, we try to reimburse people for any battle damage that &hellip; may have happened because of us,&rdquo; Pimley said.

So he paid for the rugs. But he wasn&rsquo;t buying any watches.