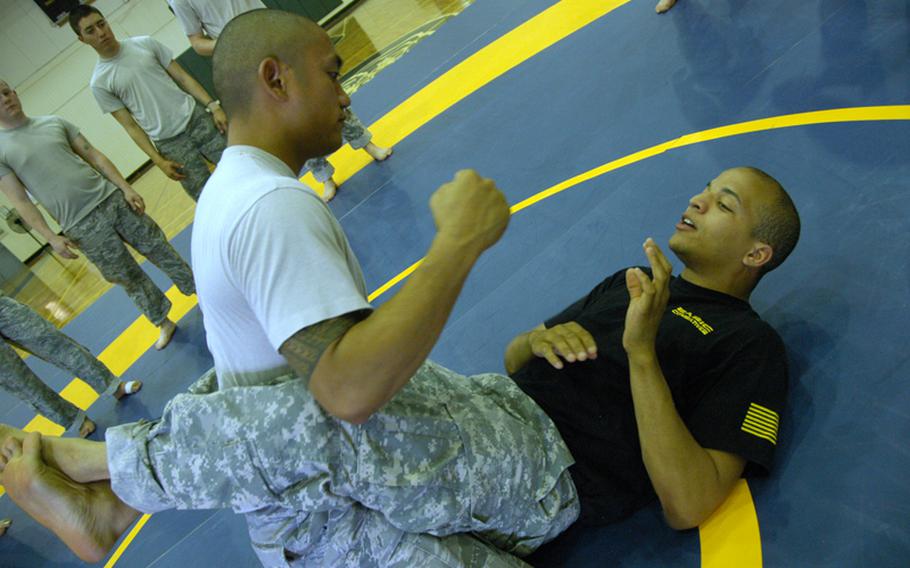 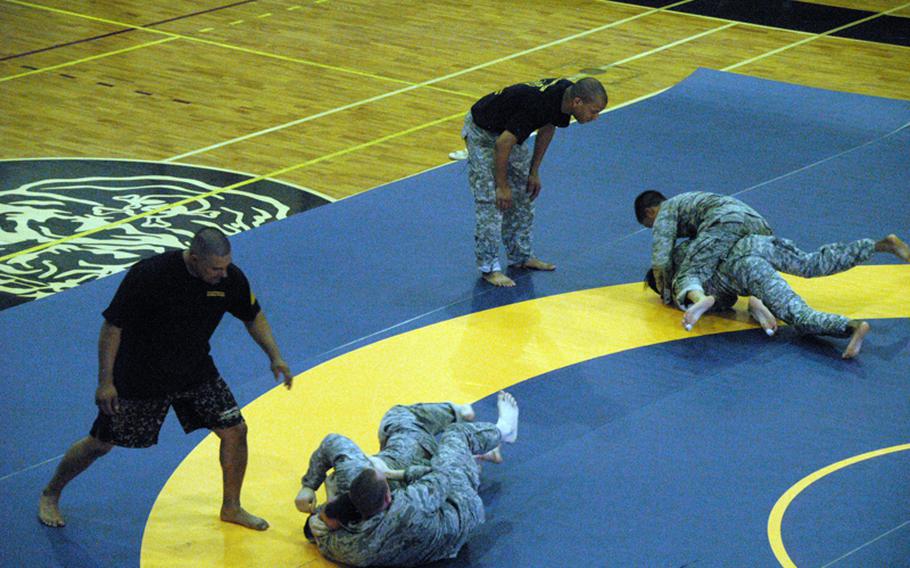 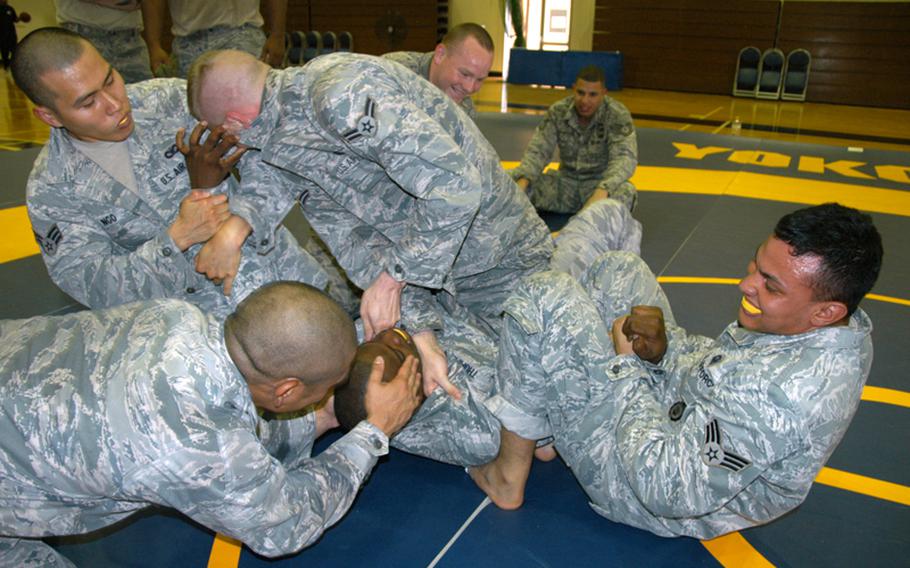 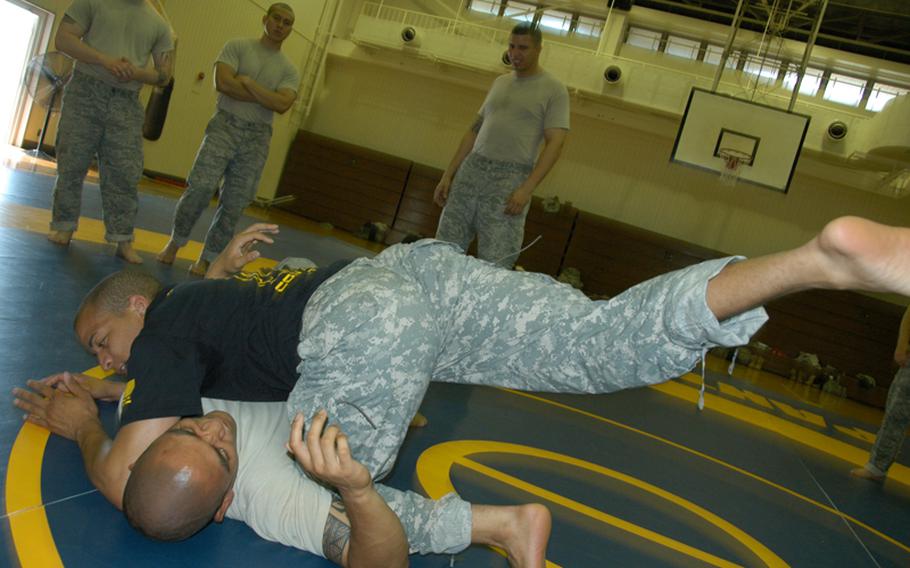 YOKOTA AIR BASE, Japan &mdash; Army instructors are training airmen in Japan in hand-to-hand combat techniques developed to protect soldiers deployed to the wars in Iraq and Afghanistan.

Last week, 18 airmen from Yokota Air Base took part in the training at the Samurai Fitness Center, all under the watchful gaze of Army Combatives experts.

The airmen &mdash; only the second group from Yokota to do the training &mdash; learned how to throw an attacker to the ground, then choke him out or break his arm. They also learned how to defend themselves against someone trying to do the same to them. And they practiced fighting in the sort of heavy flak jackets and helmets they can expect to wear in a war zone.

By the end of the week the airmen were qualified as Level I Army Combatives trainers, able to pass on the basic techniques to their comrades.

Leonardo Munoz, 42, who&rsquo;s been teaching Combatives to soldiers at Camp Zama since August, said the Army has a well-developed program to train personnel in hand-to-hand fighting.

Munoz said the move to offer Army Combatives to the airmen is part of a drive to offer similar training to military personnel &mdash; regardless of service branch &mdash; who are likely to find themselves fighting alongside each other during deployments. Many of the airmen who learned the Army Combatives skills serve in Yokota&rsquo;s security forces.

Munoz rated them as more intelligent than the soldiers he&rsquo;s instructed and better able to understand the concepts involved in Army Combatives.

&ldquo;They retain the materials better,&rdquo; he said of the airmen, adding that he&rsquo;s invited them to pit their skills against soldiers from Camp Zama in a tournament in December.

Air Force Senior Master Sgt. Vincent Burrell, 43, of Birmingham, Ala., is one of a handful of airmen at Yokota qualified as an Army Combatives Level II instructor. He said there&rsquo;s a lot of interest in the program at Yokota and airmen had to be turned away from last week&rsquo;s course. Another course is planned for October, he said.

Staff Sgt. Thomas Bonte, 27, of Pensacola, Fla., a security forces airman at Yokota, said he did hand-to-hand combat training ahead of a deployment to Baghdad but that the Army Combatives training is more in-depth.

&ldquo;It is also a lot more painful,&rdquo; he said of the bruising sessions.

Bonte said he&rsquo;s never had to physically restrain an airman when he was on duty, but his fellow security forces airmen have had to do so.

&ldquo;I feel more confident (after the Combatives training),&rdquo; he said. &ldquo;I like that you can prevail, no matter the size of your opponent. It is all about your technique.&rdquo;

It doesn&rsquo;t take a lot of muscle to apply the Army Combatives techniques, he said.

&ldquo;When I started I tried to muscle my way through it, but that just makes you tired,&rdquo; he said. &ldquo;It&rsquo;s about concentrating your mind on what technique you are going to apply next.&rdquo;

Several female airmen took part in the training. According to Munoz, women are often more aggressive than men.

First Sgt. Elizabeth Cornejo, 37, of Ontario, Calif., an Air Force communications NCO, tapped out one of her male colleagues.

&ldquo;I think I gave him a bloody nose,&rdquo; she said later.

Cornejo said she wished she had the combatives skills a few years ago when another woman punched her and pulled her hair in a nightclub.

&ldquo;If it happened here I would use what I have learned to not get punched in the head,&rdquo; she said, adding that she is an avid Ultimate Fighting Championship fan.