New Army guidelines making it tougher for NCOs to re-enlist 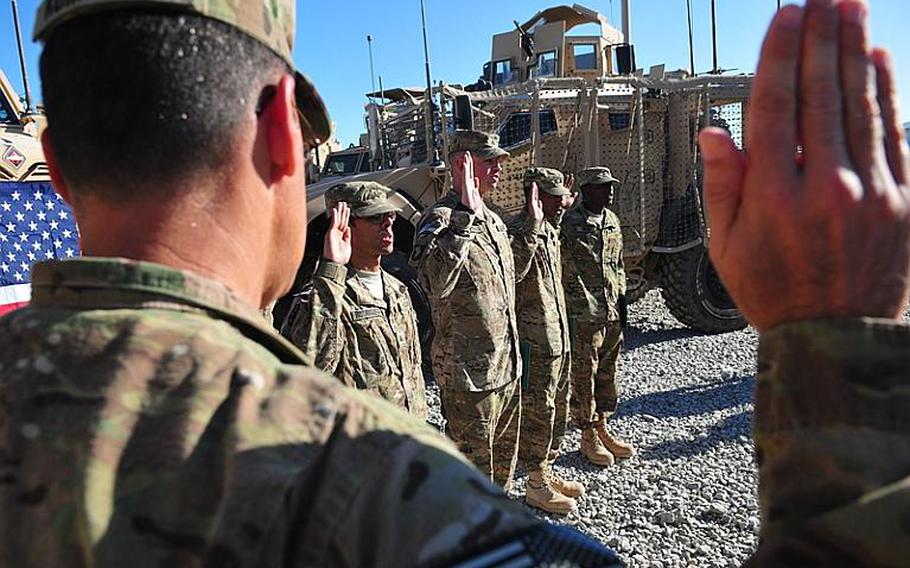 A mass re-enlistment takes place in Afghanistan in October. Under new guidelines, brigade-level commanders have the authority to decide which soldiers will be allowed to re-enlist. (U.S. Army photo)

SEOUL &mdash; It just got a lot harder to stay in the Army.

Under new guidelines that went into effect Thursday, E-6s and above might not be given the option to re-enlist if they have certain negative marks on their service records. And some of those who do have the option of re-upping, could have to retrain to other jobs to do so.

As a result of the new rules, three in 10 soldiers in South Korea, for example, probably won&rsquo;t get the chance to re-enlist, Army officials there said.

&ldquo;Tough decisions are ahead,&rdquo; according to a Feb. 2 memo issued by Sgt. Maj. of the Army Raymond F. Chandler III, Army Chief of Staff Gen. Raymond T. Odierno and Secretary of the Army John M. McHugh. &ldquo;Some fully qualified soldiers will be denied re-enlistment. Commanders must carefully assess their soldiers and ensure only (the) best are retained to meet the needs of (the) Army.&rdquo;

&ldquo;As we begin this deliberate process, it is imperative we retain those soldiers with the greatest potential for future service &mdash; ones truly deserving to remain a part of our Army team,&rdquo; the memo said.

The Army appears to be treating its planned troop reductions as an opportunity to make itself a more lean, mean fighting machine.

Last month, as part of the Pentagon&rsquo;s announced plans to cut spending by close to $500 billion over the next decade, the Army said it would cut 10,000 soldiers in fiscal 2013 and a total of 72,000 over the next five years. The new guidelines facing noncommissioned officers are part of that effort.

According to a separate directive issued by McHugh&rsquo;s office, there will be enhanced retention requirements for staff sergeants and above who have not executed an indefinite re-enlistment contract.

They will not be eligible to re-enlist if they have in their file any of the following items: a relief-for-cause noncommissioned officer evaluation report; a &ldquo;no&rdquo; listed in Part IV or a senior rating of 4 or 5 in Part V of an NCOER; or a Service School Academic Evaluation Report indicating a failure in an NCO Education System course.

The directive also added to the mandatory reasons for barring a soldier&rsquo;s re-enlistment:

- Loss of primary military occupational specialty due to fault of the soldier.

- Not being recommended for re-enlistment by unit commander.

- A drug or alcohol incident.

- Was away without leave more than 96 hours during current enlistment or the re-enlistment period.

Staff Sgt. Nathaniel Goza &mdash; a 10-year veteran who is planning to re-enlist &mdash; said he supports the new guidelines.

&ldquo;Personally, I think raising the bar &hellip; is a good thing because what it does is keep the best and the brightest in our force, and I think that&rsquo;s what we need,&rdquo; he said. &ldquo;I think cutting away the fat is a good term to use.&rdquo;

In South Korea, that means some serious trimming.

Eighth Army brigade commanders will be given an objective of retaining an average of 68 percent of those eligible for re-enlistment, according to Sgt. Maj. Kelvin Raibon, a South Korea-based 8th Army command career counselor.

&ldquo;The goal has never been to re-enlist a substandard soldier,&rdquo; he said.

The new guidelines, he said, will ensure that only the most qualified across a broad spectrum of qualities will be allowed to extend their Army service.

&ldquo;Re-enlistment has always been a privilege, not a right,&rdquo; he said.

But having a stellar record doesn&rsquo;t mean an automatic re-enlistment under the new guidelines. Some soldiers will be required to move from &ldquo;over-strength&rdquo; career fields to &ldquo;under-strength&rdquo; military occupations skills specialties.

Raibon said the Army will continue to try to accommodate soldiers&rsquo; wishes in changing their MOS, but all will be counseled to understand they may be directed into an MOS they don&rsquo;t necessarily want.

Spc. Theodosis Efthimiadis, a South Korea-based information technology specialist, said he was not happy to hear that he would be forced to change his MOS when he re-enlists because his current job is over-strength.

&ldquo;I think I&rsquo;m very good at my job right now, so I&rsquo;m disappointed,&rdquo; said Efthimiadis, who will be moving into satellite communications. &ldquo;But, also, I see a lot of potential in this new sector and, of course, it&rsquo;s going to give me more tools for the future.

&ldquo;It&rsquo;s not bad, really,&rdquo; he said. &ldquo;Of course, the military is a different lifestyle. But &hellip; if you do your homework, you can prepare for the unexpected.&rdquo;

Master Sgt. Shelia Obleton, the 8th Army&rsquo;s senior retention operations NCO, said despite all the changes in the re-enlistment process, &ldquo;I don&rsquo;t think we&rsquo;re going to have an influx of soldiers knocking our (career counselors&rsquo;) doors down,&rdquo; because the Army has done a thorough job of getting out information about the revisions and everyone coming up on potential re-enlistment is required to talk with a specialist about their options.

There is one other change that took effect on Thursday. Under the new rules, brigade-level commanders have the authority to decide which soldiers will be allowed to re-enlist. Until now, only the Human Resources Command could make such decisions.

&ldquo;We will fundamentally change the active-component retention program. This will provide our brigade-level commanders the flexibility and agility needed to retain those who best meet the needs of our Army,&rdquo; reads the Chandler-Odierno-McHugh memo.

However, waivers to the new re-enlistment requirements will still be considered on a case-by-case basis by the Human Resources Command.