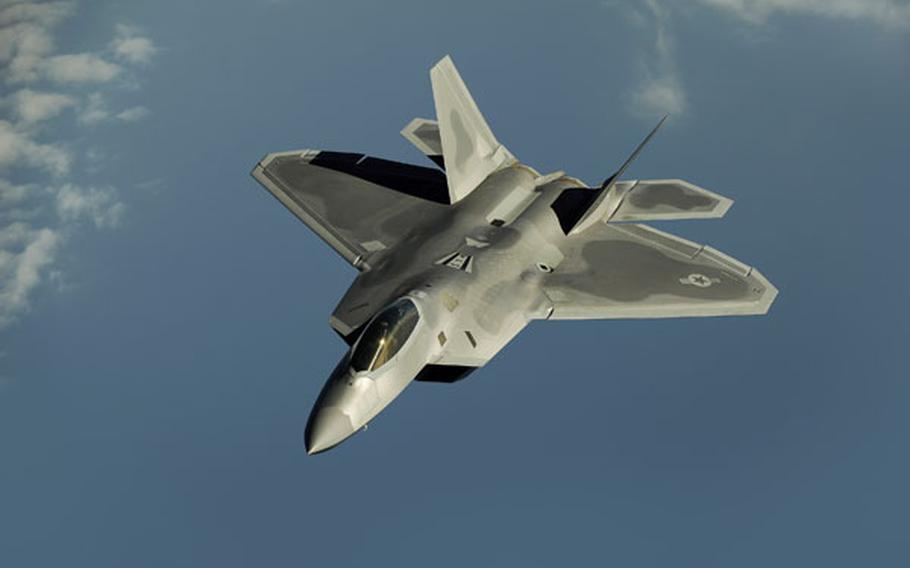 WASHINGTON - Air Force officials said Wednesday they still have not found the cause of the hypoxia-like symptoms that have affected F-22 Raptor pilots and maintainers, nor are they sure why a short-term cough that can result from breathing high concentrations of oxygen is more common in F-22 pilots than in F-15 and F-16 pilots.

"The flight envelope of the F-22 is significantly different than the other fighters, and this may contribute to the cough, but we're continuing to evaluate it with our pilots," Brig. Gen. Daniel Wyman, surgeon general of Air Combat Command, told reporters in a conference call.

The F-22 can fly faster and at much higher altitudes than other fighters.

The Air Force grounded the supersonic fighters last May after at least 14 "physiological incidents" - pilots experienced headaches, nausea, fatigue, difficulty concentrating and other symptoms that are typical for a lack of oxygen - but returned the fighters to the air in September. In March, members of an Air Force advisory panel said they had not been able to determine what caused the incidents, but they are confident the F-22's oxygen system does not pose any unnecessary risk.

Since the Raptors returned to flight, there have been 11 incidents of symptoms associated with oxygen deprivation in F-22 pilots - and five aircraft maintainers have reported those types of symptoms as well, Wyman said. The maintainers were inside the cockpits of the aircraft while the plane was on the ground, Wyman said, but were not using the oxygen masks.

The symptoms in each incident have been "nonspecific," varying from person to person, but are symptoms characteristic of oxygen deprivation, Wyman said. Two pilots were treated in a hyperbaric chamber.

Before returning to flight, Raptor pilots went through additional oxygen-deprivation training to ensure they could recognize their symptoms. Additional sensors and emergency measures also were added to the planes so pilots can easily activate backup oxygen and alarms at the first sign of trouble, said Col. Paul Gardetto, Air Combat Command's chief of aerospace physiology.

No pilots have experienced the symptoms during long-distance flights over water or while flying missions during deployment, Wyman said.

Last week, two F-22 pilots appeared on CBS's "60 Minutes" to discuss the safety issues and explain why they are refusing to fly until the problem is resolved. Those pilots have been granted whistleblower status and will not be punished for coming forward, the Air Force Times reported.

While the Air Force has not found a "smoking gun," they continue to investigate the incidents and search for the cause, Wyman said.

"The safety of our pilots is our primary concern," he said.