With ‘what-ifs’ and isolation, coronavirus risks weigh on caregivers for veterans 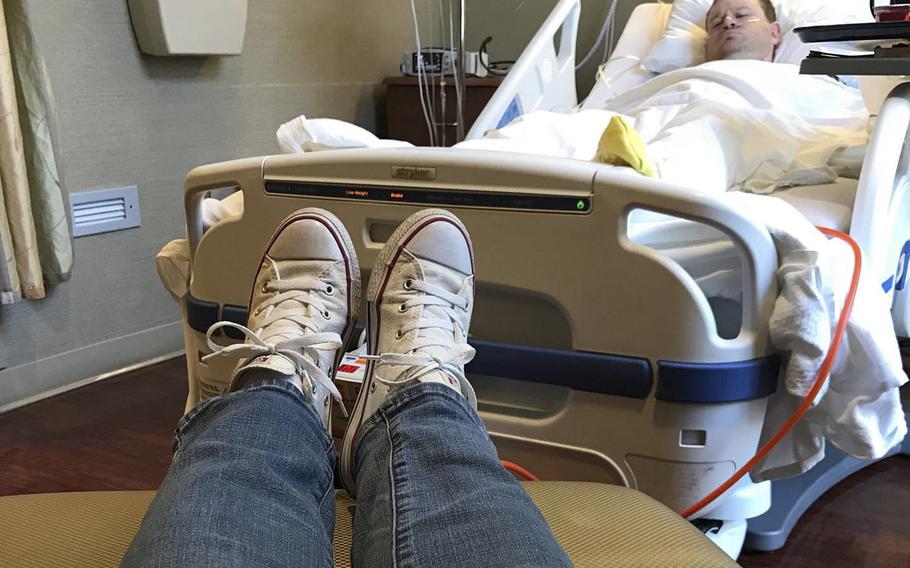 Retired Army Spc. James Smith underwent his 20th surgery for wounds sustained in Iraq in 2005, shortly before the coronavirus pandemic began. His sister, Jennifer Mackinday, who is also his main caregiver, took him to her home to recover. (Jennifer Mackinday)

Retired Army Spc. James Smith underwent his 20th surgery for wounds sustained in Iraq in 2005, shortly before the coronavirus pandemic began. His sister, Jennifer Mackinday, who is also his main caregiver, took him to her home to recover. (Jennifer Mackinday) 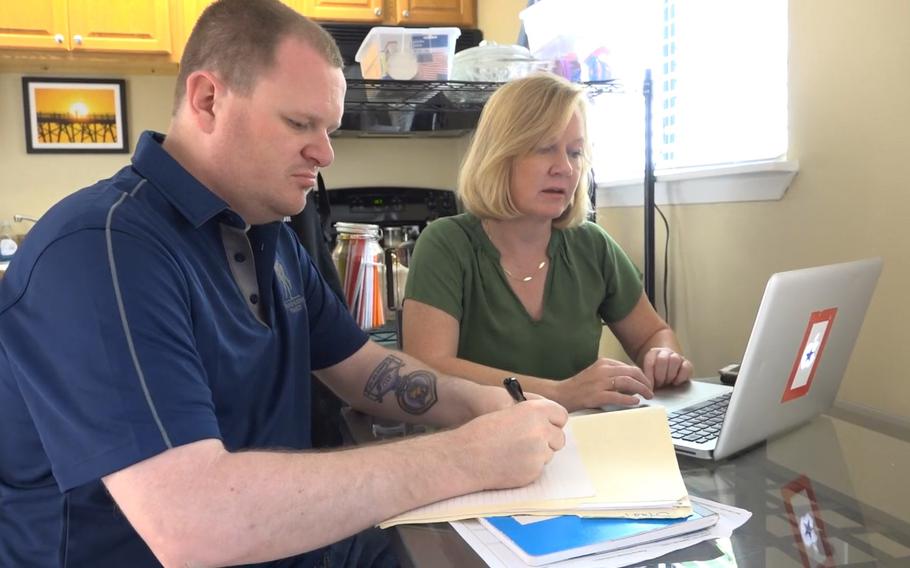 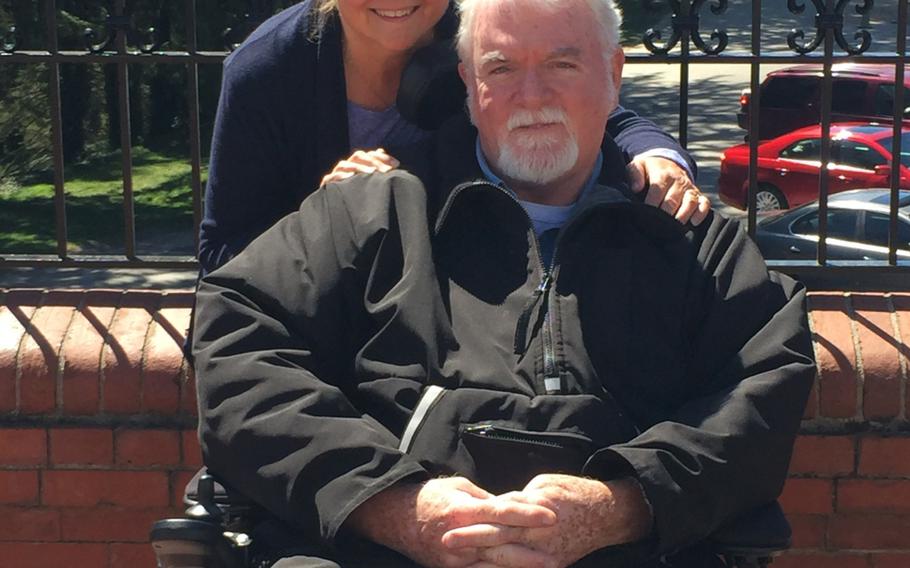 Mary Hahn Ward is shown with her husband Tom, a Vietnam-era Marine veteran who in 2010 was diagnosed with amyotrophic lateral sclerosis, also known as Lou Gehrig's disease. The coronavirus pandemic has increased the physical and mental burden on caregivers like Ward, whose husband is at high risk from the virus. (Mary Hahn Ward) Mary Hahn Ward and Jennifer Mackinday, both family caregivers of wounded veterans, host a podcast, ''This Caregiver Life,'' that talks about the challenges of caring for loved ones. (Jennifer Mackinday)

The coronavirus threat has Jennifer Mackinday taking on more and more responsibilities as the main caregiver to her brother James Smith, who was badly wounded by a roadside bomb in Iraq 15 years ago.

Mackinday has cut the number of health care workers coming to treat Smith, fearing one of them might bring the virus into the house. She has isolated herself from her own adult son so that he could take over caring for his uncle if she were to get sick.

“We’ve never been through anything like this, and there’s no playbook,” said Mackinday, who is also a spokeswoman for the Wounded Warrior Project. “It’s difficult for everyone but there are extra burdens for caregivers.”

Even for caregivers used to the responsibilities of helping their loved ones, the emerging consensus that the coronavirus poses a greater risk of serious illness or death to people with underlying medical conditions has added a new level of stress.

For Mary Hahn Ward, something as mundane as a trip to the store can feel like she’s putting the life of her husband of 40 years, Tom, at risk.

Ward has been caring for Tom since 2010, when he was diagnosed with Lou Gehrig’s disease, also known as amyotrophic lateral sclerosis. Tom served in the Marine Corps from 1972-75 and the Department of Veterans Affairs considers ALS a service-connected illness.

Like Mackinday, Ward has stopped medical workers from coming to her home, even the physical therapist who helps to lessen Tom’s pain and increase his flexibility. She has taken on that role and others, adding two more hours to her daily workload, she said.

A trip to buy groceries or get gas may bring the coronavirus into her house, Ward said. So she keeps those to a minimum.

The virus causes severe lung disease in some cases, and older men are more likely to die from the disease than women or any other group. With Tom’s lungs already impaired because of ALS, Ward believes he would likely die if he were to contract the coronavirus.

“I feel utterly and completely responsible for Tom’s life in a way I never did before COVID-19,” Ward said.

The couple has decided to keep him at home, knowing that the virus’ highly contagious nature would mean she could not be with Tom if he were to be hospitalized.

“At least he would be with someone who loved him at the end of his life,” Ward said. “I feel like this is such a dramatic statement, yet it cycles through my mind a few times a day — the what-ifs.”

Mackinday and Ward are among some 5.5 million family members taking care of a wounded veteran in the United States, according to a 2014 Rand Corp. report.

Many caregivers spend more than 40 hours a week on the needs of their veterans, often while also raising children and holding down a job, the study found. Caregivers tend to experience worse health, are under greater financial strain and at greater risk of depression than the general population, it said.

More than three-fourths of caregivers said the COVID-19 crisis has negatively affected the care of their veteran family member, 859 respondents said in a poll released Wednesday by the Elizabeth Dole Foundation.

While taking on more tasks to minimize the risk of infection has affected caregivers’ physical well-being, often leaving them exhausted at the end of a day, the what-ifs and sense of isolation caused by the pandemic are increasing the mental burden facing veterans’ caregivers, said Kathy Roth-Douquet, co-founder and CEO of the California-based nonprofit Blue Star Families.

“You’re already fighting isolation in the best of circumstances,” Roth-Douquet said. Because military families are often on the move, some of them lack the deep community ties that could help them cope, she said.

In addition, caregivers often feel they have to put the care of their veterans above their own welfare, said Elisa Borah, director of the Institute for Military and Veteran Family Wellness at the University of Texas at Austin. They should make time for themselves, she said, but that can be a challenge when they’re also raising kids, who are learning from home because of the pandemic.

“It may feel like you’re carrying the weight of everyone’s health on your shoulders, but you can’t,” she said. “None of us are that strong.”

Reaching out to others is key, said Mackinday, who hosts a podcast with Hahn called “This Caregiver Life.” Mackiday also moderates a caregivers’ Facebook group created by the Elizabeth Dole Foundation, which provides tips on overcoming the problems the pandemic has foisted on them. The group also comforts those who have had a bad day.

“I really think that’s the silver lining of this crisis,” Mackinday said. “We’re getting a better understanding of how strong we are. We’re finding new ways to connect.”