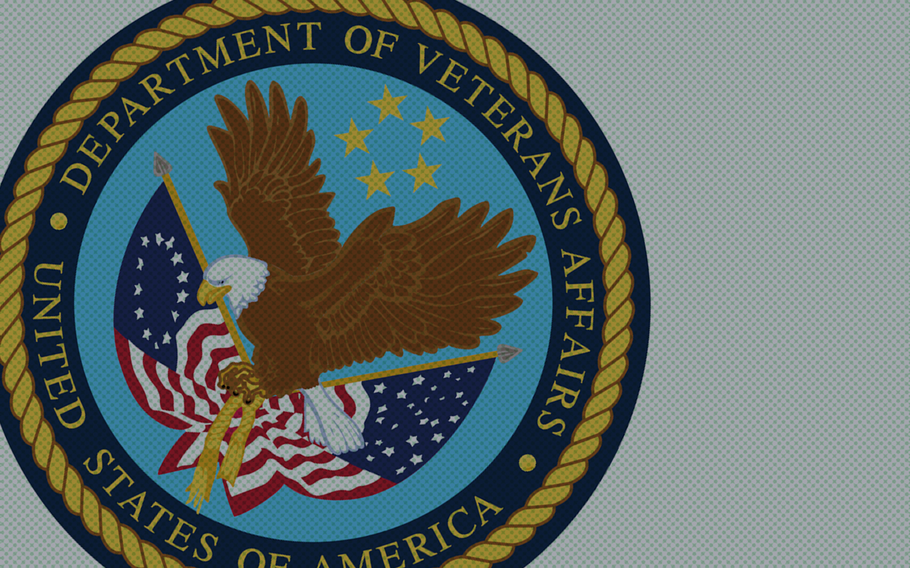 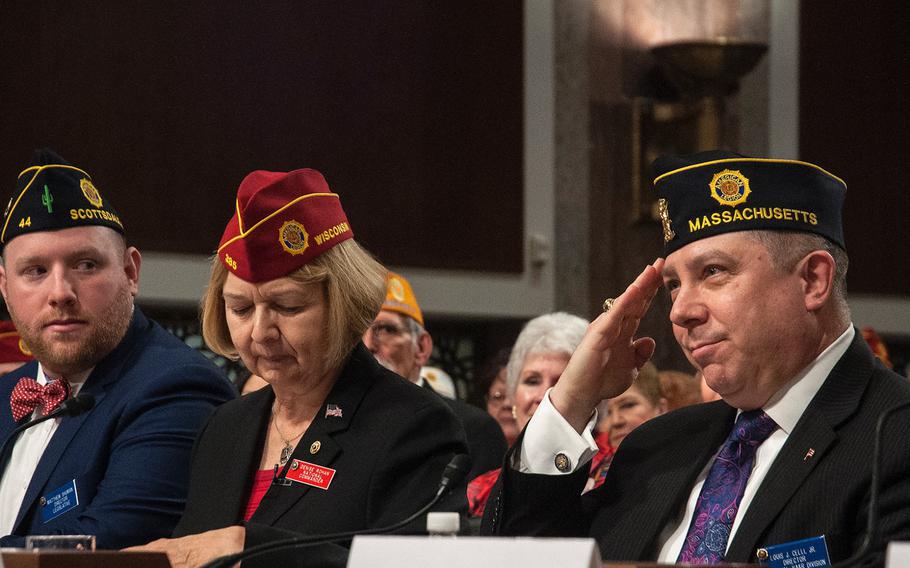 Buy Photo
American Legion Director of Veterans Affairs and Rehabilitation Louis Celli salutes during a hearing on Capitol Hill in Washington, D.C., on Feb. 28, 2018. Next to him is the group's National Commander Denise Rohan, and at left is Matthew Shuman, the group's director for the National Legislative Division. According to Celli, a plan allowing veterans to receive care through the Veterans Choice program only "upon authorization of the VA secretary, was still included in a spending bill proposal as of Monday, March 19. (Carlos Bongioanni/Stars and Stripes) 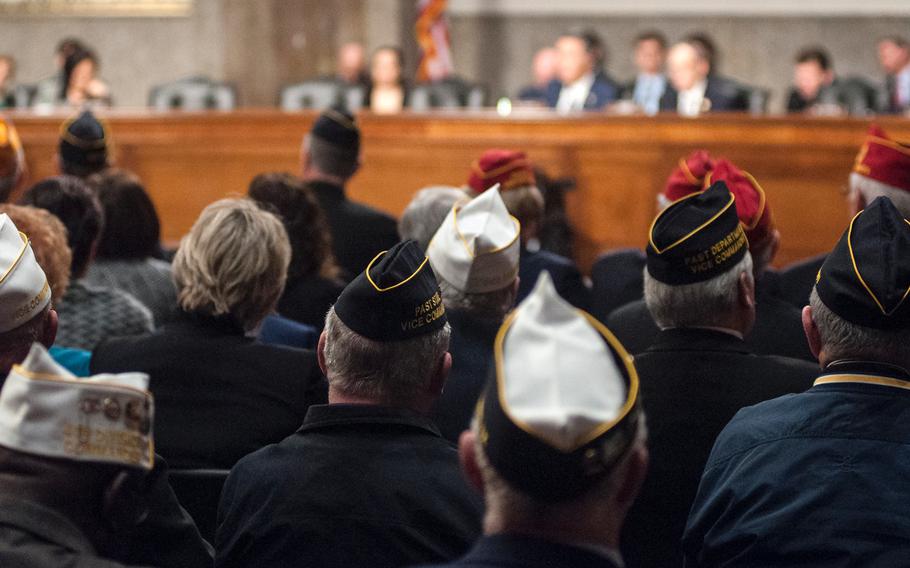 American Legion members attend a legislative agenda hearing on Capitol Hill in Washington, D.C., on Feb. 28, 2018. As debate in Congress over a $1.3 trillion spending bill continued Tuesday, March, 20, eight major veterans organizations including the American Legion were fighting for VA reforms to survive the negotiations. (Carlos Bongioanni/Stars and Stri)

WASHINGTON — A massive spending deal that Congress struggled to resolve by Tuesday morning purportedly contains extensive reforms for the Department of Veterans Affairs, including an overhaul to the controversial and much-debated Veterans Choice program.

Lawmakers are working on a $1.3 trillion deal that would fund federal agencies through the end of the fiscal year, which ends Sept. 30. It was uncertain Tuesday morning when Congress would unveil or vote on the spending bill. They face a Friday deadline or else trigger a partial government shutdown.

Negotiators worked late into Monday night, delayed by several hot-button initiatives vying to be tacked onto the bill as policy riders. According to multiple news reports, lawmakers hadn’t settled on proposed changes to Affordable Health Care, funding for President Donald Trump’s proposed border wall, a path to citizenship for recipients of Deferred Action for Childhood Arrivals, or DACA, and other issues that could potentially be included.

As the debate continued Tuesday, eight major veterans organizations were fighting for VA reforms to survive the negotiations.

Besides revamping the Choice program, the spending bill contains a gradual expansion of caregiver benefits to veterans injured before the 9/11 terrorist attacks, they said. It would also create a systematic review of VA infrastructure, with the intention of disposing of aging and underused facilities nationwide.

“Although this veterans legislation has only recently been shared with our organizations, it is based on months and months of consultation with our organizations and many other stakeholders,” they wrote Monday in a letter to congressional leaders. “While not perfect, we believe that this legislation represents a fair compromise that will help to strengthen veterans’ health care for future generations, while ensuring that caregivers of veterans of all generations get the support they deserve.”

The reforms were each previously introduced in Congress as separate bills, but all of them have been deadlocked in recent months. If they fail to pass as part of the spending bill, which creates a fast-track for approval, it’s uncertain when Congress would take them up again.

Arguably the most pressing measure — and most debated — is the proposed change to the Choice program.

The program allows veterans to receive private-sector medical care and it was created in 2014 in response to the VA wait-time scandal in order to ease demand on VA services.

Negotiations of potential changes to the program have created disagreements and delays in Congress and highlighted divisions between VA leadership and White House insiders. The option of more health care “choice” for veterans was a promise Trump delivered in his presidential campaign. The crux of the dispute is how far veterans’ health care should be pushed into the private sector.

The plan included in the spending bill as of Monday night would allow veterans to receive care through the program only “upon authorization” of the VA secretary, said Louis Celli, director of veterans affairs and rehabilitation with the American Legion. Some veterans organizations, including the Legion, believe that stipulation will prevent unfettered access to the private sector. Major veterans groups in Washington are weary of too much private-sector care leading to the erosion and eventual dismantling of the VA health care system.

Of the significant proposals introduced in Congress during the last year to alter the Choice program, all of them would do away with unyielding rules that allow veterans to go into the private sector only when they live more than 40 miles driving distance from a VA facility or have to wait longer than 30 days for an appointment. Instead, lawmakers think eligibility should be determined on a case-by-case basis, taking into account the quality of medical care, a veteran’s distance from a VA facility, wait times and other factors.

The eight veterans organizations offered their support for the overhaul included in the spending bill. They described it as a “balanced approach to ensuring timely access to all enrolled veterans, while continuing to strengthen the VA health care system that millions of veterans choose and rely on.”

“The legislation will ensure that veterans who cannot get appointments or services at VA will have the choice to use qualified community providers,” they wrote.

They also said the spending bill contained a gradual expansion of caregiver benefits. Benefits such as monthly stipends, respite care and counseling are only available now to veterans injured after 9/11, which veterans and advocates say creates an unfair discrepancy.

Changes to eligibility have been stalled for years in Congress because of the high cost of expanding benefits to more families. Officials with Trump’s administration told Congress in January that the White House couldn’t support the expansion because of fiscal restraints.

In their letter to Congress, veterans groups said the changes “will have tremendous impact on the lives of thousands of deserving men and women who are currently ineligible.”

In a separate statement, Carl Blake, director of Paralyzed Veterans of America, argued, “there is no reason to deny this benefit.”

Also included in the spending omnibus, the groups said, is a measure ordering the review of VA facilities. In October, the House Committee on Veterans’ Affairs proposed creating a commission to recommend which VA buildings to close and where the agency should invest.

VA Secretary David Shulkin said during a “State of the VA” address in May that dealing with bad infrastructure is one of his top priorities. He announced the agency was in the process of disposing of or finding other uses for 430 vacant or nearly vacant buildings and the department is reviewing another 784 buildings that are still in use.

While major veterans service organizations have applauded efforts to “right-size” the VA, they’ve opposed the commission-style process, comparing it to the Defense Department’s unpopular Base Realignment and Closure program.

But in their letter Monday, the veterans groups said the idea – as written in the spending bill -- had been improved.

“The current proposal includes meaningful stakeholder involvement, transparency and other safeguards… to ensure that the final result will lead to a stronger, more focused, better aligned VA,” they wrote.