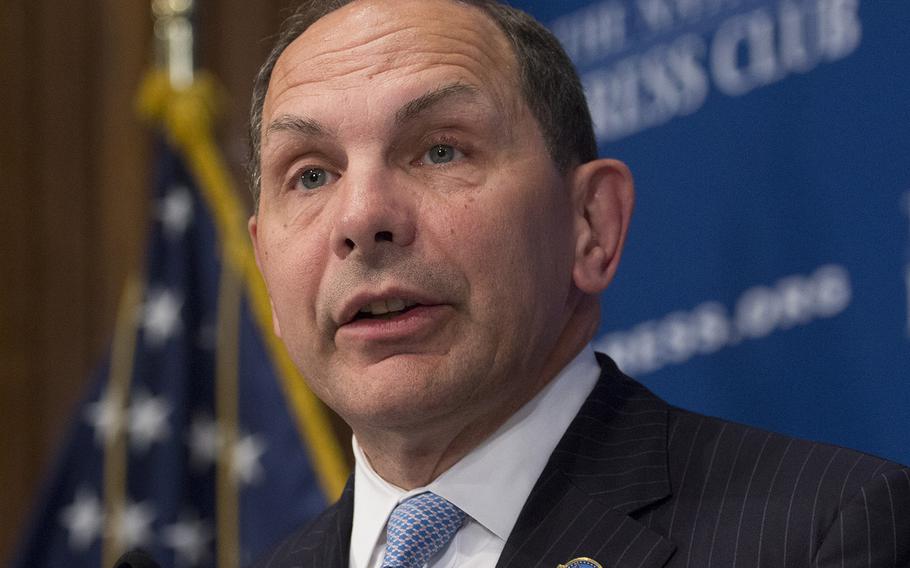 WASHINGTON -- Department of Veterans Affairs Secretary Bob McDonald pushed back Friday against increasing criticism from lawmakers, putting the onus on Congress to pass legislation to aid revamping the beleaguered agency.

“I’ve suggested to the chairman and ranking members of the House and Senate veterans committees that we hold a hearing on the MyVA transition rather than continue the barrage of hearings we’ve had on things that happened two years ago,” McDonald said in a speech at The National Press Club, referring to weekly congressional hearings on a variety of VA scandals.

MyVA is McDonald’s plan to reorganize and clean up the second-largest federal department, which has been grappling with a crisis in veterans’ health care and benefits for more than a year and a half. The crisis cost former VA secretary Eric Shinseki his job and placed a spotlight on mismanagement at VA hospitals and benefits offices across the nation.

The speech comes in the wake of a contentious House Committee on Veterans Affairs hearing Monday in which two VA directors accused of serious malfeasance appeared after receiving subpoenas. The directors invoked their Fifth Amendment right and refused to answer questions about their conduct.

While McDonald was direct in his challenge to Congress, he declined to wade into the debate over comments by Democratic presidential frontrunner Hilary Clinton that Republicans have attacked as minimizing problems at the VA.

“I told you we’ve made progress and we have more work to do,” he said in response to a written question from an audience member about the Clinton flap.

During his speech, McDonald laid out a list of accomplishments, including reducing the backlog in veterans disability claims and improving wait times, though the wait times numbers have been disputed.

Some veterans advocates have criticized the VA for hastily clearing claims by denying them and sending veterans to the appeals process, which has its own growing backlog. McDonald did point to the appeals process and an area where the VA still has much work to do and he also called on Congress to simplify appeals.

“The process is too complex, confusing, and lengthy,” he said.

Another area of concern McDonald mentioned was the difficulty VA hospitals are having recruiting health care professionals. He said he is increasing outreach to medical school deans and to Congress to authorize VA to offer more incentives, such as loan repayment.

“The growing shortage of qualified candidates is a national problem,” he said.