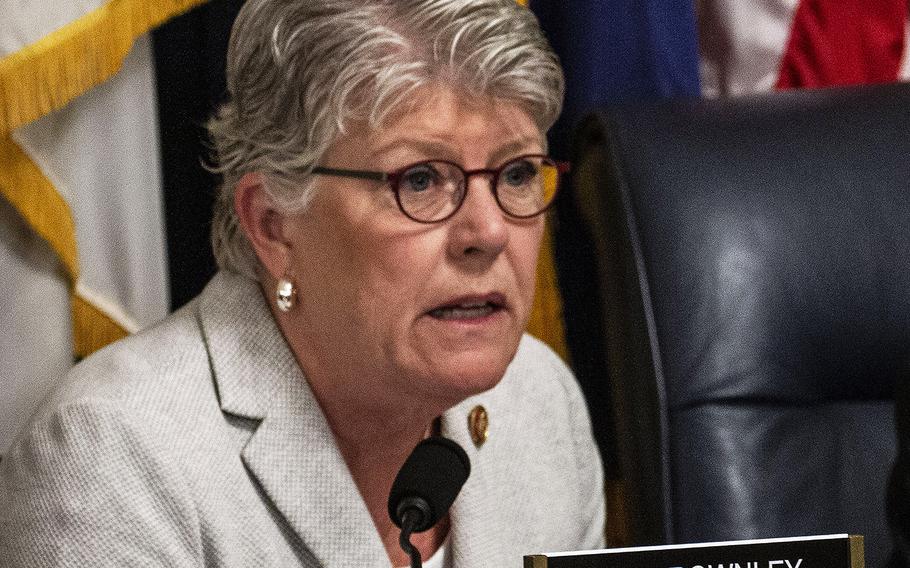 Rep. Julia Brownley, D-Calif., shown here at a hearing in 2018, called on VA Secretary Robert Wilkie "to prioritize reproductive care and expand medical care to include abortion and abortion counseling.” (Stars and Stripes)

WASHINGTON – The Department of Veteran Affairs’ nearly 30-year abortion ban received a critical look from lawmakers Tuesday, some of whom argued it was a “harsh” inequity for a growing number of female veterans.

A law passed by Congress in 1992 prohibits the VA from performing abortions or counseling women about them. On a VA webpage about women’s health services, the department states, “Please note that we cannot, by law, provide abortion services.”

“I call on Secretary Wilkie to prioritize reproductive care and expand medical care to include abortion and abortion counseling,” Brownley said.

She introduced the Reproductive Health Information for Veterans Act earlier this year, which would require the VA to provide abortion services.

Brownley, a member of the House Committee on Veterans’ Affairs, held a hearing Tuesday to address gaps in reproductive health care for female veterans, including the ban on abortion services, limited access to infertility care and a policy that requires veterans to provide copayments for birth control.

Kayla Williams, a senior fellow at the Center for a New American Security and the former director of the Center for Women Veterans, said Congress would need to take action on all three issues, rather than relying on the VA to intercede.

The VA “has neglected to take action for so long now that I believe they require congressional attention,” Williams said.

Williams focused on the abortion ban, in particular, arguing it was an “appalling” inequity for veterans. Women who benefit from other federal systems – including Medicare, Tricare, the Indian Health Service and the federal prison system – have more access to abortion services, Williams said.

“However we feel about abortion, we should not deny it to women veterans just because they use the VA and take away their ability to make important decisions about their health and futures,” she said.

Rep. Phil Roe, R-Tenn., the ranking Republican on the House Committee on Veterans’ Affairs, opposed any effort to lift the ban.

“I will oppose any effort the VA has to expand abortion,” Roe said. “I want to make that part of the record right now. I will oppose that with every effort in my body. I think we need to change hearts and minds. Life is a precious gift from God.”