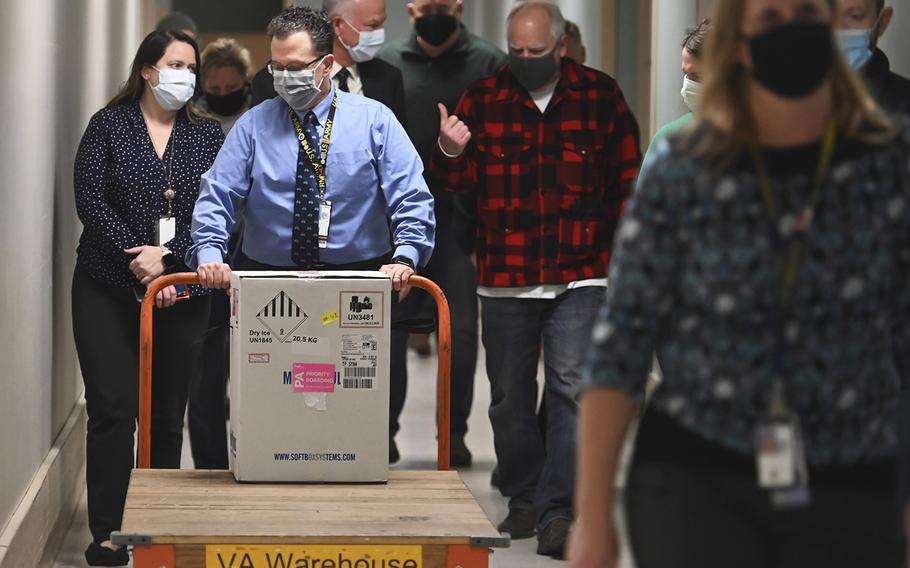 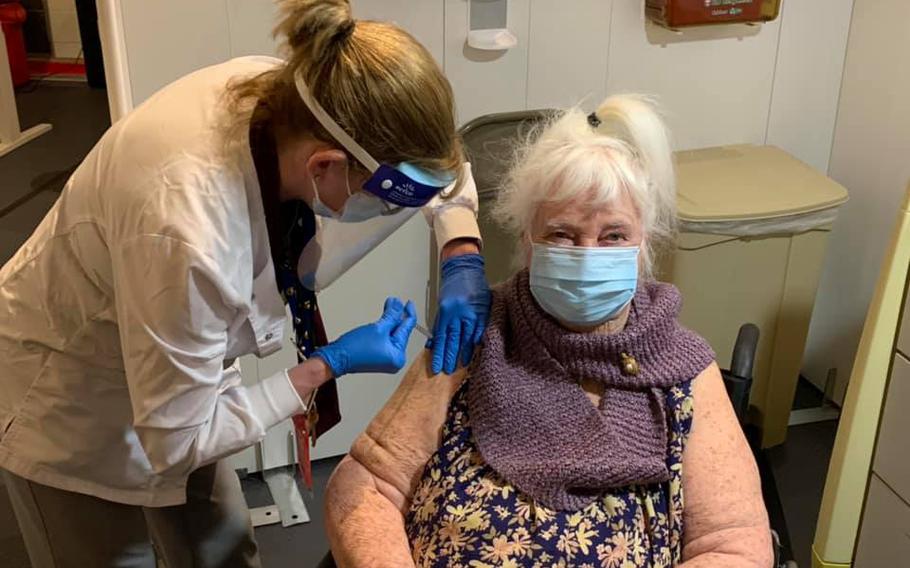 WASHINGTON — The Department of Veterans Affairs on Monday administered its first doses of the coronavirus vaccine as part of national inoculation effort to prevent the disease as the death toll from the virus surpassed 300,000 in the United States.

World War II Army veteran Margaret Klessens, 96, is the VA’s first patient to receive the vaccine, VA Secretary Robert Wilkie announced. She is a patient of the Bedford Healthcare System in Massachusetts. The Bedford VA system is a set of three clinics outside of Boston that has seen 473 coronavirus infections and 39 deaths, according to the VA.

The VA has 73,000 vaccines of the initial distribution, according to Christina Noel, a department spokeswoman. It is unclear when the department will get more doses.

Thirty-seven hospitals within the Department of Veterans Affairs have been selected to receive the first doses of the coronavirus vaccine, though VA officials are not confident that every veteran will have quick, easy access to the treatment.

The hospitals are mostly in areas with high veteran populations such as Washington D.C., Dallas, and Cleveland. Sites were chosen based on their ability to vaccinate large numbers of people, and most importantly, store vaccines in extremely cold temperatures, according to a statement from the department. The Pfizer vaccine must be frozen at 94 degrees below zero, a challenge for many hospitals across the country.

As of Monday afternoon, the VA reported nearly 17,757 active cases and 5,542 deaths among VA patients, as well as 79 employee deaths. Veterans are also a more vulnerable population to the virus being slightly more likely than the general population to be obese and have a compromised immune system from exposure to toxins such as Agent Orange and abusing substances such as alcohol, according to the VA. The Centers for Disease Control and Prevention has said a compromised immune system and obesity are key risk factors to death and serious illness.

The VA hospital in Cleveland has the most active cases, with 565. On Tuesday, it became one of six VA hospitals that have reported 100 or more coronavirus deaths at their facilities, joining East Orange, N.J.; New York City; Harlingen, Texas; Minneapolis, and Columbia, S.C. At least 102 veterans have died in Cleveland, as of Friday afternoon, according to VA data.

The VA’s data on cases and deaths does not include all veterans in the United States, nor does it include the hundreds of deaths that have occurred at state-run veterans’ homes.

“VA is well prepared and positioned to begin [coronavirus] vaccinations,” VA Secretary Robert Wilkie has said. “Our ultimate goal is to offer it to all veterans and employees who want to be vaccinated.”

Health care workers are generally set to be the first to receive vaccinations because they are at a high risk of contracting coronavirus and spreading it to vulnerable patients, VA said in a statement. The VA operates the largest health care system in the country, with more than 350,000 health care workers. The agency did not specify how many of them would be first in line to be vaccinated.

Veterans will receive the vaccine based on age, health conditions and other factors that might place them at a higher risk of severe illness or death from the virus.

Race and ethnicity will be taken into consideration by the VA when determining who should be vaccinated first. According to VA data, Black, Hispanic and Native American veterans are disproportionately affected by the virus, reflecting trends across the broader population.

On Wednesday, Richard Stone, executive in charge of the Veterans Health Administration, testified before the Senate Committee on Veterans’ Affairs that the agency will have difficulty giving the vaccine to all of its patients, specifically veterans in rural areas.

“The difficulty here is refrigeration,” he said. “We’ve looked into aircraft to go into rural areas and bring small amounts of vaccine in. I believe we’re going to need to have that kind of creativity and innovation to deliver this effectively and quickly.”

The VA won’t be able to reach all veterans with only the Pfizer vaccine, Stone predicted. The department has readied 200 sites to administer the Moderna vaccine and ordered 122,000 doses of it. The Moderna vaccine does not require ultra-low refrigeration. It’s slightly behind Pfizer in the approval process.

The VA also has ordered more refrigeration units, which will allow an additional 36 VA sites to have the ability to administer vaccines within the next two weeks, Stone told lawmakers. The department signed 87 contracts for dry ice, with the intention to use it to transport the doses to the 36 sites. The agency has also explored the idea of flying small amounts of doses into rural areas.

Because both vaccines require two doses in order to be effective, the VA is attempting to develop a system to track which veterans have received a vaccine and when they’re due for the second dose — something that will require a “Herculean effort,” Stone said.

The country has seen coronavirus run rampant with more states initiating more lockdowns and restrictions to contain the spread. There have been more than 16 million reported cases in the United States, according to Johns Hopkins University.

The 37 VA sites that will get the first doses of the coronavirus vaccine: