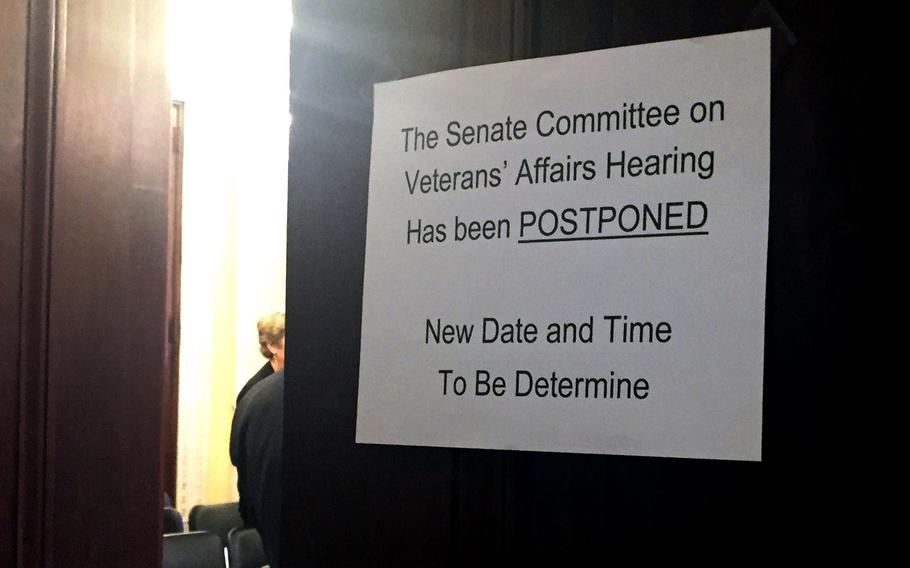 Buy Photo
A sign on the hearing room door tells of the postponement of a hearing on May 10, 2017. (NIKKI WENTLING/Stars and Stripes)

WASHINGTON – A Senate hearing regarding the future of the Veterans Choice Program was postponed Wednesday after Senate Democrats invoked a rule to prevent committees from meeting – a decision made in protest of the firing of FBI Director James Comey.

“Because of the decision last night by the president of the United States to terminate the director of the FBI and the questions that its raised, we gathered together and listened as our leader at least suggested a path for us to follow as an institution facing this constitutional question,” Durbin said on the Senate floor. “We believe it’s timely, and as a result of that, I object.”

It was unclear until soon before the scheduled meeting start-time of 2:30 p.m. whether there would be agreement from Senate Democrats to move forward with the Senate Veterans’ Affairs Committee hearing. Department of Veterans Affairs Secretary David Shulkin and others who were set to testify had already arrived on Capitol Hill. Committee staff posted a sign on the hearing room door announcing the postponement about 20 minutes before the hearing was scheduled to begin.

The disruption came after President Donald Trump fired Comey on Tuesday night, a move that prompted criticisms that Trump abused his power. Comey had been leading an investigation into Russia’s influence in the 2016 presidential election and whether there was any involvement of associates of Trump.

Democrats on Wednesday slowed work in the Senate to call for an independent investigation into the matter.

Sen. Jerry Moran, R-Kan., who is a member of the VA committee, criticized the Democrats’ method of protest and accused them of “playing a political game.”

Senate VA committee staff was attempting Wednesday afternoon to find a new date to hold the hearing. The topic – the future of the Veterans Choice Program – is a key issue facing the VA.

The program allows veterans to receive health care in the private sector if they can’t get a timely appointment through the VA or they live too far from a VA facility. Congress created the program in 2014 and funneled $10 billion into it.

The choice program was intended to be temporary, but Congress passed legislation last month removing its expiration date — with the caveat that the program be improved.

Members of the veterans community have criticized the program for being complex and confusing, and Shulkin has said it’s too bureaucratic. Shulkin said he plans to unveil a reformed program, Choice 2.0, this fall. The new program would need to pass through Congress by the end of 2017, before the current program runs out of funding, he said.

Shulkin has so far offered few details on how he’s proposing the program change.

Besides hearing from Shulkin about reform plans, the committee was supposed to gain input Wednesday from representatives of four major veterans organizations.

Shulkin is scheduled to testify Thursday morning to a subcommittee of the Senate Committee on Appropriations about the choice program.

It’s unclear whether Democrats will invoke the two-hour rule again Thursday. Regardless, the rule does not apply to the appropriations committee.

The hearing will be led by Moran, who chairs the subcommittee.