VA has denied about 78% of disability claims from burn pits 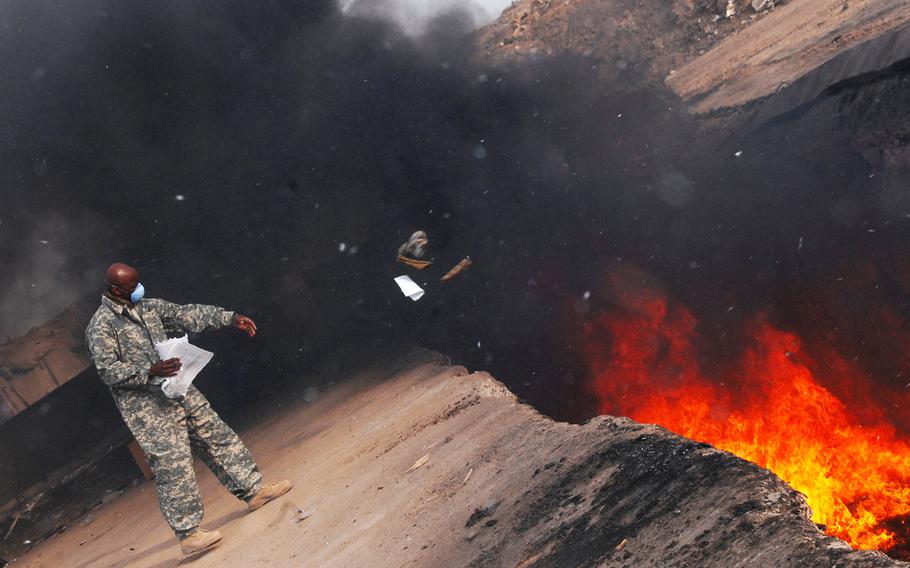 WASHINGTON — The Department of Veterans Affairs has denied about 78% of disability claims related to toxic exposure, as thousands of veterans seek care from the agency for illnesses that they believe were caused by serving overseas near burn pits, an agency official said Wednesday.

Between 2007 and 2020, VA approved disability claims related to burn-pit exposure for 2,828 veterans out of 12,582, according to Laurine Carson, deputy executive director of policy and procedures for VA.

The gap in veterans who are approved for benefits drew the ire of lawmakers who argued the VA should give presumptive care for veterans, saying the agency does not have clear guidelines for who gets burn-pit compensation.

“Many people are saying this is the Agent Orange of the post-9/11 generation,” Rep. Elaine Luria, D-Va., chairwoman of the House Committee on Veterans’ Affairs subpanel on disability assistance and memorial affairs, said Wednesday during a hearing on the matter.

“We are now seeing young veterans in their 20s or 30s suddenly debilitated by cancers they would not reasonably contract unless they were heavy smokers or deep into old age,” Luria said. “We may not have all the answers on burn-pit exposure, if ever. What we do know is that it’s making people very sick. I can’t tell these people to sit down to wait another 10 years because quite frankly, some of them might not have another 10 years.”

Through the 1990s and the post-9/11 wars, the military used open-air pits in order to burn garbage, jet fuel, paint, medical waste, plastics — and in the cases of some small combat outposts, human waste. Veterans contracting cancers, respiratory issues and lung diseases at young ages largely have blamed exposure to toxic fumes for the illnesses. However, the VA has contended there is not sufficient evidence to support those claims. The agency also has said if burn-pit care were expanded, the volume of patients would create enormous costs.

“We’re still in the process of study,” Carson told lawmakers.

Carson said one of the prime reasons veterans are being rejected for disability related to toxic exposure is the time between their service and when they try to make a claim.

“They come with a respiratory condition today, but they served 10 years ago,” Carson said. “Some of the challenges are finding the link between that in-service event and their current condition because there are all types of intervening issues or exposures that may have happened as well.”

Officials have said the VA confirms disability claims with the Defense Department on whether they served near burning garbage. However, it is unclear how DoD decides that. More than 200 burn pits have been used around the world for decades, and it is unlikely that all burn pits on small outposts in places such as Afghanistan or makeshift burn pits are cataloged.

It is also unclear how much further research the VA needs to make a concrete policy on burn-pit care and compensation. Dr. Patricia Hastings, deputy chief consultant of post-deployment health services for the VA, said veterans won’t have to “wait 40 years” for action like the battle for benefits that Vietnam War veterans fought for disability related to exposure to Agent Orange.

A new report sponsored by the VA published earlier this month by the National Academic of Sciences, Engineering, and Medicine found there is insufficient evidence to determine whether U.S. troops’ exposure to burn pits in combat zones is linked to respiratory issues and stated there need to be further studies.

Veteran advocates, some lawmakers, and former VA secretary David Shulkin have urged the VA to make it easier for veterans by giving presumptive care, meaning if a veteran operated around a burn pit and later contracts an illness related to toxic exposure such as cancer, chronic bronchitis or chronic obstructive pulmonary disease, they would get disability benefits and care.

“The scientific evidence everywhere is clear, these [burn pits] cause health hazards. Why is it so difficult for us to get the VA to understand,” said Rep. Mike Bost of Illinois, the ranking Republican on the House VA subpanel. “We have the evidence over and over and I feel we’re beating a dead horse … we’re continuing down this rat hole when we should already be in the situation of taking care of veterans. The VA says they aren’t sure. Everybody else in the world is sure.”

Kristen Rouse who is an Afghanistan War veteran and president and founding director of the NYC Veterans Alliance, an advocacy group, said she served multiple deployments during which she was exposed to toxic fumes from burning garbage. However, an emergency room doctor at a VA in the Bronx, N.Y., in 2015 told her that he had never heard of burn pits when she arrived at the hospital struggling to breathe.

She encountered a similar issue at a VA in Brooklyn, N.Y., when her primary care doctor also had little information on burn pits.

“I explained to the provider what a burn pit is, what the health effects are — essentially gave her my spiel that I’ve given to legislative staff who are new to the issue,” said Rouse, 47.

Last week, Jon Stewart, the former host of “The Daily Show,” backed a bill from Rep. Raul Ruiz, D-Calif., and Sen. Kirsten Gillibrand, D-N.Y., that would streamline the process of obtaining VA benefits for burn-pit and toxic exposure through presumptive care for any veteran who deployed to parts of the Middle East, Southwest Asia and Africa since 1990. Presumptive care would lift the burden of proof for veterans because proving burn-pit exposure for some veterans could be difficult.