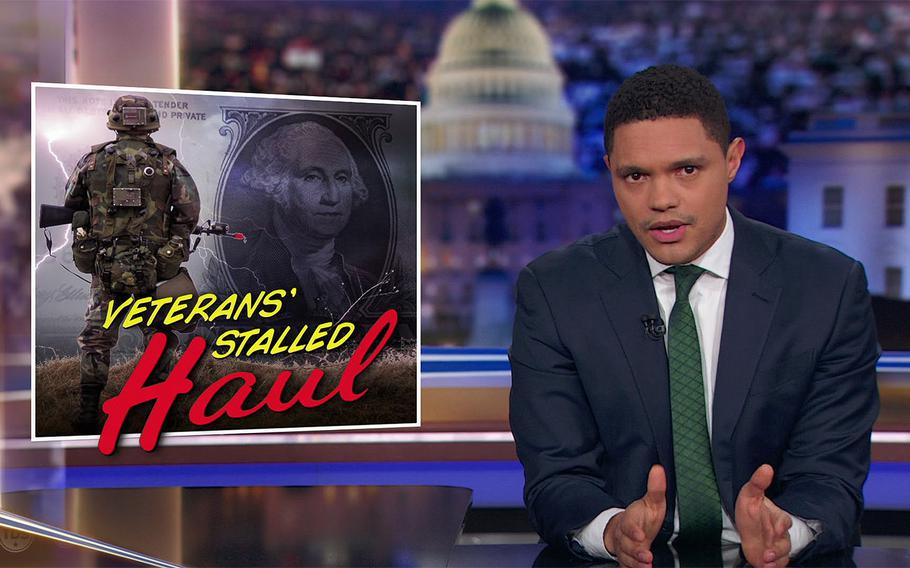 WASHINGTON – Trevor Noah, host of The Daily Show on Comedy Central, blasted the Department of Veterans Affairs in a five-minute segment Thursday night over widespread payment delays to student veterans.

Thousands of student veterans experienced delays this semester receiving their monthly housing stipends, which they use for rent, food and other living expenses. The problem was caused by an information technology failure when the VA went to implement part of the “Forever” GI Bill – a major expansion of veterans’ education benefits Congress approved last year.

“There’s a promise America makes to its troops: If you serve your country, when you come home, your country will serve you,” Noah said. “These days, collecting those benefits have become its own battle.”

VA officials testified earlier this month that the problems arose when attempting to add new commands into the VA’s 50-year-old computer system, which the agency has been making patchwork fixes to for decades.

“Seriously? America can’t pay its veterans because it’s using a 50-year-old computer? That is some old-ass shit,” Noah said. “When it comes to going to war, America always finds the money… But when the soldiers get home, America is all of the sudden like, ‘Yeah, we can’t pay you. Our computers are running Windows B.C., so sorry.’”

At the end of the segment, Noah joked, “America should be grateful the VA isn’t in charge of the rest of the military.” He then cut to a skit of servicemembers trying to launch a missile but having to wait 12 hours because they were using a 50-year-old computer.

The Daily Show also delved into the controversies that arose this week about whether GI Bill recipients who were underpaid this semester would receive retroactive payments.

Because of the IT problems, the VA reverted to paying students their housing allowances this semester based on 2017 rates that didn’t account for cost-of-living increases in 2018. Veterans and lawmakers didn’t know whether students who received less money because of it would get paid retroactively.

VA officials said they will make retroactive payments and the agency plans to send those out to students sometime in January.

There were still outstanding questions Friday about whether veterans who will be shortchanged for other reasons during the next year will eventually get the money they’re due.

“This issue with the vets might be solved eventually, but this is just the latest example of the VA screwing over those who have served their country,” Noah said.

Thursday wasn’t the first time The Daily Show has criticized the VA.

Jon Stewart, the television show’s previous host, blasted former President Barack Obama’s administration in 2013 over the high number of veterans waiting for answers on their claims for benefits. The VA was also the subject of multiple segments in 2014 and 2015 during the VA wait-time scandal.