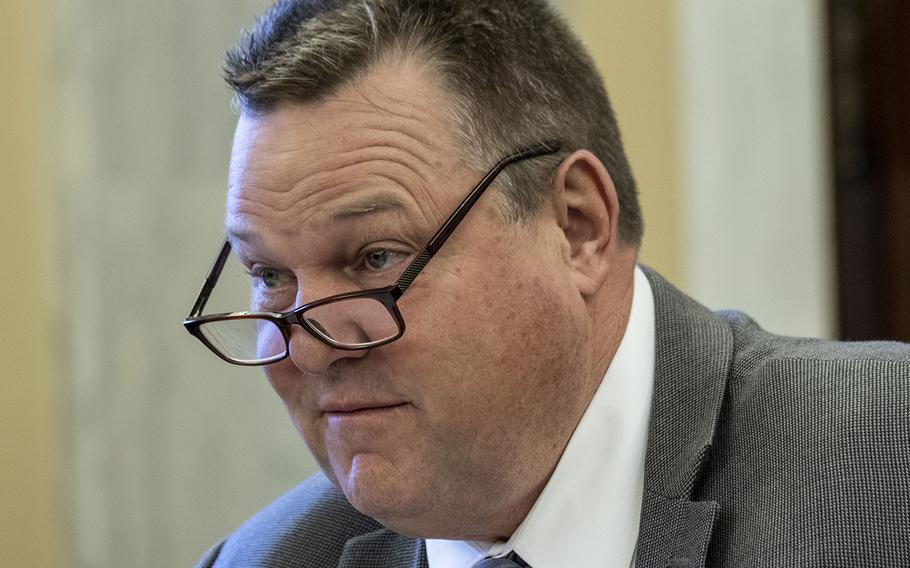 Tester sent a letter Friday afternoon to Department of Veterans Affairs Secretary Robert Wilkie, asking him to “put politics aside” and release the 2020 National Veteran Suicide Prevention Annual Report to Congress immediately. The report is typically released in September to coincide with National Suicide Prevention and Awareness Month.

Tester also asserted that the VA and the Department of Housing and Urban Development were waiting until after the election to publish their annual estimate of veteran homelessness in the United States.

“We are now just days away from the 2020 election and it appears the administration is withholding vital information on veteran suicide and veteran homelessness from Congress and the public,” Tester wrote. “It is disheartening that reports detailing some of the biggest issues facing veterans are being treated in a political manner by the administration.”

VA Press Secretary Christina Noel said Friday the report would be released "in the next few weeks." The report was delayed because the department plans to include "a variety of COVID-related data," she said. The VA did not specify what type of coronavirus-related data would be included in the report, which focuses on veteran suicides in 2018.

“This is inaccurate,” McEnany said. “President Trump always puts the best interest of our veterans first. He has fixed the broken VA that Obama/Biden left behind, and he has offered real, meaningful health care choice to our veterans.”

Each year, the VA and HUD perform a point-in-time count of America’s homeless population. Tester said that Congress was explicitly told by VA staff that HUD was waiting until after the election to release results of the count.

“There is no logic in that timeline, unless administration political appointees are too busy working to re-elect Republicans and the president, rather than finalizing and releasing this report to the public or are concerned about the optics of potentially bad data,” Tester wrote. “Either way, it is appalling that VA appears to prioritize playing political games over information that can save veterans’ lives.”

Regarding the annual veteran suicide report, Congress has been given no firm release date.

Rep. Mark Takano, D-Calif., chairman of the House Committee on Veterans’ Affairs, sent a letter to Wilkie on Oct. 14, saying he was “dismayed” about the delay of the report and the VA’s reluctance to give a reason for it. He requested a briefing about the results of the report before Nov. 1 if the statistics hadn’t been released by then. A briefing never happened, Takano’s office said Friday.

Last year, the report showed that on average, 20 veterans and members of the National Guard and Reserve died by suicide every day in 2017.

Veteran suicides had increased from the previous year and continued to be disproportionately higher than the rest of the population, the report shows. Rates were highest among young veterans ages 18 to 34.

The data in the annual suicide reports are used by veteran services organizations and lawmakers to fully understand the scope of the suicide crisis plaguing the veteran community. They’re used to gauge which legislative efforts should take priority, and to provide critical oversight of the VA — the federal government's second-largest agency. "Timely and accurate data from the VA is essential to understanding the success or failure of the national fight to stop the persistent rise in veteran suicide,” said Jeremy Butler, CEO of Iraq and Afghanistan Veterans of America. “The best tool that we can have is accurate information about those who have died by suicide so that the experts can accurately determine where and how to direct resources and attention to finally bring an end to this national tragedy." This year’s report is supposed to reveal veteran suicide data for 2018. President Donald Trump signed an executive order at the beginning of that year to allow service members to be enrolled automatically in VA mental health care for one year after they leave the military. The change was intended to eliminate treatment barriers for transitioning troops during their first year after service. Veterans who use VA services are less likely to succumb to suicide than other veterans, VA data shows.

However, 30 Senate Democrats criticized the department last week, claiming that promises made with the 2018 order were never fulfilled. VA Press Secretary Christina Noel argued the order was implemented in full and said the agency has been more proactive to inform transitioning service members about their eligibility for VA health care and benefits. She did not say, though, whether transitioning troops were being automatically enrolled in VA health care.

The leaders of AMVETS, a national veterans organization, said the Democrats’ claims have led them to worry about the implementation of other government-led suicide prevention efforts.

“This is extremely troubling and would make anyone with a vested interest in our military, veterans and their health care rightfully question the substance behind any executive order signed in the future,” AMVETS National Director Joe Chenelly said.

The House and Senate VA committees, as well as the department itself, have set suicide prevention as a top priority. Last month, Congress approved the sweeping, bipartisan “Commander John Scott Hannon Veterans Mental Health Care Improvement Act of 2019.” The measure intends to give $174 million during the next five years to state and local organizations that provide suicide-prevention services to veterans and their families. In June, the White House unveiled a strategy to prevent veteran suicides — the President’s Roadmap to Empower Veterans and End a National Tragedy of Suicide, or PREVENTS.

The plan focuses on improved research into veteran suicide, increased suicide-prevention training and new partnerships between government agencies and outside organizations. Some veterans groups and lawmakers have criticized the plan for not being bold enough. Sherman Gillums, chief advocacy officer for AMVETS, said the impact of PREVENTS so far “hasn’t lived up to expectation.” “The roadmap for preventing suicide at all levels remains in the abstract, with no real practical application,” he said. Despite efforts in Washington and continued boosts to VA funding, the rates of veteran suicide have shown no sign of slowing. Between 2005 and 2017, 78,875 veterans took their own lives — more than the number of Americans killed in each major conflict except for World War II and the Civil War. According to last year’s VA report, the suicide rate among male veterans was 1.3 times the rate for other adult men in 2017. For women, the contrast is even more stark. The rate among female veterans was 2.2 times the rate for other adult women that year. Experts have voiced concerns about a possible increase in suicides this year because of the social isolation, unemployment, fear and anxiety caused by the ongoing coronavirus pandemic. The VA has encouraged veterans to stay active and keep their mental health appointments during the pandemic, as well as to keep firearms and medications safely stored when they’re not in use. It’s uncertain whether the outreach is working. The department’s annual suicide reports are on a two-year lag, meaning the suicide rates in 2020 are likely to be released by the VA in 2022.