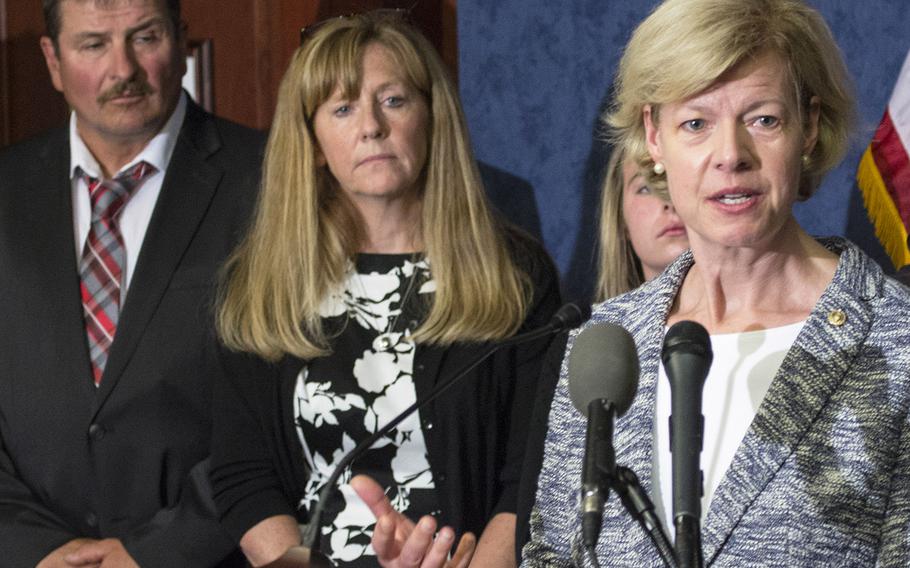 In a 2015 photo, Sen. Tammy Baldwin, D-Wis., speaks about the Jason Simcakoski Memorial Opioid Safety Act at an awareness event in Washington, D.C. Behind her at left are Marv and Linda Simcakoski, parents of Marine Cpl. Jason Simcakoski, who suffered a fatal overdose while an inpatient at the Tomah Veterans Affairs Medical Center in August 2014. (Stars and Stripes)

In a 2015 photo, Sen. Tammy Baldwin, D-Wis., speaks about the Jason Simcakoski Memorial Opioid Safety Act at an awareness event in Washington, D.C. Behind her at left are Marv and Linda Simcakoski, parents of Marine Cpl. Jason Simcakoski, who suffered a fatal overdose while an inpatient at the Tomah Veterans Affairs Medical Center in August 2014. (Stars and Stripes) 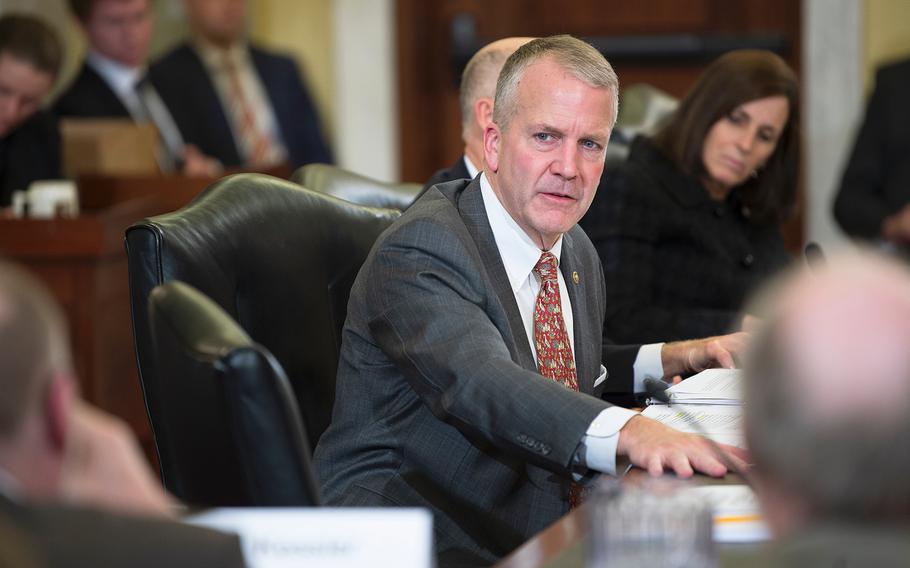 WASHINGTON – A measure introduced in the Senate on Thursday aims to create a better understanding of the connection between veteran suicides and prescription drugs.

Sens. Tammy Baldwin, D-Wisc., and Dan Sullivan, R-Alaska, introduced the Veteran Overmedication Prevention Act of 2019, which would require the Department of Veterans Affairs to conduct an independent, expert study on VA patients who died by suicide or from a drug overdose during the past five years. Baldwin said the intent is to determine whether there’s a direct correlation between veteran suicide and a potential overprescribing of medication.

“We lose too many veterans to suicide and drug overdoses,” Baldwin said. “And there’s certainly the strong potential for a linkage there that we want the VA to be fully aware of and research.”

An average of 17 veterans and 3 service members die by suicide each day, according to the latest suicide report released by the VA in September.

The drug overdose rates among veterans are also higher than the rest of the population by about double, VA Secretary Robert Wilkie said last month in a statement.

A University of Michigan study released earlier this year found opioid overdoses among veterans increased from about 14.5 per 100,000 people in 2010 to 21 per 100,000 in 2016. The study found an increase in deaths because of heroin and synthetic opioid use.

Baldwin has been monitoring the VA’s opioid prescription rates since 2016, when she helped pass legislation that requires the agency to report the rates to Congress. The Jason Simcakoski Memorial Opioid Safety Act was named for a Marine veteran who died at the Tomah VA hospital in 2014 of “mixed use toxicity.”

Baldwin said she has seen a significant reduction in prescribing rates across the VA system.

“The trend lines are all going in the right direction, but… it doesn’t give us all the answers we need about suicide prevention,” she said. “The VA has never done an independent, expert review of the relationship between death by suicide and death by overdose. And it’s something we really need to know.”

Baldwin introduced the same legislation in 2017 with the late Sen. John McCain, R-Ariz. It was referred to the Senate Committee on Veterans’ Affairs at the time, but progress stalled.