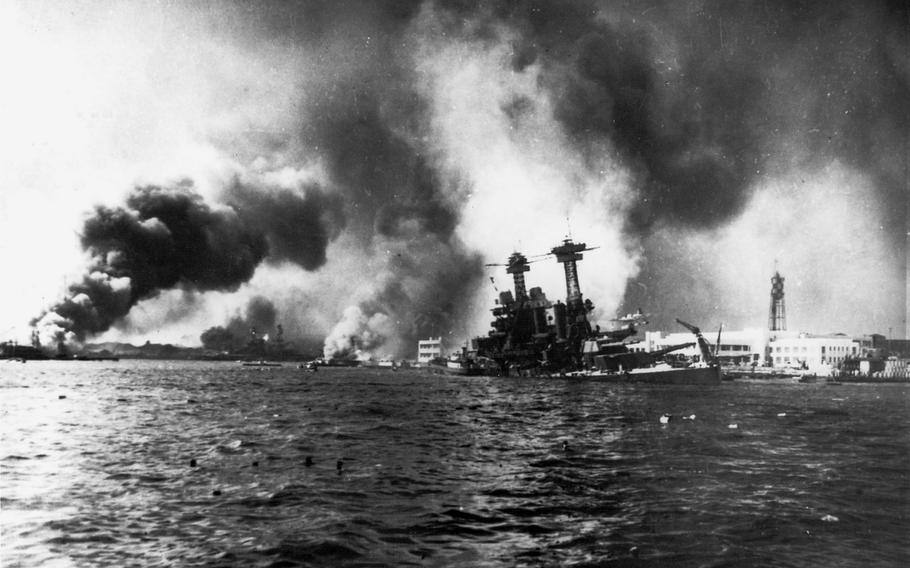 The U.S. Navy battleship USS California slowly sinks alongside Ford Island, Pearl Harbor, Hawaii, as a result of bomb and torpedo damage, December 7, 1941. The destroyer USS Shaw is burning in the floating dry dock YFD-2 in the left distance. The battleship USS Nevada is beached in the left-center distance. (U.S. Navy)

The U.S. Navy battleship USS California slowly sinks alongside Ford Island, Pearl Harbor, Hawaii, as a result of bomb and torpedo damage, December 7, 1941. The destroyer USS Shaw is burning in the floating dry dock YFD-2 in the left distance. The battleship USS Nevada is beached in the left-center distance. (U.S. Navy) 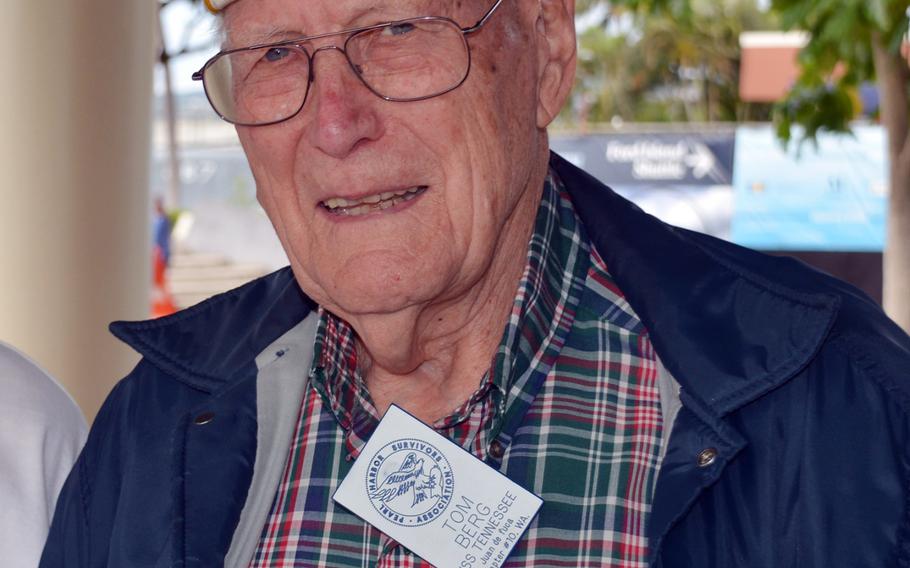 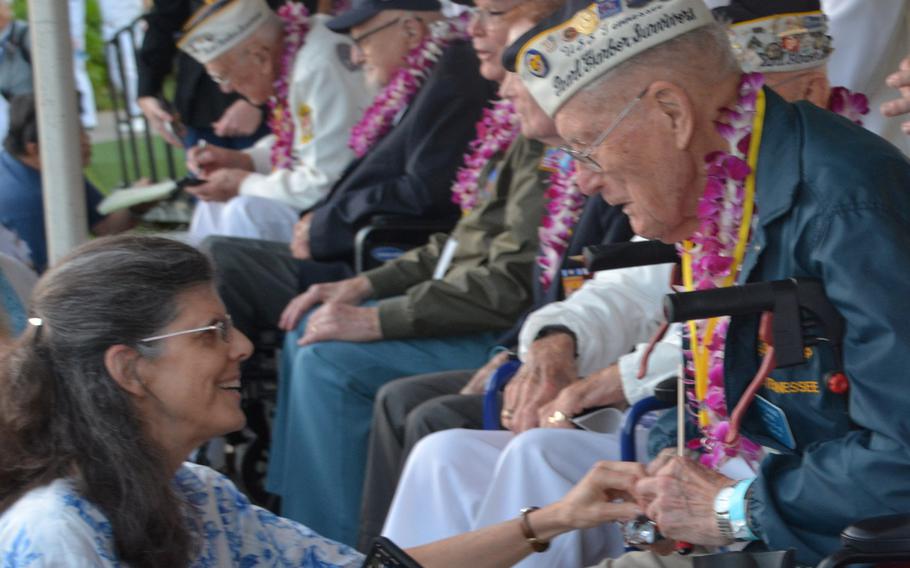 Buy Photo
Flanked by fellow survivors of the 1941 attack on Pearl Harbor, Thomas Berg talks with his wife, Lesa Barnes, before the start of a commemoration of the event in Hawaii, Dec. 7, 2019. (Wyatt Olson/Stars and Stripes)

Two former sailors who survived the Japanese surprise attack on Pearl Harbor in 1941 while aboard battleships died in recent days, one of whom was grand marshal this past December in the annual parade in Honolulu commemorating the attack.

Daniel R. Kramer, 103, of Clinton, Iowa, died Monday at an assisted-living facility in that town, according to an obituary posted by Snell-Zornig Funeral Homes.

He was aboard the USS California on the morning of the massive Japanese raid that badly crippled America’s Pacific Fleet.

Thomas Berg, 98, of Port Townsend, Wash., died April 24, according to an obituary in The Leader newspaper. He was aboard the USS Tennessee at the time of the attack.

Berg, born July 19, 1922, was a regular face at the annual Dec. 7 observances at Pearl Harbor, Hawaii. In December he served as grand marshal for the annual parade, which he had ridden in each year since 2011.

During the 2018 commemoration, Berg recounted for Stars and Stripes how he had joined the Navy right out of high school in 1940 and had been assigned below deck in Boiler Room 7 on the USS Tennessee on the morning of the attack. The ship was moored on Battleship Row beside the USS West Virginia.

He was walking the deck for some fresh air before heading to the boiler room for the day’s work, then stopped into his living quarters. Moments later, a clarinet player from the morning-colors band raced in, shouting that the Japanese were bombing.

“Everybody reeled back and thought he’d gone berserk,” Berg said.

Below deck in the boiler room, Berg’s job was to communicate by radio with a sailor on the navigation bridge.

“He was describing what was going on,” Berg said. “He told us when the Oklahoma turned over, when the West Virginia was sinking and listing.”

When the [USS] Arizona’s magazine blew up, the repercussion drove smoke down the Tennessee’s pipes into the boiler room, burning off the eyebrows of some men, Berg said. The Tennessee’s stern was engulfed in flames from the Arizona’s burning fuel oil.

“I was scared stiff,” he said.

Berg went on to submarine duty during World War II and was discharged in 1946, according to his obituary. He earned a degree in mechanical engineering, and in the late 1960s was a test engineer for the Mark 45 torpedo at Naval Torpedo Station-Keyport. He retired in 1977.

He is survived by Lesa Barnes, his wife of 21 years, three children from his first marriage, seven grandchildren and seven great-grandchildren.

Kramer headed for his battle station on the USS California when the general quarters alarm was sounded the morning of the attack, he told the Clinton Herald newspaper several years ago.

“We did not get underway before we were attacked by bombs and torpedoes,” he said. “The battleship slowly sank in the water where the main deck was under water, but the rest of the battleship was not. It was a total surprise.”

Almost 100 men died aboard the California.

Kramer was discharged as a lieutenant commander in 1946. He returned to Clinton where he worked for E. I. DuPont for 32 years.