One year after Phoenix, the VA is under more scrutiny than ever 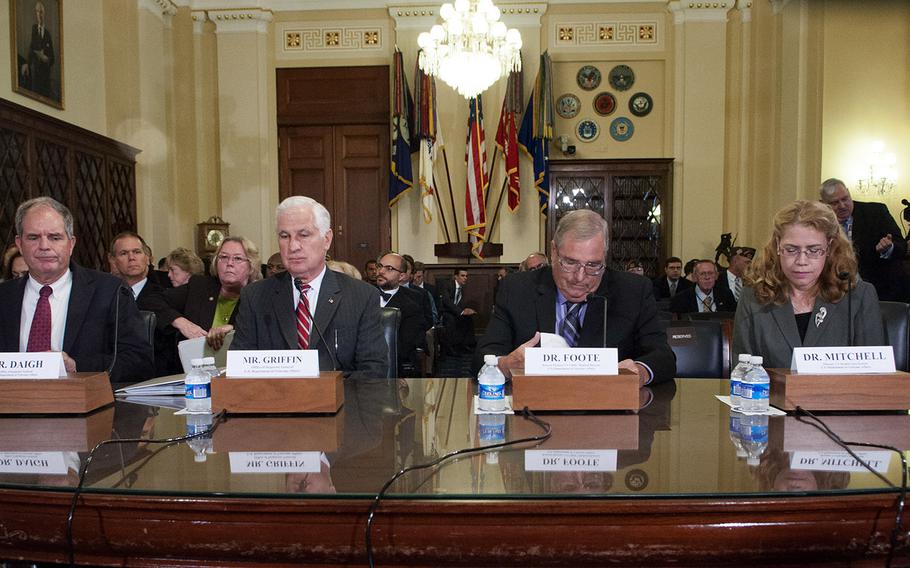 One year after revelations that a VA hospital was denying veterans care and falsifying data to hide it, the federal agency tasked with looking after Americans who have served in the military is under more scrutiny than ever, with many growing impatient with pace of the agency’s overhaul.

“I’m incredibly disappointed with the lack of progress,” said Katherine Mitchell, a Phoenix VA doctor whose reporting last spring helped expose what turned out to be a nationwide crisis in veterans’ health care.

The scandal started in earnest last April, when House Veterans Affairs Committee Chairman Rep. Jeff Miller, R-Fla., said during a hearing that veterans may have died while awaiting care in Phoenix and that the hospital may have two sets of records to conceal wait times. Both allegations turned out to be true.

Phoenix, though, was just the beginning.

News of that hospital’s malfeasance led to the discovery of similar horror stories at VA hospitals throughout the country: poor care, unexpected deaths, understaffing, over-prescription of narcotics, construction debacles. One year later, new failures are documented every week.

As the VA chips away at a long-standing backlog in disability claims, the backlog for appeals of denied claims is growing. More than 300,000 appeals are pending as of January, according to the VA. Nationally, the average length of time to receive a decision on an appeal is 1,255 days — nearly 3½ years. The wanton dispensing of narcotics at a Wisconsin hospital earned it the nickname “Candy Land.” Patients at the Tomah Medical Center were 2.5 times more likely than the national average to receive high doses of opiates. Six congressional hearings have been held this year to discuss overmedication and abuse of authority at the Tomah VA. The Choice Card program that enables veterans who live far away from a VA or face 30-day or more wait times to access private care was quickly labeled as flawed. The restrictive 40-mile rule has already been eased. Construction of a medical center in Aurora, Colo., is more than $1 billion over budget, costing more than twice as much as the heavily fortified U.S. Embassy in Baghdad. Congressional leaders are threatening to withhold funding until someone takes responsibility for the overruns and delays. Just this week, Miller suggested the VA should consider selling the hospital. Reports of retaliation against VA whistleblowers continue, despite VA leaders saying that retaliation will not be tolerated. More than 25 whistleblowers have received legal settlements, but 120 active investigations remain, according to Miller’s office. The scandal cost former VA Secretary Eric Shinseki his job, and former Procter & Gamble CEO Bob McDonald replaced him in late July, accepting what some see as the most unforgiving job in government — reform and reorganization of the second largest and most dysfunctional department in the federal government. When he’s not being hauled in front of occasionally hostile lawmakers to discuss the VA’s myriad problems, he faces an entrenched bureaucracy that is resistant to change and rules that make it difficult to fire people in his own department.

In an interview with Stars and Stripes, McDonald acknowledged that his department still has a long way to go in its reforms, but he pointed to shorter wait times, a shrinking disability claims backlog, and an effective effort to lower veterans’ homelessness as signs of success.

“Give us a try,” he said. “In my first national press conference last September I gave out my cell phone number and I get calls from hundreds of veterans every single day. Now, I’m getting roughly 35 percent of the calls …where the message I’m getting is, ‘You changed my life, you helped me get in.’”

So far even the staunchest critics of the VA’s reforms are sticking by McDonald, though there’s a rising call for him to fire more of those responsible for the problems.

“No one thought the department’s problems would magically disappear upon the appointment of a new secretary,” Miller said in an email response to Stars and Stripes. “But it’s been a year since the scandal broke, and the department is still facing challenges with transparency, protecting whistleblowers and conveying accurate information to the public. It’s simply naïve to think these issues will subside in the absence of the thorough housecleaning the department desperately needs.”

Mitchell, who was given compensation and a new job from the VA after administrators at the Phoenix VA retaliated against her for speaking out, has become a go-to person for VA employees who want to report wrongdoing.

“They’re very scared of retaliation,” she said. “The culture has not changed.

Asked about that persistent fear, McDonald said he expects more employees to receive compensation for maltreatment, and he encouraged whistleblowers facing retaliation to call him on his cell phone, a number he has given out publicly.

“We will not tolerate retribution,” he said. “We cannot improve unless we have people criticizing [us].”

Much of the leadership implicated in wrongdoing throughout the VA system is still in place or on paid leave, which has been especially irksome to veterans advocates, lawmakers and whistleblowers. Only a handful of those at the center of the scandal have left, and many were able to retire, keeping generous pension packages.

“Sometimes I think there’s a little more damage control than appetite to overhaul the system,” said Pete Hegseth, CEO of the conservative veterans group Concerned Veterans for America and one of the staunchest critics of the VA’s handling of the crisis.

While senior leaders played a large role in fueling the toxic atmosphere of the VA, some advocates worry the misdeeds of relatively few leaders is taking focus away from a dire need to reform the culture of the mid-level bureaucrats and administrators who have more direct interaction with patient care.

“The secretary has made an attempt to do that at the higher levels, but we find the problem really lies in what we call the frozen middle,” Veterans of Foreign Wars senior legislative associate Carlos Fuentes said. “Some of them even feel they can wait out the secretary or the [public] focus on the access crisis.”

One year later, veterans are still waiting too long for care, but the ongoing scrutiny has forced even reluctant administrators to improve their practices. Keeping up that pressure is key to continued improvement, American Legion Executive Director Verna Jones said.

“The curtain’s been lifted,” she said.