Young authors say their parents are their heroes 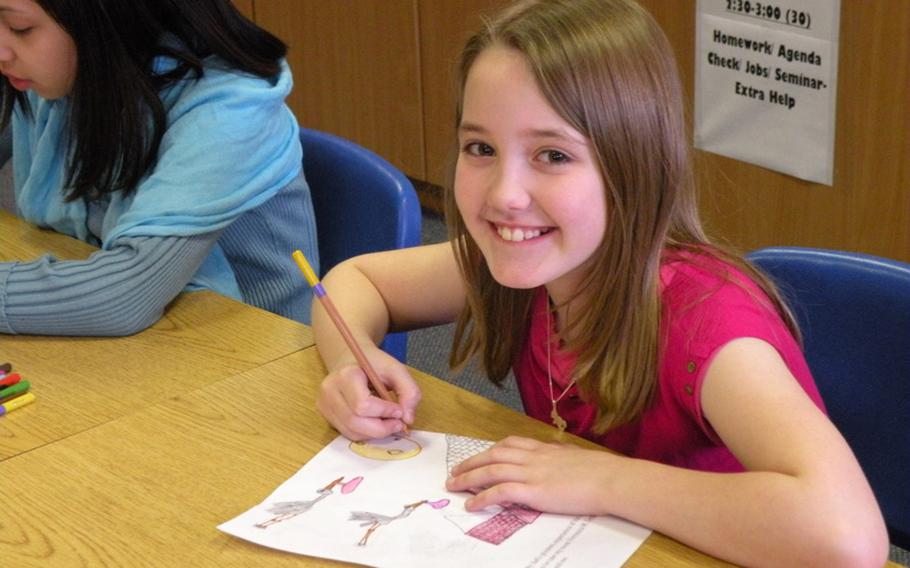 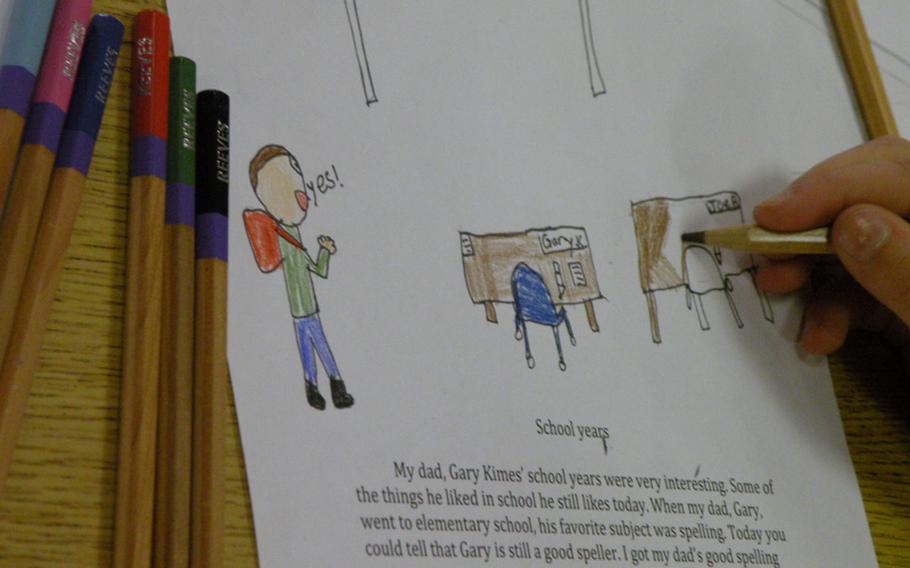 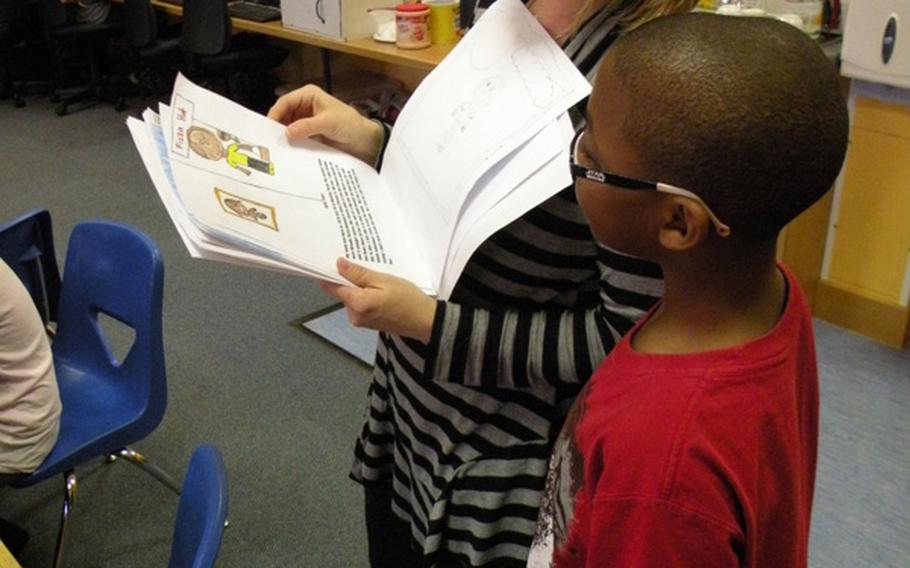 Buy Photo
Teacher Karen Griffis reviews the book created by Torence Davis during a work session on March 24 at Feltwell Elementary School. The books were presented to the public at an authors' tea on April 6 and 7. (David Hodge/Stars and Stripes) 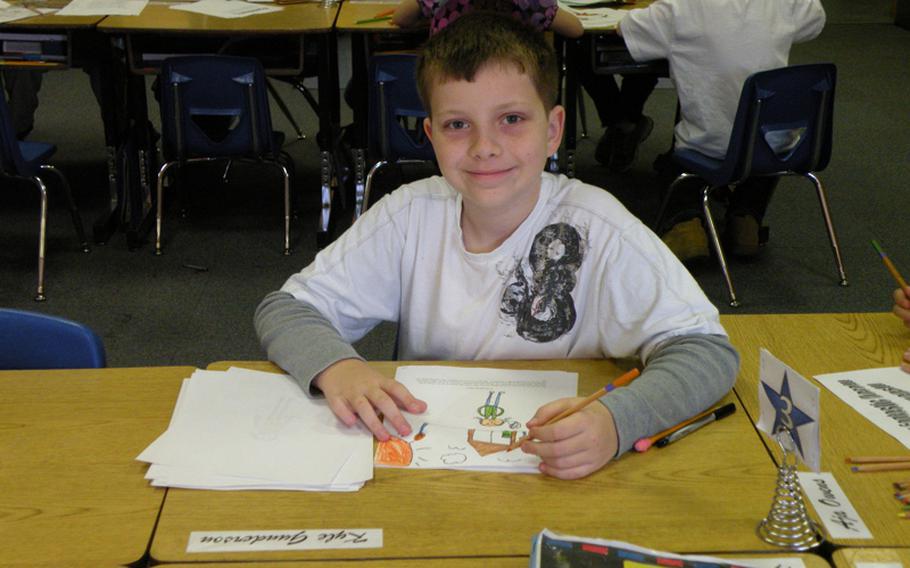 Buy Photo
Kyle Gunderson takes a break from coloring a picture he drew while putting together a book about his local hero, Mandy Kumiyama, at Feltwell Elementary School in England. Twenty-two students from Karen Griffis' class held an authors tea, April 6 and 7, to publicly recognize their heroes and read their reports. (David Hodge/Stars and Stripes) 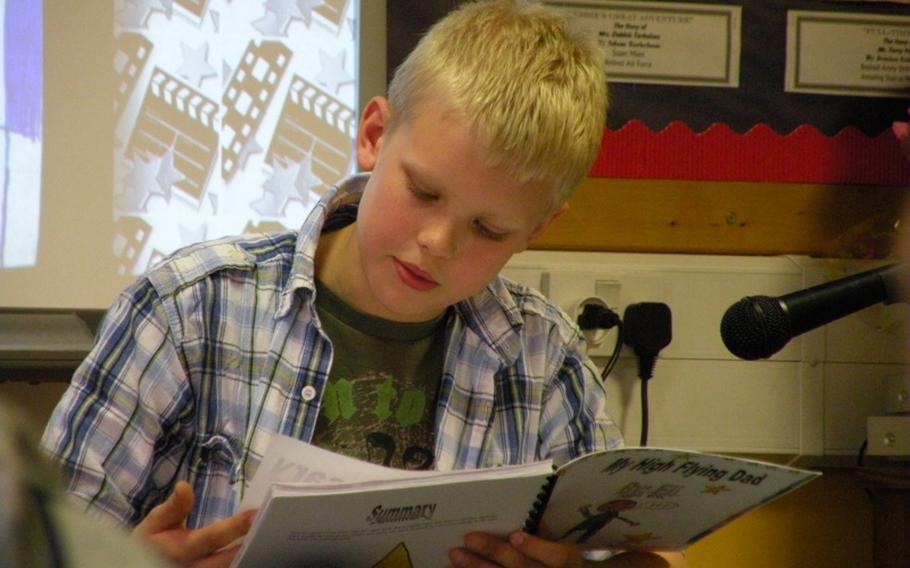 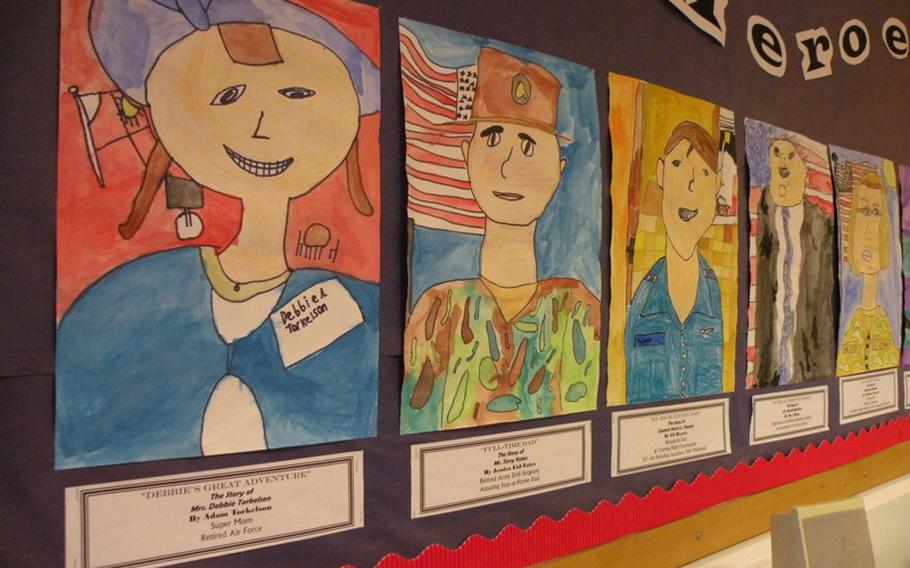 Buy Photo
Water-color pictures adorn the walls of Karen Griffis' classroom at Feltwell Elementary School. Each student painted a picture of his or her local hero for the authors tea. (David Hodge/Stars and Stripes) 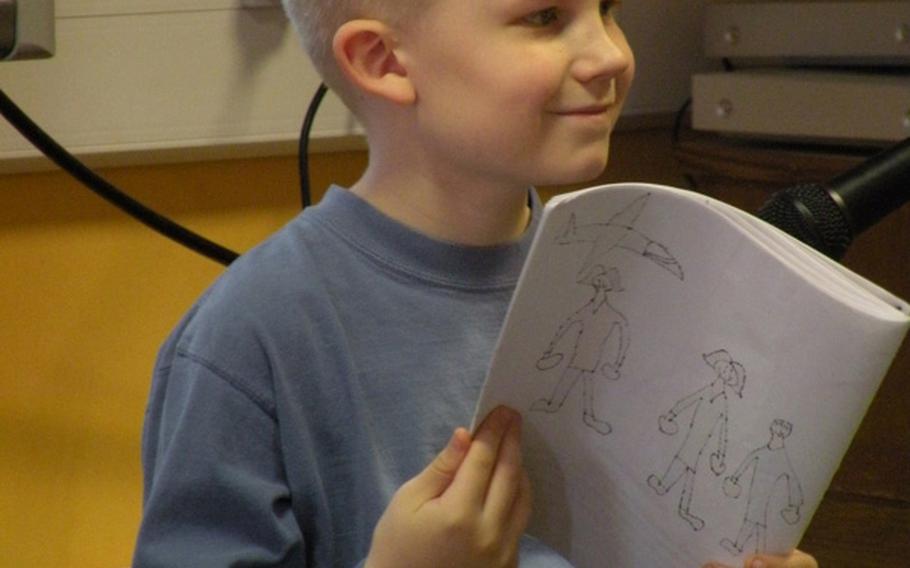 Buy Photo
Adam Torkelson pauses from his reading to look over at his hero, his mother Debbie Torkelson, during an authors tea on April 7 in Karen Griffis' class at Feltwell Elementary School. Adam and 21 other students created books about their local heroes for a project that Griffis also organized in classrooms in Japan and the United States. (David Hodge/Stars and Stripes) 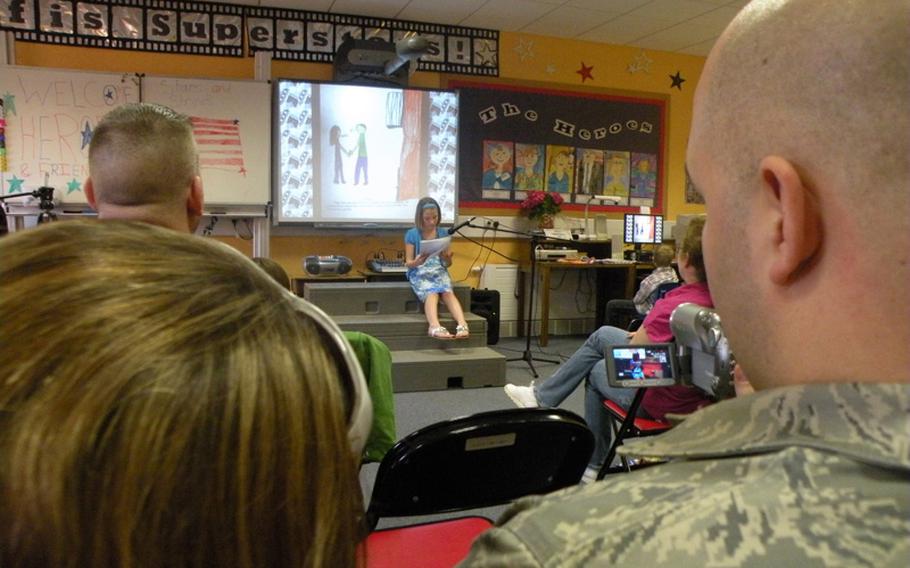 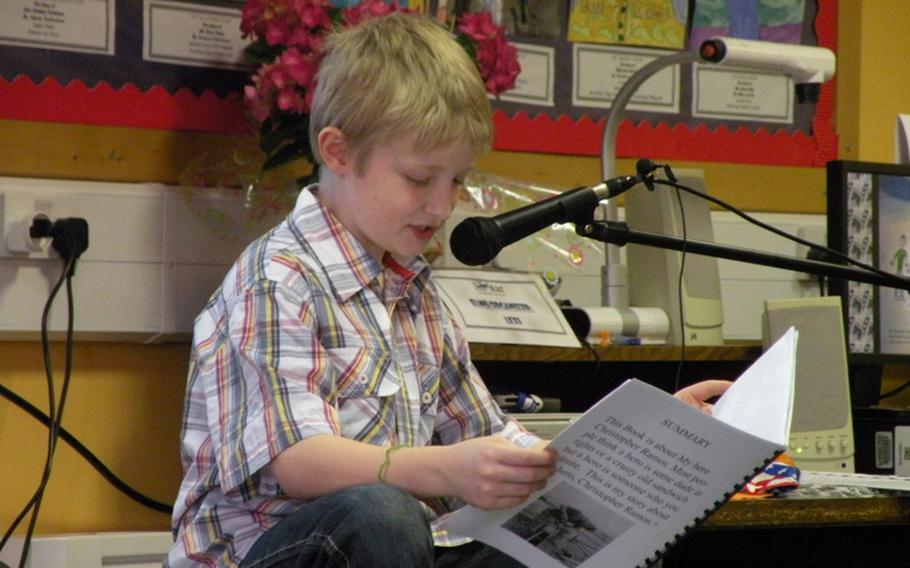 Buy Photo
Eoin Ramos reads about his hero, his father Senior Master Sgt. Christopher Ramos from the 352nd Special Operations Support Squadron at RAF Mildenhall, during an April 7 authors tea in Karen Griffis' multiage third- and fourth-grade class at Feltwell Elementary School in England. Part of the page pictured reads, "Most people think a hero is some dude in tights or a crusty old sandwich but a hero is someone who you admire." (David Hodge/Stars and Stripes) 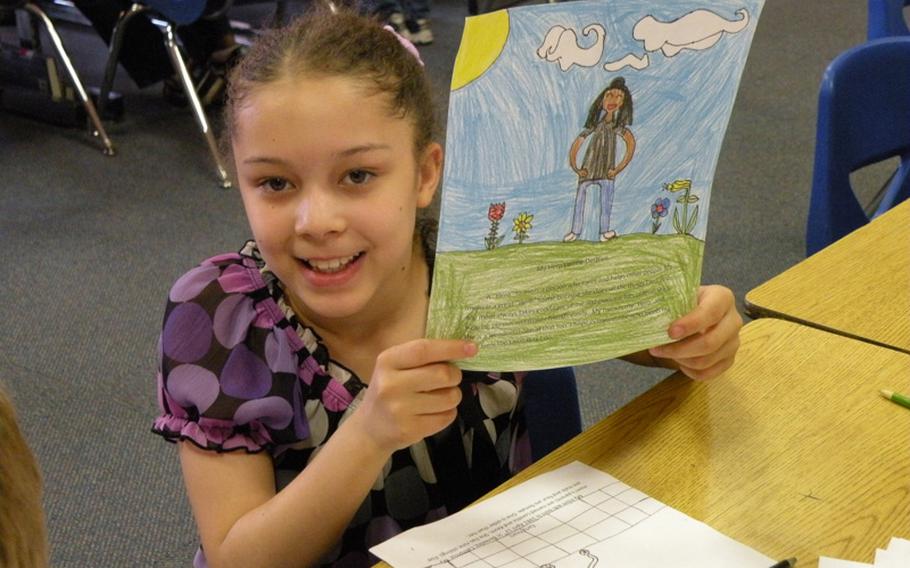 Buy Photo
Cherish Despain holds a finished picture of her mom, Lorene Despain, created as part of a project on local heroes by members of Karen Griffis' class at Feltwell Elementary School. (David Hodge/Stars and Stripes)

RAF MILDENHALL, England &mdash; Underneath a large banner that read &ldquo;Griffis&rsquo; Superstars,&rdquo; 22 third- and fourth-graders from Feltwell Elementary School publicly recognized their local heroes during an authors tea with family and friends.

And when the children read their reports on who their heroes were and why they were chosen, it ended up many had selected their own parents. The result was a touching and emotional presentation that brought tears and laughter to many of those gathered earlier this month in the classroom of Karen Griffis.

Student Ashlyn Gygi titled her book &ldquo;The Story of MSgt. Chad Gygi.&rdquo; In it, she describes her dad as helpful, smart and focused.

&ldquo;When he starts something, he doesn&rsquo;t give up,&rdquo; she read to the crowd. &ldquo;Like when he helped me with my science project. We stayed up till 9 p.m., and thanks to him I had the best one.&rdquo;

The children worked on their books for weeks, and contents included a biography, dedication page, author&rsquo;s page and a list of previous books written by the author. Also included were multiple hand-drawn and colored pictures.

While for the most part the messages had a serious and thoughtful tone, several made everyone in the room burst out in laughter.

&ldquo;The biggest challenge of his life was his mouth,&rdquo; Eoin Ramos declared in his book, &ldquo;The Story of SMSgt. Christopher Ramos.&rdquo; &ldquo;A lot of times he said what was on his mind before thinking it through.&rdquo;

Alexis Kimes said her father, Master Sgt. Gary Kimes, 351st Air Refueling Squadron at RAF Mildenhall, is always there for her &mdash; and he&rsquo;s always been a good speller. &ldquo;I got my dad&rsquo;s good-spelling genes,&rdquo; she stated.

Another student, Collin Snowsill, said his mother brings great happiness to his life &mdash; and his wardrobe. &ldquo;I dedicate this book to my mom because she cares for me and loves me very much and buys me clothes,&rdquo; he stated.

His mother, Mary, said his reading made her laugh and cry.

&ldquo;I learned that he is an amazing kid, and I am so proud of him,&rdquo; she said. &ldquo;He was brave and funny and so sweet.&rdquo;

To open the presentation, the students joined together to sing &ldquo;Hero&rdquo; by Mariah Carey, followed by a slide show in which they defined what the word hero meant to them.

While most students selected their mom or dad, some chose a hero outside their immediate family. One of them, Parker Mixon, picked Tony Mixon, his uncle, who has the genetic disorder neurofibromatosis type 2 and raises money for the cause by running marathons and endurance races.

Griffis, who said she received positive feedback from several parents, had sponsored this event for the last 15 years in the United States, and previously in Misawa, Japan, where she taught at Sollars Elementary School.

She said that six of the children&rsquo;s heroes were deployed, so she videotaped the child&rsquo;s reading and will mail the presentation to the parent.

On the second and final day of readings, the parents and students presented Griffis with a flowering plant and card that read &ldquo;To our hero. You are amazing. Thank you!&rdquo;