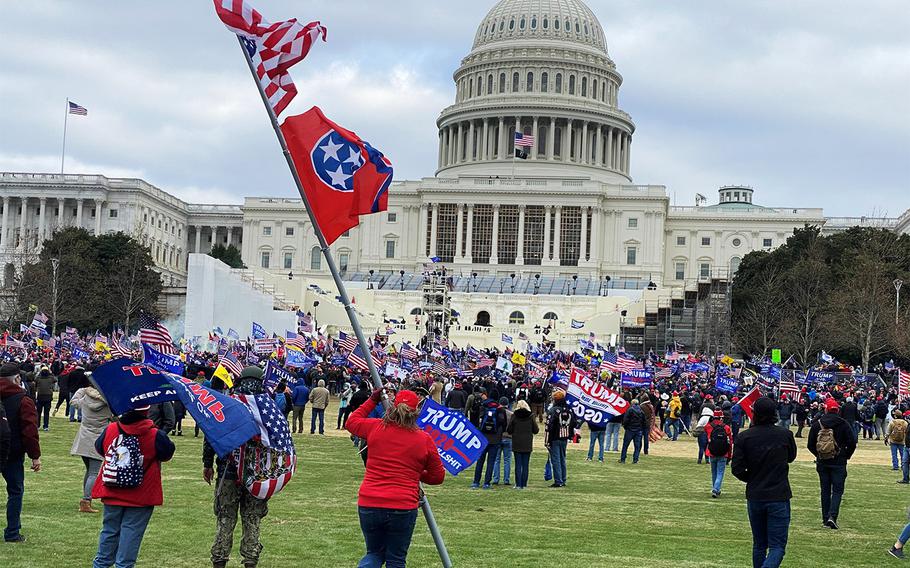 Supporters of President Donald Trump outside the U.S. Capitol on Jan. 6, 2021. (Robert H. Reid/Stars and Stripes)

WASHINGTON — Multiple veterans and service members are being investigated for their roles in the mob takeover of the U.S. Capitol building Wednesday, and at least two national veterans organizations want to ensure they’re not on their membership lists.

Disabled American Veterans, which has 1 million members nationwide, condemned the riots Saturday and announced its intent to remove any members found guilty in the attack. Supporters of President Donald Trump stormed the Capitol, resulting in five deaths.

“[W]e are saddened that any veteran would desecrate our nation’s capital and will take immediate action to initiate the removal of any DAV member found guilty of committing illegal acts against our nation,” said Butch Whitehead, national commander of DAV. “Such behavior is a disgrace to our national values and must not be tolerated.”

AMVETS, which has 250,000 members, decided to do the same. Any member who engaged in violence at the Capitol on Wednesday will be expelled from the organization by their local post, said Joe Chenelly, executive director of AMVETS.

So far, neither group has identified members who were part of the attacks.

Each time they hear of a veteran identified as a participant in the riots, DAV leaders run their names through the membership database.

“No matches yet, and we hope it stays that way,” said Todd Hunter, assistant national communications director for the group.

The Justice Department announced Sunday the arrest of Larry Rendall Brock Jr., an Air Force veteran who was seen wearing a helmet and tactical vest and brandishing zip tie handcuffs during the siege. He was arrested in Texas and charged with knowingly entering a restricted building without lawful authority.

Also under investigation is Capt. Emily Rainey, a psychological operations officer based out of Fort Bragg, North Carolina. The Army is investigating her for leading a group to the rally in Washington.

Two people who died in the attack were identified as veterans. Ashli Babbitt, an Air Force veteran who participated in the riots, was shot and killed in the Capitol. Before the attack, she used her social media to express her support for Trump and echo baseless conspiracy theories.

A Capitol Police officer, Brian Sicknick, died from injuries sustained while responding to the attack. Sicknick was an Air National Guard veteran with multiple overseas deployments. Capitol Police said he was hurt “while physically engaging with protestors.”