McDonough is sworn in as VA secretary; calls it the 'honor of my lifetime' 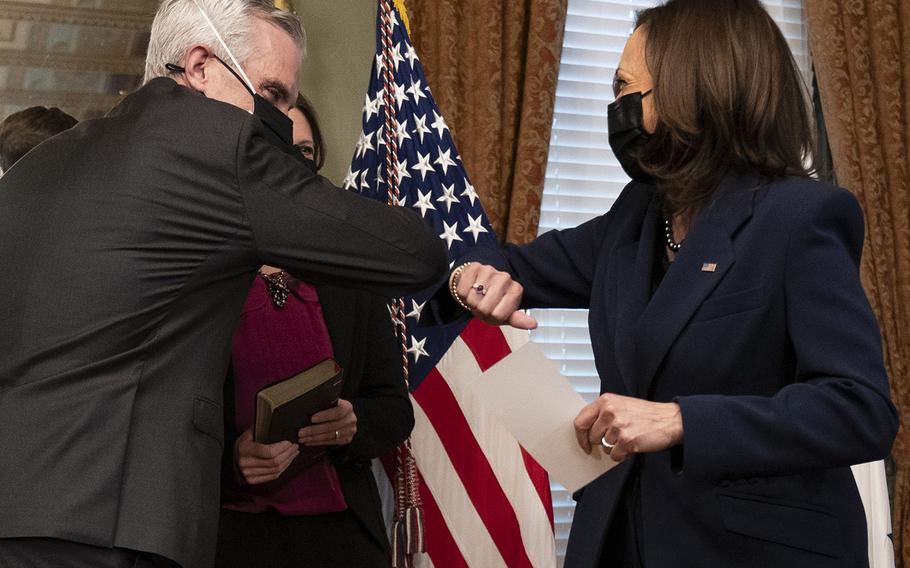 WASHINGTON – Denis McDonough was sworn in as secretary of the Department of Veterans Affairs on Tuesday in a ceremony conducted by Vice President Kamala Harris.

McDonough, former President Barack Obama’s onetime chief of staff, became the 11th VA secretary. He’s taking over the department as it faces the massive challenge of treating coronavirus patients and vaccinating millions of veterans and employees.

In his first statement as secretary, McDonough, 51, said it was the “honor of my lifetime to join the VA workforce in serving veterans.”

“At this moment when our country must come together, caring for you, our country’s veterans and your families, is a mission that can unite us all,” he said in a written message to veterans and VA workers.

He went on to say that he was committed to a diverse workforce and that he wanted to “provide a safe, inclusive” environment for veterans and VA employees. He vowed to make more of an effort to treat veterans who are survivors of military sexual trauma.

The Senate confirmed McDonough late Monday with a vote of 87-7. Those who voted in opposition, all Republicans, didn’t voice their reasons for doing so. McDonough is only the second VA secretary to face opposition in their Senate confirmation. The first was former Secretary Robert Wilkie, who received nine opposition votes in 2018.

McDonough is also only the second VA secretary to not have served in the military. President Joe Biden touted McDonough’s extensive government experience as qualifying him for the job. McDonough served as the principal deputy national security adviser under Obama before becoming his chief of staff. Before working in the White House, McDonough held staff positions in the House and Senate.

McDonough has said he can use his knowledge of the federal government tot “unstick” problems inside the VA’s sprawling bureaucracy.

Many national veterans organizations expressed confidence in McDonough’s ability to tackle challenges at the VA – and offered their own lists of priorities on which they think he should focus.

“Denis McDonough has the know-how and relationships to move the entire federal government, if needed, to help veterans,” said Joe Chenelly, national executive director for AMVETS. “That is an ability other VA secretaries have not had in the past.”

Another challenge facing McDonough is the implementation of the VA Mission Act, a bipartisan measure intended to expand veterans’ access to private doctors. Congress passed the bill in 2019, and the VA is still implementing it. Under questioning at his confirmation hearing, McDonough said private-sector care was an important part of veterans’ health care, but that he did not support “privatization” of the department.

Concerned Veterans for America, a conservative advocacy group, urged McDonough not to roll back the expanded private-sector care included in the Mission Act.

All of the groups asked McDonough for transparency and a close working relationship. Alma Lee, president of the National VA Council of the American Federation for Government Employees, which represents 265,000 VA workers, stressed mutual respect between the VA and the union, which she asserted was “nonexistent” under former President Donald Trump’s administration.

“VA workers have high hopes and expectations for Secretary McDonough and the Biden administration,” Lee said in a statement. “Our members welcome the new administration’s effort to turn the VA into a workplace that provides dignity, fairness and respect – the opposite of the previous administration.”

McDonough said in his statement Tuesday that he was impressed by VA employees and intended to be a “true partner” with them.

In addition to the VA’s core missions to provide health care, benefits and burial for veterans, McDonough said he would help veterans through the pandemic and create a welcoming environment at VA facilities for everyone, including women, minorities and LGBTQ veterans. He also intends to focus on helping transitioning service members build civilian lives, eliminating veteran homelessness and reducing veteran suicide, he said.

“President Biden gave me a clear mission — to be a fierce, staunch advocate for veterans and their families,” McDonough said. “His marching order to me is clear — fight like hell for Veterans. And we are going to fight like hell to give our veterans and their families the benefits, services, respect, and dignity they deserve. I fully embrace this mission, and I know the VA workforce does, too.”