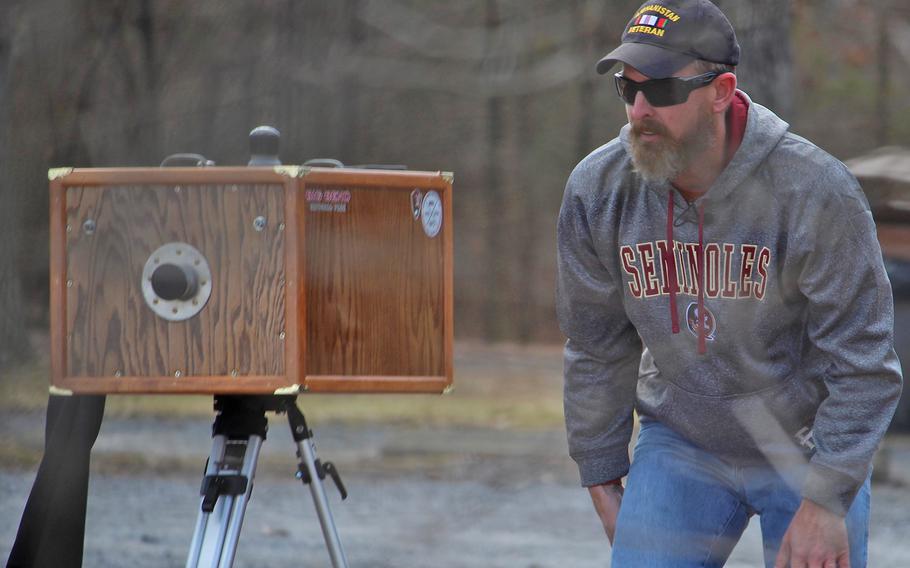 Marine Corps veteran Nick Collier is the first vet to participate in the artist-in-residence program at Gettysburg National Military Park. Here, Collier sets up a shot on Feb. 3, 2017. (Ken-Yon Hardy/Stars and Stripes)

Nick Collier has seen a lot.

As a Marine Corps infantryman, he saw combat action in Afghanistan in 2004-2005. He said he lost good friends downrange. Others came home scarred by experiences that few could even understand.

The horrors of war have sat with him for a while, along with the heartbreak of witnessing others cope with the aftermath of combat deployments.

“That kind of stuff weighs on you,” said Collier, who was with Kilo Company, 3rd Battalion, 3rd Marine Regiment. “It’s a lot to deal with.”

“That kind of stuff weighs on you,” said Collier, who was with Kilo Company, 3rd Battalion, 3rd Marine Regiment. “It’s a lot to deal with.”

Veterans have found different paths for help in processing those experiences. Collier has taken up the tools of an artist to deal with his pain — tools he once used frequently but set down as he focused on his military career. He has an art degree from George Mason University in Virginia and a master of fine arts degree from Florida State University — both earned after his time in the Marines.

Collier’s path led him to be the first veteran chosen for the artist-in-residence program at Gettysburg National Military Park in Pennsylvania.

“I’ve seen a lot,” Collier said as he set up an old-fashioned Afghan box camera to photograph a statue of Confederate Lt. Gen. James Longstreet at the park. “Art in general has helped me. It’s a way for me to work through some things … move on from things you do in war that aren’t permissible in society.”

Collier, 36, was awarded the residency in December and is spending a month at the Gettysburg battlefield — trading a current battlefield for a historic one.

As an interdisciplinary artist, his focus is on nondigital photography, sculpture and filmmaking. On a blustery day in February, he spent an hour taking photos with his homemade camera — made of oak, steel and brass — and eagerly showed off his black-and-white photographs of things many people pass without notice.

His residency culminates Saturday with a “meet the artist” event and display at the Gettysburg National Military Park Museum and Visitor Center.

While he said the residency program has helped him, his greater hope is that other veterans will apply to follow in his footsteps.

“Gettysburg inspires so much passion in our visitors today, and the artists-in-residence are providing new connections to people from all walks of life,” said Ed W. Clark, superintendent of the park. “Our artist-in-residence programs are engaging new audiences and connecting with visitors through the power and the passion of art.”

Clark points potential applicants to the Gettysburg program to the website — www.nationalparksartsfoundation.org/2017-our-residencies-page — where there are 18 different residency programs available.