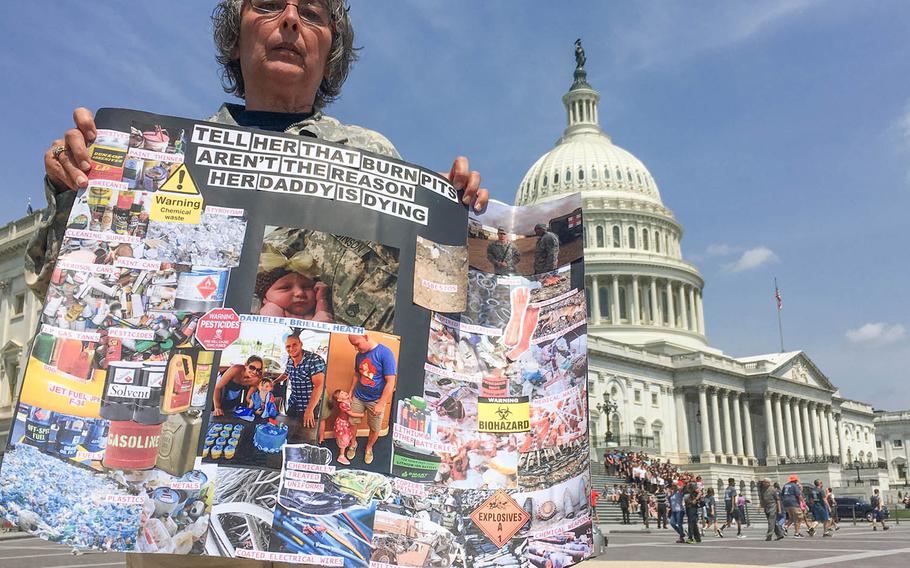 Susan Zeier holds a sign showing the different elements that were burned in pits. Her son-in law was diagnosed with cancer and it's believed to have been contracted due to exposure to burn pits when he was a soldier in Iraq. Zier was at a news conference in front of U.S. Capitol in Washington on June 7, 2018. (Michael S. Darnell/Stars and Stripes)

Susan Zeier holds a sign showing the different elements that were burned in pits. Her son-in law was diagnosed with cancer and it's believed to have been contracted due to exposure to burn pits when he was a soldier in Iraq. Zier was at a news conference in front of U.S. Capitol in Washington on June 7, 2018. (Michael S. Darnell/Stars and Stripes) 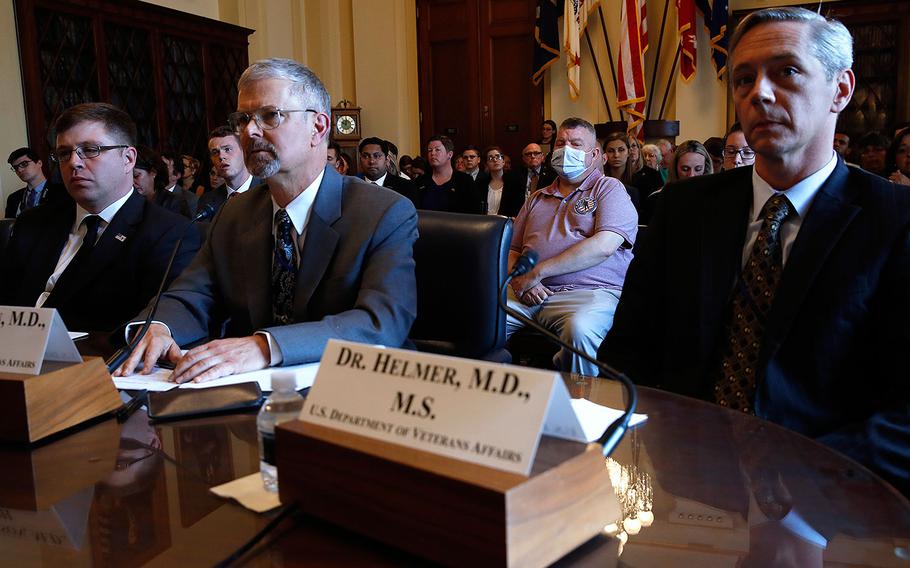 WASHINGTON — The Department of Veterans Affairs said Thursday it could take several years to complete research that could prove veterans’ long-term illnesses were caused by exposure to toxic burn pits in Iraq and Afghanistan. That proof could mean easier access to health care and disability compensation for thousands of veterans and their families.

Ralph Erickson, the VA’s chief consultant for post-deployment health, told members of the House Committee on Veterans’ Affairs that the VA is working on six studies and is trying to grow a registry created in 2014 to gather data from servicemembers exposed to burn pits.

“The VA is getting out in front of this as best we can,” Erickson said. “There are studies underway. What we’re doing is on the right track. We need to do this now. If we waited 10 years, it would be Agent Orange all over again.”

For many lawmakers and veterans, progress isn’t happening fast enough.

“There are veterans here who are wondering if they’ll be alive when these studies are complete,” said Rep. Tulsi Gabbard, D-Hawaii. “Peoples’ lives hang in the balance.”

Hundreds of open-air burn pits were used throughout U.S. military bases in Iraq and Afghanistan, releasing chemicals into the air from trash, human waste, petroleum, rubber and other debris. Troops exposed to burn pits have attributed medical conditions, such as respiratory issues and cancer, to the toxic fumes.

Veterans are trying to push the VA to recognize the connection between burn pits and various illnesses and make it easier for veterans to qualify for VA health care and disability compensation. The VA says there’s not enough evidence to show long-term health problems were caused by burn pits.

“There’s still a lot we still need to learn. We don’t have all the answers,” Erickson said. “At the present time we don’t have sufficient evidence.”

Veterans and families affected by toxic exposure in Iraq and Afghanistan filled the hearing room Thursday, hoping to bring more attention to the issue. One of them was Staff Sgt. Will Thompson, a former Army combat medic.

Thompson, 47, remembers the burn pit at Balad Air Base in Iraq. He woke every morning to the smell of the fumes, he said.

When he returned from a deployment in 2009, Thompson was experiencing breathing problems. At first, doctors diagnosed him with allergies and pneumonia before recognizing the issue was more severe. In 2016, he underwent his second double lung transplant. His body rejected the first set of new lungs, and he’s showing signs of rejecting the new ones.

Thompson is part of Burn Pits 360, a group of veterans and families affected by exposure who want more focus on the problem.

“My life is already done. ... I’ve accepted my fate that I’m going to die from this,” Thompson said. “I’m out here just to help the next guy and to help get the VA to recognize what’s going on and give assistance.”

Doctors haven’t told Thompson his ailments were caused by toxic burn pits, but he believes they were.

The VA created the Airborne Hazards and Open Burn Pit Registry in 2014, which allows servicemembers to document their exposure and illnesses and provide data to the agency. About 144,000 names are on the list, and it’s the agency’s fastest-growing environmental health registry.

Veterans and servicemembers who served in Operations Desert Shield or Desert Storm, Operation Enduring Freedom, Iraqi Freedom or New Dawn are eligible to sign up for the VA burn pit registry. Those who served in Southwest Asia after Aug. 2, 1990, or in Dijbouti, Africa or Afghanistan after Sept. 11, 2001, are also eligible.

However, the VA estimates there are 3.7 million more veterans and servicemembers eligible to sign up.

“It seems like just a drop in the bucket to me,” said Rep. Julia Brownley, D-Calif.

Erickson acknowledged that without more names, the VA “won’t be able to take this much further.”

Iraq and Afghanistan Veterans of America tried to drum up support this week for the Burn Pits Accountability Act, legislation introduced by Reps. Brian Mast, R-Fla., and Gabbard last month to grow the burn pit registry.

The bill would require the Defense Department to record whether servicemembers were based at locations where burn pits were used, and enroll them in the registry. Servicemembers could opt out.

“That’s a huge step moving forward,” said Melissa Bryant, IAVA’s policy director. “But it’s one incremental part of being able to get at the issue of burn pits and toxic exposures – we know there’s a lot more that needs to be done beyond it.”

Stars and Stripes reporter Michael Darnell contributed to this report.